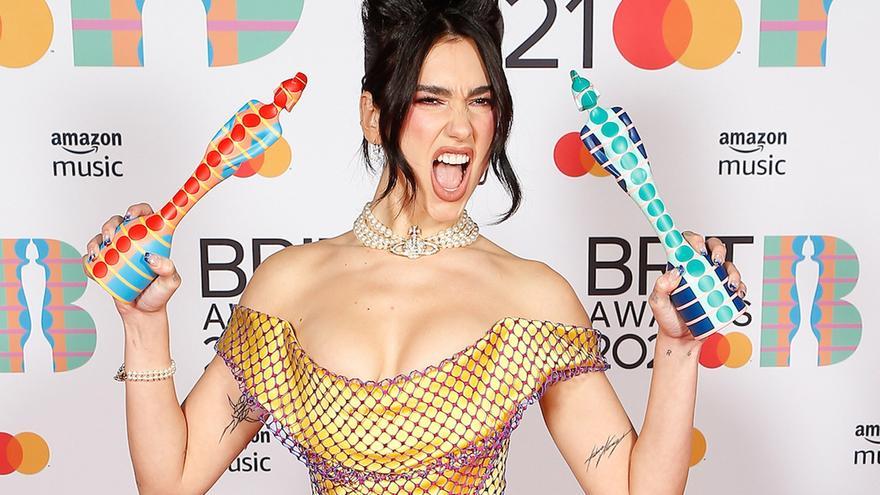 London, May 11 (EFE) .- Dua Lipa was crowned this Tuesday as the absolute winner at the Brit awards ceremony, adding to her record the award for best British female artist and best album for “Future Nostalgia”.

The British composer of Albanian-Kosovar origin starred in a gala that marked the return of live entertainment to the United Kingdom after the pandemic, and was a multi-colored outpouring of female empowerment in front of 4,000 attendees, mostly “essential workers”.

Coldplay opened the night with a memorable performance from a platform on the River Thames in front of London’s O2 Arena. With colorful fireworks and holograms they presented their new single “Higher Power”.

Dua Lipa took the witness dressed with the Union Jack, the British flag, while pretending to travel in a ‘glam’ version of the London Underground and performing some of her most famous hits, such as “Hallucinate”, “Don´t start now” or “Physical”.

Women were the main protagonists of the night and took most of the awards. In fact, four of the five nominees in the top category, Best British Album, were female.

Dua Lipa, who won two of the three awards she was nominated for, took advantage of her speeches to vindicate the role of women in the industry, as well as that of workers who have been on the front line during the pandemic.

“It is very good to applaud them but we also have to pay them. I think we all have to give them a huge applause and send a message to Boris [Johnson] that we all support a fair pay raise for those who are in the front line, “he added to cheers from the audience.

2021 was the year in which, after forty-one editions of the Brit, the Global Icon award went to a woman: Taylor Swift, the only artist who in less than a year has managed to place three of her albums in the number one on the UK sales charts.

“We live in a world where anyone can say what they want about you, but you have the right to prove them wrong,” he said upon receiving the award.

For its part, Little Mix was crowned the best British group and also made history in the Brit, being the first female group to win this award after 41 editions of the awards.

“It is not easy to be a girl group in the British music industry,” they admitted when collecting the award in a speech in which they spoke of the “misogyny”, “discrimination” and “sexism” faced by female artists.

The O2 Arena experienced a frenzied gala that featured, for the fourth consecutive year, the incisive humor of the British comedian Jake Whitehall, as well as the performances of Griff -awarded as a revelation artist-, or the promise of pop Olivia Rodrigo, who made his debut on British soil interpreting his well-known “Drivers License”.

One of the most special moments of the night, without a doubt, was the version of “It´sa sin” by êt Shop Boys by Elton John and Years and Years, which was reminiscent of the homonymous series on AIDS in the eighties and He highlighted the rainbow as a symbol of the British people during the pandemic.

Former ‘One Direction’ member Harry Styles and his “Watermelon Sugar” won the Brit for Best British Single and snatched the opportunity to take the triplet from Dua Lipa.

The voices of Rag N´ Bone and Pink, together with a gospel choir, put the finishing touch on a night that reminded those of yesteryear, without masks, or safety distance, and returned the illusion for music in a litmus test for British culture after the pandemic.