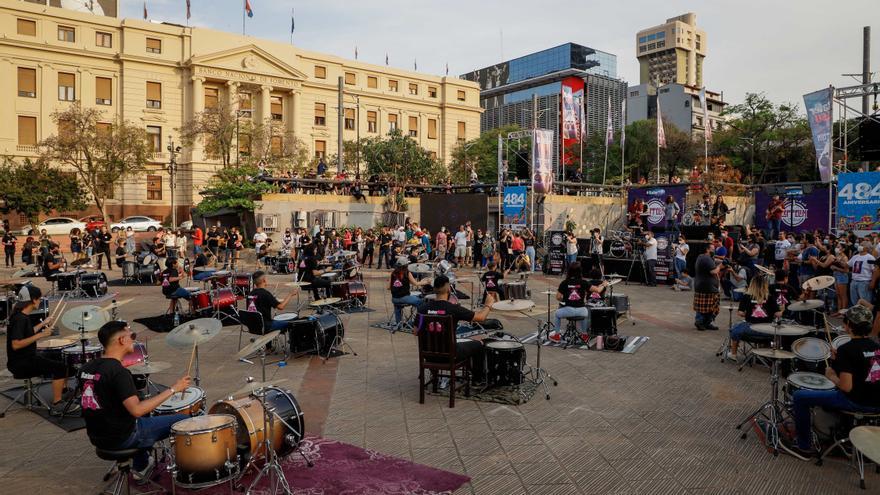 Asunción, Sep 18 (EFE) .- The Asunción microcenter was awakened today from its usual Saturday lethargy by members of the only recognized rock conservatory in the South American country, a shake that paid tribute to Led Zeppelin and which was joined by about thirty drummers who for the first time struck their drumsticks in unison in public.

All of them students of this instrument from the Zeppelin School Conservatory, born under the inspiration of the immortal legacy of guitar Jimmy Page, singer Robert Plant, bassist John Paul Jones and drummer John Bonham.

Hence, the letter of introduction in the Plaza de la Democracia del BaterAsu 2021 was an interpretation of several songs by the defunct British band, now reincarnated in CODA, the title of their last album before separating and the name of that group formed by Professors of the Conservatory.

However, the most anticipated intervention was that of the academy drum students, of all levels and some minors.

Among them the brothers Bautista and Facundo Díaz, 11 and 13 years old respectively and registered for six months, who played with rented batteries for the event.

The opening of the students was “We Will Rock You” by Queen, started with an explosion of raw drums and then accompanied by the support of CODA.

Led Zeppelin’s “Kasmhir” was the next song in that repertoire rehearsed for weeks and closed with AC / DC’s “Rock ‘n’ Roll Train”.

In addition to teachers and students, special guests joined CODA, musicians known in Paraguay as Beto Barrios, drummer of the Tierra Adentro group and the first drum teacher at the Zeppelin School.

Eleven years of activity with qualified teachers to create an innovative approach in the musical teaching of young people, children and adults from rock, a work recognized by the Ministry of Education, as appreciated by Gladys Rojas, its director.

“Rock and roll is culture and we made that very clear when we obtained the recognition of the Ministry,” Rojas told Efe.

The end of the event party corresponded to CODA alone, chaining a series of zeppelian classics such as “Blak Dog”, “Whole lotta love” or “Stairway to Heaven”.

And, of course, the self-referential “Rock and roll”, the anthem composed by the entire legendary British quartet.