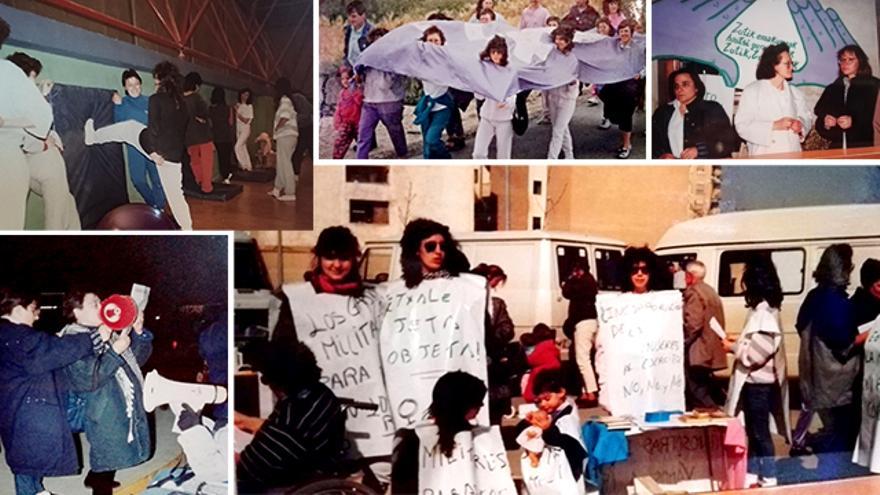 It could have been more than a hundred trips, but none kept track. In the late 70s and early 80s, women like Inma, Txaro and Toña organized to cross the border from Tudela (Navarra) to Biarritz (France) and help women who wanted to have an abortion when in Spain it was not yet legal. Organize the trip, start the car and hit the road with the address of the clinic written down on a piece of paper. If they stopped them, they said they were going on vacation or to see another friend. They were not simple drivers. By the time the journey began, of more than 200 kilometers, a very strong bond had already been established between the driver and the co-pilot. “We were never a mere means of transport. You did not meet a person who was a taxi driver, but there had already been some conversations and a deal,” says Txaro, a member of the Tudela Women’s Assembly, who participated in its creation in 1979. “You would make the trip of about five or six hours chatting with a friend and we would tell each other things or she would comment on whether or not she was nervous. And then, on the way back, the same thing happened,” he adds.

The three companions, who were in their early 20s at that time, remember those days with a smile on their lips, despite the fear they experienced when crossing the border and all that it meant for the girls who decided to have an abortion. But according to what they say, it was something that had to be done. There was no other option, they say during a video call. To attend the interview, they have stayed in the Tudela market and holding their cell phones, they answer all the questions with patients. The creation of the assembly, sexist violence, abortions in France and London. “In those years we started from nowhere. There was total repression,” Inma recalls. “We had to start from scratch on all issues. Divorce, abortion, even claiming a family planning center because there were no contraceptive pills or anything. We had to go clandestinely to get those pills from a doctor in Zaragoza.”

Inma, Txaro and Toña have known each other for more than 40 years working. They coincided in the factories of the area, in political parties and in the clandestine movements that emerged during the Franco regime.

“You were risking jail, but we had to accompany them,” says Inma. “Most of the time we went to Biarritz and, in some more exceptional cases, we went to London. But of course, that was already people with money. People who were even against abortion, but they had money and, when it was their turn, they they were going to London. People on foot, which we say, had to go to France, “says Inma, who remembers a trip mounted on a 600. At the border, they used to say that they were going on vacation or spending the weekend of week. “We always had a friend here and there”,

Until 1985, aborting in Spain was illegal, except for a short period of time during the Second Republic. In the mid-1980s, the law was approved that decriminalized abortion in three cases: serious risk to the physical or mental health of the pregnant woman, rape or malformations of the fetus. During the 70s and 80s, women who could afford it, because they had to pay for the trip and the clinic, went abroad to interrupt their pregnancy. Those who couldn’t afford it were forced into clandestine abortions.

“The first law that came out was a churro,” explains Toña, referring to the law of assumptions of 85. They received “with great disappointment” that first rule. “With everything we had been through … they started with the deadlines and that it was not for everyone. Although it did give a bit of an opening, because by getting hooked on these things, there were doctors and health workers who agreed.” With a legal framework in place, the subsequent steps were clear: expand access more and more.

For a long time, the Tudela Women’s Movement was a reference within the feminist movement of Navarra. The women came to the platform to request information and to ask for their help to go for an abortion. “Everything depended on the woman who was. There were women who consulted with their partner, so we went with the couple or they went alone,” says Inma. In other cases, they did not consult with anyone. “Neither with the husband, nor with the parents, or it was young people and we had to accompany them. With the management, well we would go there, setting up an alibi in case they stopped you at the border.” Before leaving, they had several meetings in which they all evaluated the situation.

They financed it as best they could and carried out the trips in hiding, with code names and with only one member of the platform per trip. “If there was a problem, it was always better for it to be just one, so that two of the assembly would not be charged,” reasons Toña. “I think the work we did on abortion was very important, but I believe that the commission of mistreatment was also a very important task.” Toña believes that, in some way, abortion has become normal, “although there are problems or doctors who do not want to do it.” However, he considers that sexist violence has not improved that much.

“I would highlight that the feminist movement had a generous attitude and with consequences in full secrecy,” says Txaro. “Most of the time it was financed, either by resources that the assemblies had, because we put a monthly fee, or because we raised money. Nobody paid us the trip. Neither the possible consequences, the risks.”

Inma, who called herself Sara, believes that, at that time, from the creation of the platform until 85, they were able to make more than a hundred trips to France. “You could get together in a month two, three or four. We attended to women not only from the surroundings of Tudela, but also from other places like Pamplona”, Txaro clarifies.

They became friends, they drove, they looked for the clinics to go to and even took care of the children of the women who had to go to France, because on some occasions, they came with their children and had nowhere to leave them so that no one found out. They always found solutions to all difficulties. “When you’re in trouble, you let go, you talk and you believe. Faced with problems, you create many bonds of union. And then, when we went with them, we went normally,” Inma highlights.

All three are clear that society would not allow taking a step back in terms of the abortion law, that is, they see impossible the return to a law of assumptions as suggested by PP officials such as the mayor of Madrid, José Luis Martínez-Almeida . “Today I think we would not let them take that away from us, we would go out on the street.” This was the case in 2014, when the then Minister of Justice, Alberto Ruiz-Gallardón, tried to implement a more restrictive regulation in the face of enormous social and feminist opposition that cost him his job.

They defended themselves against machismo and labor exploitation united in their platform, which is still in operation. “Women were not listened to or were little listened to. It was necessary for us to get together apart, to sit down and talk, to see our problems,” adds Inma. “There we met and so we continue. Then, we have been a group of friends who went to dinner on Fridays after the meeting. And we are still friends,” the three settle and look at each other accomplices before saying goodbye.

Tags: 80, abort, accompany them, drive, France, jail, we had, you played