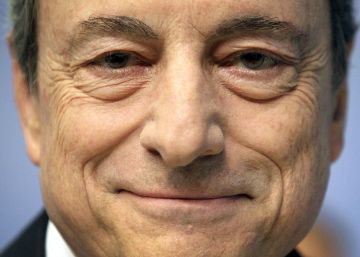 At the end of his term, Mario Draghi faces one of the most complicated dilemmas in his already energetic eight years at the head of the European Central Bank (ECB). The Italian who said he would do what was necessary to save the euro on Thursday beat the resistance of the hawks and launched an ambitious stimulus plan for a reluctant economy.

The measures include deepening the negative rates, postponing any increase until making sure that inflation returns to strength and retaking the debt purchase program that was abandoned at the end of last year and with which, because of the deterioration of the economy , Europe seems doomed to live together.

The ECB restores the debt purchase program worth 20,000 million euros per month from November 1 and for as long as necessary. These asset acquisitions will end "shortly before interest rates start to rise," the statement said. Here, Draghi has played balancing. The amount of 20,000 million is less than expected, but in return does not put an expiration date on purchases.

It also lowers the deposit facility – what is charged to financial institutions for leaving their inactive funds in the ECB – from the current -0.4% to -0.5%. This is the first rate drop in the eurozone since March 2016.

The news is not here. A change in the formulation of the statement announces that the era of ultra-low rates will lengthen more than expected. "The Governing Council now expects ECB interest rates to continue at their current or lower levels until it is appreciated that the inflation outlook converges robustly at a close level, but below 2%," says the organism. This apparent tongue twister means that the first rise will not occur from mid-2020, as the agency said so far, but is postponed sine die The prospect of uploads. It may seem only a change of words, but it is very important.

Draghi, who already has only the October meeting before the French Christine Lagarde assumes the presidency of the ECB, has had to face a tough battle against those who considered that the deterioration of the economic situation is not as serious as to justify taking out all the weapons battalion available to the monetary policy.

In favor of punching the table with an ambitious stimulus plan was, among others, the governor of the Bank of Spain, Pablo Herández de Cos. Against, apart from the usual hawks, like the German Jens Weidmann, the Frenchman François Villeroy de Galhau also stood. “The ECB's monetary policy is doing its job, but it cannot do everything. And of course you cannot work miracles, ”said the governor of the Bank of France and until recently one of the candidates to succeed Draghi.

The Spanish Minister of Economy, Nadia Calviño, admitted on Thursday the limits of the ECB's performance and asked to "calm" expectations about the measures. The acting minister admitted in the Cope that monetary policy has "little way to have an impact", and recalled that it cannot reactivate the economy alone, but that fiscal policy participation is also necessary. "There are no policies that have no contraindications or side effects," Calviño said about low interest rates.