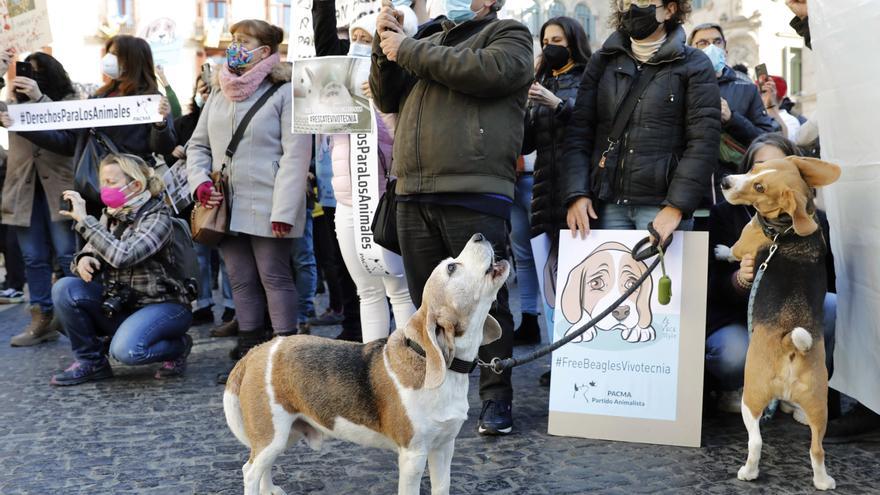 About 450 people, according to the Barcelona Urban Guard, have gathered this Saturday in Plaça Sant Jaume to protest the experimentation with thirty puppies of beagle dogs, that could end up sacrificed, in a pharmacological research project of the Vivotecnia laboratory.

With the slogan "Free Beagles Vivotecnia", the protest has been called by the pacma, which has raised the number of participants to a thousand, along with other animal organizations, to protest against the pharmacological project, which they assure will lead to the death of more than 30 dogs in a few weeks with which you are experimenting.

The pharmacological study is being carried out by the Vivotecnia laboratories in Madrid, commissioned by a company located in the Barcelona Science Park, from the University of Barcelona (UB).

The animal protesters have gathered behind a banner with the slogan "Enough animal abuse and they have raised signs with messages such as "Animal Lives Matter", "Stop Animal Torture", "Free the Puppies" or "Enough animal experiments, psychopaths".

The organizers of the protest demand that the 'beagle' dogs be stopped for experimentation with Vivotechnics and let the animals be releaseds, so that they can be put up for adoption.

In a statement, Pacma has denounced the "lack of interest and economic investment in the search for alternatives to animal experimentation" and remember that the percentage of failure of this type of project is 90% due to "incompatibility issues" between animals and humans.

According to the animalist formation, the "wave" of protest on social networks over the situation of the 'beagle' dogs and the international repercussion of the case leaves the University of Barcelona in a "very delicate position", which, according to Pacma, has approved the experiment with more than 250,000 euros of public funds.