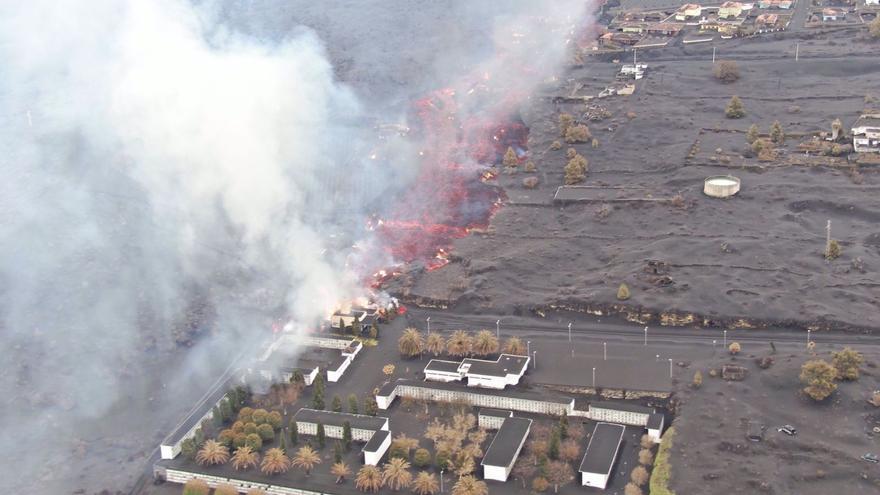 The effusiveness and explosiveness returned to the Cumbre Vieja volcano after several days of stability. This upturn in activity was accompanied by an increase in the emission of lava, which in its capricious advance towards the coast buried the Las Manchas cemetery. The Los Angeles cemetery had been besieged by lava for 59 days, practically since the second week of the eruption. A time in which the palmeros have been concerned about the future of the 5,000 graves with the 3,160 deceased who have been reburied. The Cogote mountain had acted as a containment dam, but the molten rock managed to pass it to the south, to devastate the cemetery, which is also the only one on the island that has a crematorium. This new flow springs from an emission center that was opened to the south of the main cone, as confirmed by Involcan. In this area, the lava travels 600 meters an hour and has also affected the photovoltaic plant, which had already been inoperative for more than a month because the 2,000 solar panels were covered by a thick layer of volcanic ash.

Early in the morning, a lava fountain gushed out from the Cumbre Vieja fissure, causing several overflows on the volcano’s slope. The layout of the new tongue of magmatic material is of particular concern to technicians because it runs parallel to colada ten –the one located furthest south– and heads towards El Corazoncillo and Las Manchas de Abajo, where there is an important scattering of houses and land. It has a large unevenness, so the lava could move at a higher speed. However, Miguel Ángel Morcuende, technical director of the Canary Islands Volcanic Emergency Plan (Pevolca), pointed out that although the magma that gushes out from the new mouth is very fluid, as it progresses it gains viscosity when it collides with solid material that slows its progress. .

The streams that have been most active in recent hours are seven, which flows into the fajana that grows on La Viña beach, and four, which runs between the mountains of Todoque and La Laguna. At these points, the lava destroyed 11.60 new hectares yesterday, with which the extension of land devastated since the beginning of the eruption rises to 1,100.44 hectares, 1.55% of the surface of La Palma. The maximum front of the lava tongues is already 3,350 meters wide.

Pevolca estimates that the cultivated land affected by the runoff reaches 340.59 hectares, 5.08 more than in the last record. Of these, 211.19 hectares correspond to banana plantations, 60.02 to vineyards and 26.4 to avocado trees. To this must be added 90 hectares of farms that will lose crops because they have been isolated and another 624 hectares (412 of banana trees, 128 of vineyards and 84 of avocado) covered by ash.

The latest update of the Cadastre data confirms that 1,484 buildings have been devoured by the tongues of molten rock. Of these, 1,195 are for residential use, 160 for agriculture, 67 for industrial use, 34 for hotels and leisure, 123 are infrastructures for public use and 15 for other uses.

The volcanic tremor and intermediate seismicity remain stable and at low levels. The deep seismicity (which is registered at more than 30 meters) has shown a slight decrease after the rebound that it had presented in recent days. The earthquake with the highest intensity that was confirmed yesterday was 3.9 and occurred at 7.53 hours, at a depth of 11 kilometers. Its epicenter was located in Fuencaliente and the population perceived it widely. The deformation of the terrain does not present novelties in any of the stations of the island.

The emission of sulfur dioxide (SO2) associated with the volcanic plume continues to be high, between 1,000 and 30,000 tons per day, and according to the analysis of satellite images, a downward trend has been perceived since last September 23, when an extremely high emission was recorded. . The diffuse emission of carbon dioxide (CO2) registers values ​​above the average. However, the Pevolca scientific committee insists that these emanations do not represent a danger to people.

La Palma airport was operational again yesterday, but with all flights canceled. Faced with the forecast that the conditions to operate safely will improve this Sunday, Binter has reinforced the connections with the Isla Bonita with eight new daily flights, with three more frequencies with Tenerife North and one more with Gran Canaria.

The number of people housed in hotels stands at 513, 8 more than yesterday, of which 72 are in Los Llanos de Aridane and 441 in Fuencaliente. The number of dependents housed in insular health centers remains at 43.

Heavy rains threaten the west of La Palma again, where 15 liters per square meter can be added in one hour and 60 liters can be accumulated in 12 hours. On the west side the situation will be even more complicated, as up to 30 liters per square meter are expected in an hour. The interaction between water and ash can lead to the formation of mud flows with enormous mechanical force, which is known as lahars, in areas of strong runoff, according to the General Directorate of Security and Emergencies of the Government of the Canary Islands. The rains can mobilize these materials deposited in the areas affected by the eruption and push mud through the natural slope of the land. Faced with this danger, the regional government recommends avoiding walking through ravines, valleys or natural and artificial channels, and traveling through riverbed areas or at the foot of steep slopes. | I. D