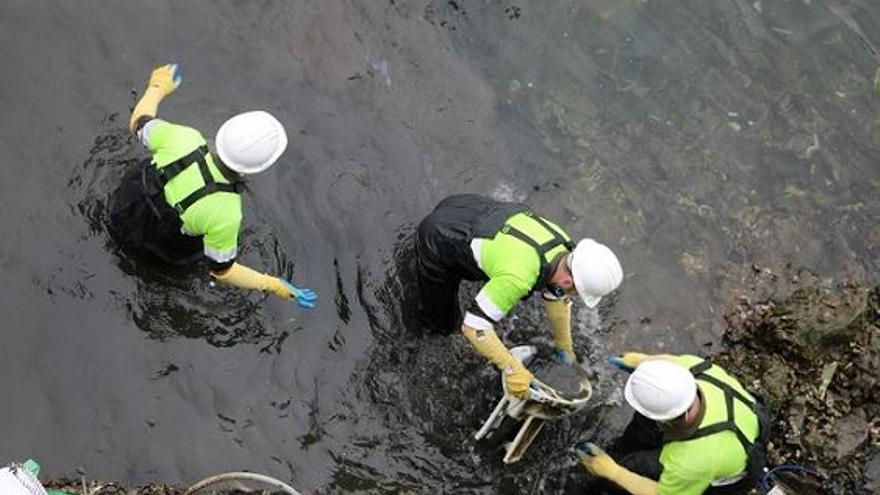 The poor condition of the Urumea River has been a very present issue among the San Sebastian society in recent months. Finally, the City Council has made the decision to take charge of its cleaning, approving an extraordinary budget at the same time as requesting a new agreement with the Basque Water Agency, URA, formerly in charge of carrying out the task, but with which there is no treatment since 2020. The collection has begun this Wednesday at two different points of the river between the bridges of María Cristina and Mundaiz, in which operators of the cleaning company subcontracted by the City Council, FCC, have started up. The collection is estimated to last about a week. In this first withdrawal, around 1,500 kilograms of waste have been removed, among which bicycle parts, radiators, mirrors, toilets and irons, among other things, have been found, according to reports from the City Council.

The traces of the calima in Euskadi, in photographs

On January 2, the environmental association Eguzki denounced this situation to the City Council, due to the reception of "calls and images" from many outraged citizens, contrasting them with more data, "they did not hesitate" to transfer the "unacceptable situation of the submarine dump". The City Council showed interest, but the urban maintenance councilor of the Donostia City Council, Miguel Ángel Díez (PSE), suggested that the doubt about the ownership of the powers is existing, so they could not “solve the problem” until it was clarified. Some of the rowing clubs that coexist with the river also made proposals on two occasions, once again without achieving anything. For this reason, they are the ones who have taken care of their cleaning altruistically, removing the garbage "as they could", organizing outings with volunteers who "clean from their own boats", indicate Ur Kirolak clubs.

From the opposition, the PP councilors Borja Corominas, José Mota and Mikel Lezama, tired of the situation, decided to go into the river to clean it up, and last Tuesday they got to work. Wearing wetsuits, two of them went down to the left bank of the river, where there was a lot of debris, and hooking them to a rope, they were pulled out by the third of them, located outside the river. The councilors posted their action on social networks, in order to "demonstrate that garbage can be removed from Urumea". Among the things they took out, a tricycle and a baby cart stand out.

At @PP_SanSebastianWe lead by example.
Little office and a lot of work on the street, in this case a lot of river work.
Summary of yesterday, where together with my colleagues the councilors @BorjaCorominas and @LezamaMikelwe remove waste of all kinds thrown into the Urumea River pic.twitter.com/mcIL6sgtGz

Faced with this notable discontent, the City Council has decided to act with the help of "a team duly equipped with helmets, boots and overalls", in addition to cranes and a truck to transport the bags of material removed to the clean point, "said the Councilor for Ecology, Marisol Garmendia. ”These operations are not improvised, they are not carried out from one day to the next. It's a professional retreat, it's not a circus. We are a public administration that must comply with all legal procedures, have economic and professional resources. It may have been delayed, but it is what corresponds to us, we are a responsible government“, commented Garmendia.

take care of the environment

In a context of greater citizen awareness regarding the care of the ecosystem, Donostia now finds itself with fauna that may be victims of said dirt and with potentially serious future consequences for the Urumea and the Cantabrian Sea. "It's not just a negative visual effect," says Garikoitz Plazaola, a member of Eguzki. Citizen discontent is also palpable. “Unacceptable” or “there is a lot to do”, comment some of the citizens. After more than ten years, a new cleaning "is more than justified," they add.

We need your support to continue producing quality content. You can register as a member or, if you already are, from your personal panel you can dedicate part of the quota specifically to your closest edition, to the one in Euskadi. Now we need you more than ever.

To stay by your side, we have a Telegram alert system with the latest information and our best topics and you can also find us at Twitter, Facebook and Instagram. And he remembers: Subscribe to our weekly newsletter if you want to receive a selection of content in your email box every Tuesday. For more information, we are at 625 88 87 80.