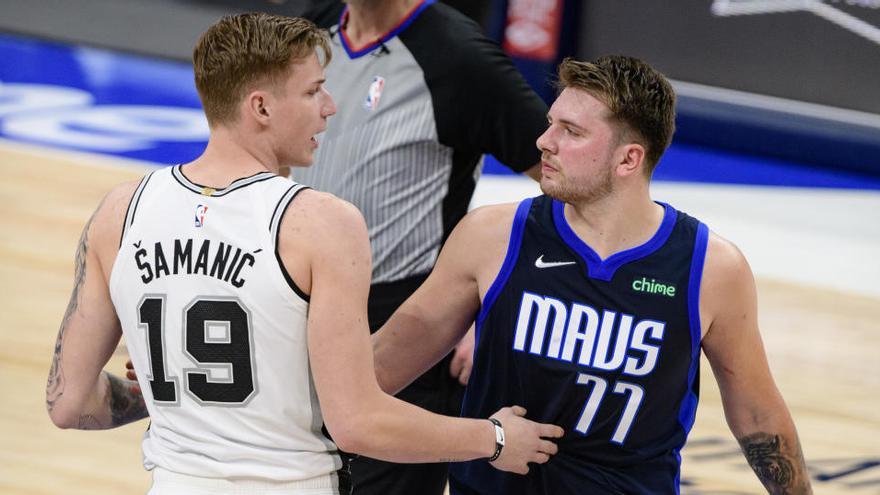 The Slovenian guard Luka Doncic returned to the competition of the NBA through the big door after the break of the 70th edition of the All-Star Party and with his triple-double joined the legendary Bob Cousy on the list of the best of all time.

In addition to helping his Dallas Mavericks team achieve the victory in the duel against the San Antonio Spurs and be within tenths of a percentage to lead for the first time since the season began in the Southwest Division.

Doncic was once again the leader of the Mavericks to whom he contributed a triple-double that helped them win 115-104 against the Spurs, in the duel of Texan teams with which the match began. second half of the NBA season.

The former player of the Real Madrid, which in the 70th edition of All-Star Party Last Sunday he was the longest on the track with Team LeBron, 32 minutes, and helped them win 170-150 against Team Durant, got 20 points, 12 rebounds and 12 assists.

The 22-year-old Doncic, who posted his 33rd triple-double, is now tied with the legendary Cousy for 11th on the NBA’s all-time list when He’s only been in the league for two and a half seasons.

The Mavericks star who played 39 minutes, scored 9 of 20 field goals, and missed 8 of 10 3-point attemptsWhile he did not have good control of the ball after losing it six times, but he made up for his mistakes and lack of scoring inspiration with the great work he did in other facets of the game.

The good defense that the Spurs players who scored him made him forced Doncic to not have his best concentration when shooting to the basket and they forced him to make mistakes.

But the Latvian pivot Kristaps Porzingis He also stood out as a franchise player and contributed a double-double of 28 points and 14 rebounds.

Porzingis, who underwent knee surgery this offseason, has double-doubles in three straight games and seven of their last 12 meetings.

The guard-forward Josh richardson He reached 12 points and along with German power forward Maxi Kleber, who scored 11 points and grabbed seven rebounds, he completed the list of the four Mavericks starters who had double-digit numbers.

Again, veteran guard DeMar DeRozan, with double-double of 30 points and 11 assists, finished as the leader of the Spurs (18-15), who lost the second consecutive game, and are still leaders in the Southwest Division, but only by two tenths of advantage over the Mavericks (19-16), who are second.

The Australian Reserve Base Patty Mills scored 14 points and power forward Rudy Gay, who also came off the bench, had 13 points and nine rebounds for the San Antonio team.

Before the game, coach Gregg Popovich announced that veteran center LaMarcus Aldridge, 35, in his sixth season at San Antonio, will be traded before March 25.

If in the end they do not reach an agreement with another team to Aldridge’s departure the team will terminate the contract for which this season he will have to receive a salary of 24 million dollars.

Another European player, the Lithuanian center Jonas Valanciunas He showed his best version and became the undisputed leader of the Memphis Grizzlies, who easily beat the Washington Wizards 127-112.

Valanciunas dominated in the inside game with a double-double of 29 points, his best mark so far this season, and he also tied the rebounds with 20 balls captured under the hoops, in addition to putting four blocks and distributing three assists.

Together with Valanciunas, the franchise base Ja Morant also stood out with a double-double of 21 points and 10 assists. that left him as director of the attack for the Grizzlies (17-16), who seek to reach a position within the top eight of the Western Conference that entitles them to be in the playoffs.

The Wizards had point guard Russell Westbrook as the leader by contributing a double-double of 20 points and 10 assists, but they did not prevent the defeat of the Washington team (14-21).