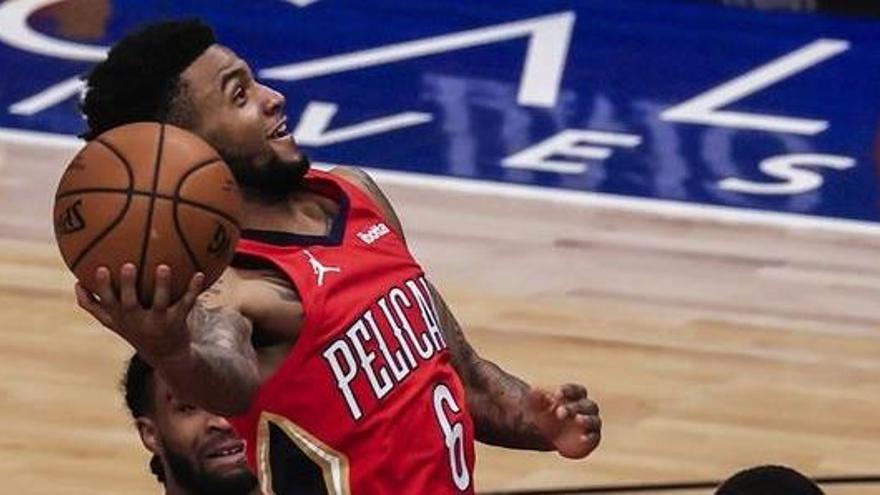 The Dallas Mavericks added their fourth consecutive victory against the New Orleans Pelicans thanks to a triplet recital by Luka Doncic and Kristaps Porzingis who scored between the two 82 of the 143 points that their team made, of which 39 were the product of triple shots.

But it is also that the Mavs added their highest number of triples scored, 25 of 45 attempts, which represents a 55.6% effectiveness from beyond the 3-point line.

Given that, the Pelicans could do little despite the fact that their star, Zion Williamson, finished the game with 36 points, 2 rebounds, 4 assists and 2 steals. For its part, the Spanish Willy Hernangómez, who is enjoying more and more minutes on the court, had 10 points, 9 rebounds and 3 assists.

The game was anticipated difficult for the Pelicans. The Mavs received them at the American Airlines Center in Dallas in their best moment of play since the beginning of the season, with three consecutive victories and an increasingly effective Porzingis.

The New Orleans team also arrived after breaking their four-game winning streak against the Chicago Bulls on Wednesday in part because of their inability to defend the three-point line.

And against the Mavs, that was precisely the biggest ailment for Hernangómez’s team.

The game began with a Porzingis in the vein, although the score was opened by Williams with one of his powerful innings that ended with a mate. The response of the Latvian center of the Mavs was instantaneous and a statement of what the rest of the game would be: triple from the roof.

Three attacks later, Porzingis scored his second triple. And on the next play he repeated with another hit from beyond the line of three. With a 14-11 score after just 2 minutes into the game, KP had already scored 9 points, all of them triple, and Doncic with 0 in his private box was more than happy to leave the role of the tall man.

When the first 12 minutes ended, the scoreboard marked a 27-37 lead for the Pelicans thanks to their two forwards, Brandon Ingram and Williams, who were the only ones able to keep up with Porzingis. Ingram finished the first quarter with 14 points while Williams added 10.

In the Mavs, Porzingis tried 9 triples in that period, of which he scored 4, and finished the first quarter with 15 points while Doncic made only 1 of the 4 shots he tried, which left him with 2 points.

But in the second quarter, Doncic woke up from his slumber and began to find space to score shots with his footwork: dash to the basket, hard stop, pivot, step back and basket.

The 15 points the Slovenian scored in the second quarter, including a 3-pointer, and Porzingis’s ERA, which scored both 3-pointers he threw in addition to one of his two shots of two, allowed the Mavs to go into halftime ahead 69 -65.

If Porzingis’s triples had begun to unhinge the Pelicans defense, Doncic’s moves and points ended up unbalancing the game in favor of Dallas.

After the break, the Pelicans seemed to regain some of their composure. The first three shots by the New Orleans men were triples made by Lonzo Ball, Eric Bledsoe and Ingram. But Doncic and Porzingis did not slacken and maintained their offensive success.

Midway through the third quarter, the Mavs had increased their distance to 9 points, 91-82. At that point, the Mavs triplet festival returned. Porzingis first twice and Tim Hardaway Jr. next put the lead on 12 points, 102-90.

Only a small reaction from the Pelicans in the closing minutes of the third quarter cut the gap to 108-101 in the period.

The New Orleans team were still within reach to erase the score in the fourth quarter. But Doncic did not let up and scored another 14 points in the last 12 minutes that made the difference at the end of the game.

Williams’ 36 points were insufficient although they represent a new scoring record for the Pelicans in the NBA.