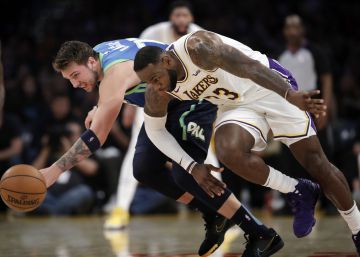 Luka Doncic expanded On a succulent date for your ambitions: before LeBron James, against the Lakers, a legendary team that has returned to the top at this start of the season, and at the Staples Center, a luxurious and emblematic court. The poster was most attractive, Prince Doncic against King LeBron. And Doncic, at the age of 20, at the start of his second season in the NBA, won the game and the game. It did not start well, but he refused and ended up as absolute dominator. He brushed his eighth triple double this season. He added 27 points, 9 rebounds and 10 assists, plus 3 steals and 7 losses. And next to him, a team that gave a feeling of solidity and was able to overcome with authority the Lakers, who dominated the League and had only lost two games.

LeBron James showed gestures of despair and helplessness. He realized that the Lakers were not able to be at the level of play of the Mavericks, which swept the second half, with a partial 38-55. They had the luxury of closing the game many minutes before the conclusion, when they came to dominate by 21 points (89-110). LeBron, who failed the five triples he threw, finished with 25 points, 9 rebounds, 8 assists, 4 steals and 6 losses. Anthony Davis also concluded with good numbers: 27 points and 10 rebounds.

Despite a good start of the Lakers (28-18), despite LeBron took a foul on attack on Doncic, and that of Anthony Davis He put a cap on the Slovenian, the Mavericks resolved the duel with an unexpected sufficiency. And they also exhibited the potential of their second unit, which was what matched the contest when Doncic and Kristaps Porzingis they took a break on the bench, with Justin Jackson, with 15 points, and Delon Wright, with 17 points, 5 rebounds, 9 rebounds and 4 steals, to the head. The Mavericks 'defense, often in the zone, did a lot of damage to the Lakers' attack, misguided in the shot, with a 7 of 27 in the triples.

It was the second time these teams were facing this season. In the previous one, in Dallas, they won the Lakers (110-119) in a match in which both stars concluded with a triple triple: 39 points, 12 rebounds and 16 assists by LeBron and 31 points, 13 rebounds and 15 assists for Doncic. In the second duel between both teams, the Mavericks and Doncic gave a blow of authority on the leader's court and one of the big favorites this season.