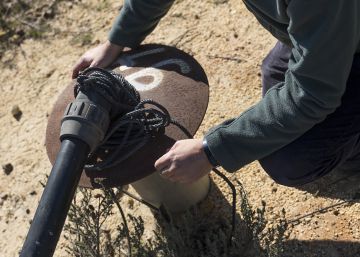 "Now that there is no mobile recording," begins Alberto Fernández, vice president of the Huelva PP, his speech. "There is not one thing that fucks a politician more than (the citizens) are in the street, that they hit him four screams", explains Fernández to the farmers of Lucena del Puerto (Huelva). "So that's where you have to keep fighting, splitting your face, you're acting like a motherfucker and nobody takes that away from you," the politician concludes.

It was the 4th of July. And the Huelva PP decided to visit these farmers "affected by the closure of the wells," according to popular reports. The problem (besides that there were several mobile phones recording) is that, in truth, the one that is most affected is the aquifer from which the Doñana park is fed, which has entered into a situation of overexploitation after years of illegal harvesting. And one of the black spots is, precisely, Lucena del Puerto.

A week before the visit of the popular leaders, the farmers of Lucena del Puerto prevented the technicians of the Guadalquivir Hydrographic Confederation to proceed with the closure of more than a dozen illegal wells. The technicians, who were accompanied by agents of the Civil Guard, could not make that closure (which had ordered the High Court of Justice of Andalusia) due to the large number of farmers and residents of Lucena that were concentrated in the area.

That is the context in which the visit takes place, and the harangue of the vice president of the Huelva PP, which encourages farmers to continue pressing, in addition to launching insults against the ecologists and political representatives of the PSOE.

"It is inadmissible that a public official encourages to break the law and encourages the execution of a sentence to be prevented," laments Juanjo Carmona, a member of the office that the environmental NGO WWF has in Doñana. "Violence is being incited against the state security forces that are going to close a well," he adds. "They are asking that the law be broken," he concludes.

WWF is the NGO that has been reporting the illegal water withdrawals of Doñana for the longest time. These illegal wells have made the European Commission denounces Spain before the Court of Justice of the EU. Also, Unesco (Doñana is a World Heritage Site) has announced that will closely monitor the park's situation for the theft of water, which has been carried out almost with impunity for more than a decade.

The Minister for the Ecological Transition in functions, Teresa Ribera, also reacted this Saturday through Twitter after releasing the video: "Encouraging to remain in illegality and attacking who defends public goods is a great irresponsibility and the worst way to face problems ". "We will act to enforce the rules," added the minister, who has also said that they will be "open to helping those who need it, always within the law."