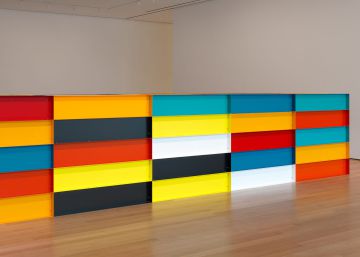 Now that the world is turned upside down and our existence seems to pass in a paradoxical dream (REM), it is a good time to approach the artistic creation of the last half of the 20th century from specific authors and not from currents and movements, terms of Yes elusive because the river is not still and it never rains to everyone’s taste. On Donald judd (1928-1994) shots, cats, dogs and part of the critical animal have fallen, when in truth he never considered himself a sculptor – “my works are not sculpted”, he said – nor a minimalist, but an artist-philosopher who wanted occupy the space with objects that express certainties. Judd believed that the world should not be explained from a pre-existing rationalistic logic but by something simpler, putting one thing after another, like a child’s game, a concrete object next to or on top of another forming columns of air, rows of boxes, attached to the wall or on the floor. From the “existence” of each of these objects and from the regularity of the intervals, the meaning of the act of placing or ordering them had to be extracted. For those who were considered the ringleader of the coldest season in art, it took only a snow plow to erase the symbolism of all artistic creation.

Wait a minute: what does a Duchampian object have to do with Donald Judd’s work? Well, it serves to explain an exhibition that cannot be seen in the most important art museum in the world, in addition to provoking a reflection that disturbs apriorisms, such as that Donald Judd was a minimalist. The reader is warned that the object ready-made signed by Marcel Duchamp in 1915 it does not appear in the credits of Judd, the exhibition that was opened and closed almost at the same time last March at MoMA (although a digital version of it can be visited on its website until July 11), but it is implicit as something Lacanian and as absurd as the invitation to “navigate” through a retrospective – the most complete of the last thirty years in the United States – that would require the presence of the viewer, because if something Judd was looking for it was not Make visible the interior space in a way, but the exterior, its occupation in real space.

About him ready-made of the snow plow, Judd owned a copy (Duchamp’s title was In Advance of the Broken Arm, or Broken Arm Advance) that he would have carefully installed in a corner of his studio at 101 Spring Street in Soho. Judd was the first artist to move to the middle abandoned neighborhood that, decades ago, had been a prosperous manufacturing district, so by dint of not wanting to be minimalist, he became a champion of a socio-urban movement that started in New York and has spread globally, the sohoization. In 1968, after taking over a five-story building for $ 70,000, he settled there with his wife, the choreographer and dancer Julia Finch, and their two children, Flavin and Rainer. In his study, next to the famous snowplow, some fluorescent tubes hung from his great friend Dan Flavin, an architect and designer like him and one of the dismembered minimal family.

Judd graduated in Engineering and completed his Philosophy training at Columbia University, where he was a student of Meyer Schapiro. He published more than 600 reviews as an art critic, was an essayist, draftsman and, above all, one of the most respected artists in a few years when America was a creative turmix, with pop, conceptual-feminism, post-minimalism, land art, shareholderism. What could unite a ready-made and a fluorescent tube that could be bought in any branch of the industry? Both are abstract data, nothing anecdotal (unlike the Shine boxes or Warhol’s Campbell’s cans), convey the idea of ​​simple exteriority, without formal references to the human figure, ideology or literature (to understand us, art could not be narrative like that of Anselm Kiefer, but it could be like that of Yayoi Kusama, Lucas Samaras or John Chamberlain). Judd wanted his work to have the clarity of thought of mathematics and physics. They were not silent forms that floated in space but investigations where an object defines the space it occupies.

His work is not structured from the psychological but from its cultural nature. The specific objects Galvanized steel or plywood (as he called them in his 1964 essay) are devoid of symbolism, the volumes and voids of their piles and serial structures, of generally sharp contours and angles, are projected and multiplied, they are the metaphor of the dependence of the work on the space conditions. The basic unit of the piece is its non-manipulation (Judd drew the work with the instructions he gave the manufacturers about the material and the shape) and his attention to color was that of a painter, achieving a unique configuration, from a small scale –A drawing– to the architectural ensemble, like the ones he did for his two foundations, the Judd and the Chinati in Marfa, in the Chihuahuan desert. Nothing less minimalist than its will to constantly expand. And the need to explain his work in times of confinement.

It is 50 years since the death of José Mata, the last Canarian bullfighter