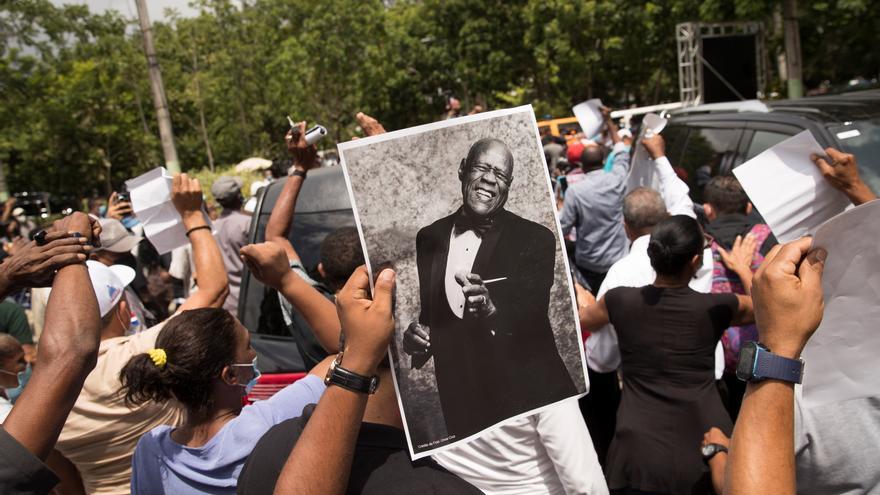 Santo Domingo, Jul 31 (EFE) .- The legendary Dominican merengue player Johnny Ventura was buried this Saturday after a tremendous farewell offered by thousands of people who took to the streets of Santo Domingo to sing and dance to his music as a way of giving back to the “Horse Greater “the joy that he provided during more than 60 years of career.

Ventura, who died last Wednesday at the age of 81, mischievously sang to women, to social causes, to the street vendor, to the cane cutter, who recorded multiple allegorical songs for Christmas.

The “King of Merengue” received a goodbye the size of his dimension as an artist. A fulminant myocardial infarction deprived him of continuing to offer his art to the world.

“I ask my children to follow the example of their father, I have been surprised with the support that the people gave my husband,” said the interpreter and composer’s widow, Josefina Flores.

The artist will rest very close to the grave of former political leader José Francisco Peña Gómez, with whom he shared a friendship of several decades.

“Johnny Ventura had a natural gift, a great smile, a captivating presence, an unparalleled charisma and with that he conquered the hearts of the Dominican people,” said former President Leonel Fernández, when delivering the eulogy.

The burial took place almost five hours later than scheduled, due to the crowd that accompanied the singer to his last resting place.

During the funerals at the Palacio de los Deportes in the capital, the deceased’s orchestra played the chords of the merengue “Amorío” in the venue, while photos and videos were projected on a giant screen that included some of the most stellar moments of the legendary artist.

Citizens of Colombia and Venezuela were observed at the scene who, with their respective flags, showed respect and admiration for Ventura’s legacy.

“Johnny Ventura was the one who taught Venezuela to know the merengue,” said a woman as they passed the coffin.

Minutes later, a man played a güira, an instrument that Ventura played in his early days in music, in the early 1960s.

A striking moment occurred when a video was projected on the screen in which the “Papá del merengue” and his orchestra accompanied the Cuban singer Celia Cruz to interpret “El guabá”, one of the two meringues that the star recorded in life. of the sauce.

THE PEOPLE “OWNED” THE COURTESY

The funerals were held at the Palacio de los Deportes, in the center of the capital, in which the Dominican president, Luis Abinader, and his wife Raquel Arbaje appeared.

Later the body was transferred to the populous neighborhood of Villa Juana, where Ventura lived his childhood and youth years.

Traffic slowed, as dozens of vehicles and people on foot joined the march of the float, while the photos and videos with cell phones did not stop.

Once in the neighborhood, a “human tide” gathered in the streets to bid the “Caballo Mayor” last goodbye, playing his records in the grocery stores while many people danced and waved from the balconies.

“Johnny, Johnny”, chanted many people as the procession passed, to which they threw white flowers, under a persistent drizzle that later stopped and left the sky overcast.

Traffic agents tried with little success to speed up the journey to the Cristo Redentor cemetery, but the crowd had already taken to the streets displaying photos and messages of gratitude towards the multi-award-winning interpreter.

“The handle”, “The tobacco”, “The cuabero”, “Did you whistle?” or “When I die”, they were among the meringues in Ventura’s voice that were heard at high volume as the caravan passed.

The citizens of the capital took to the streets as they have done in the funerals of other great Dominicans, in this case with the purpose of staying as long as possible with Ventura’s body.

Over several kilometers dozens of people were posted to greet the procession by raising their hands, dancing, waving the national flag or simply looking at all that crowd.

Surprisingly, many traveled the journey to the cemetery – some 14 kilometers away – on foot, with masks and under high levels of humidity. Others rode cars and motorcycles. There were also those who did not wear masks, despite the covid-19 pandemic.

Artists such as Juan Luis Guerra, the American-born rapper Cardi B, the Venezuelan Ricardo Montaner, the Puerto Rican-born salsa singer Marc Anthony or the Dominican-born bachatero Romero Santos, have lamented the death of Ventura, considered the most important merenguero of all times of the Dominican Republic.