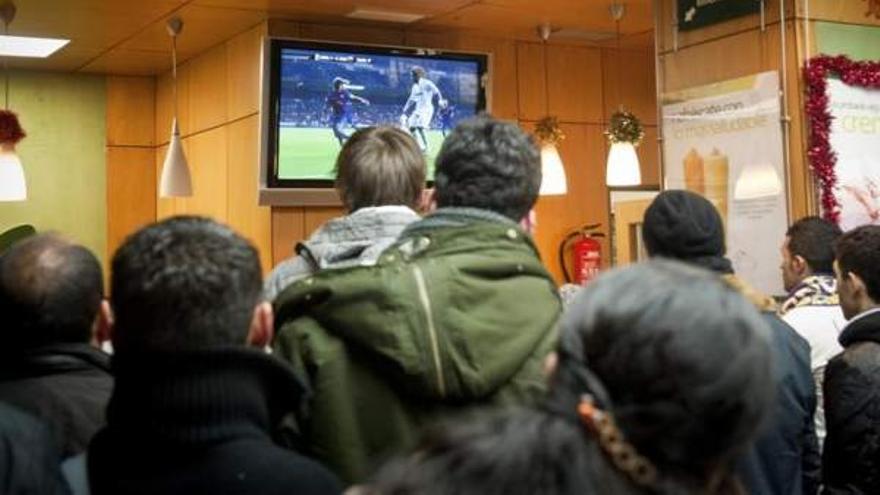 Football television rights move several billion euros each year. Just a few weeks ago, La Liga announced the sale of the audiovisual rights of the first division for five seasons for almost 5,000 million euros to Movistar and DAZN, a media conglomerate owned by the British First Fortune. And a fundamental focus of the business are the bars, where, according to various surveys, several million people come each season to watch their team's games. Most of them pay special fees to the platforms to offer the games as a claim to their clients, but there are also many who are looking for shortcuts to get the signal. Different courts study the complaints of La Liga against piracy. And the sentences that are being known do not agree: there are sentences with prison sentences and mere fines for minor crimes.

The case that has uncovered the judicial controversy is that of a bar in the Madrid neighborhood of Vallecas. La Liga inspectors verified in October 2018 that this old town brewery was using a 'Quiart' decoder to allegedly watch football without paying the platforms. The body directed by Javier Tebas filed a complaint with the Judicial Police and a few months later the agents verified that, indeed, the device worked and was used to watch football without paying any official subscription, although it was turned off when they entered the bar.

At first, the decoder cost him a year in jail, a fine of 2,160 euros and the obligation to pay 628 euros to La Liga for a crime against intellectual property and another minor one against the market and consumers, in line with the accusation of the Prosecutor's Office and La Liga. That's where the conflict began, because as the Provincial Court of Madrid now recognizes, this "is not a peaceful issue." Some courts are committed to including the crime against intellectual property in the sentence and others to leave piracy as a minor crime. The difference is important: from a crime punishable by up to 4 years in prison to another that, at most, carries a fine.

The Provincial Court of Madrid, with Antonio Viejo as rapporteur, has opted for the least serious option and understands that it is a minor crime against consumers because, as it understands, televised football matches and sporting events in general cannot be considered artistic, scientific or literary in legal terms and that closes the door to conviction for the crime against intellectual property.

One of the most voluminous cases of this criminal prosecution against soccer piracy took place at the end of 2019 when the National Police launched 'Operation Themis' against several thousand premises throughout the country for this practice with hundreds of illegal decoders seized. La Liga estimates that in Spain some 60,000 venues broadcast football irregularly, half of all those that offer matches to their customers, most of them with pirate decoders, as explained this information from El País of the "It's La Liga" section. In some courts of the country his accusation for the most serious crime has prospered but in others the punishment is much lowered.

This ruling by the Court of Madrid prevents the owner of the Vallecas bar from entering prison by attributing only one crime against consumers and imposing a fine of 180 euros in addition to reducing the compensation for La Liga to 196 euros. The judges acquit him of the crime against intellectual property, which had led to a one-year prison sentence by the criminal court.

The Provincial Court of Madrid rejects in the first place part of the arguments that the owner of the brewery raised in his appeal: it assumes that he knew perfectly well what the decoder installed on the local television was for and points out that none of the accusations directed against him had prescribed during the judicial process. But the claim of the hotelier prospers in his final allegation: the television broadcast of a football match does not constitute an artistic work or performance.

The judges analyze both the royal decree approved by Minister Wert, which in 2015 regulated the centralized sale of football television rights as well as the Intellectual Property Law 1996 and concludes that pirating football broadcasts does not infringe the intellectual property of the owner of the rights. "A transmission or broadcast carried out by a broadcasting entity is not in itself capable of being classified as artistic, scientific or literary", explains the Audiencia de Madrid, with the exception that it is the retransmission of something artistic such as a concert or a opera, he says.

To interpret otherwise, says this sentence, would be to go beyond what the Government itself did in the 2015 reform and would also be to twist the Law against the accused. "If the legislator tried to include sports broadcasts as an object of criminal protection, he only had to add the adjective "sports" to the adjectives used, or he simply could not have used the term benefit as an adjective," the judges explain. "Pretending that when the legislator says literary, artistic or scientific provision means provision of any kind, including the retransmission of a sporting event, an extensive and contrary interpretation is being carried out," the resolution settles.

The judges analyze several cases studied in other courts that support their theory. Records of the Courts of Pontevedra and Madrid that, among other cases, endorsed that the owners of bars in Vigo and Getafe were tried for a minor crime and not for one against intellectual property as requested by La Liga and the Prosecutor's Office in both processes.

The case of the bars that use pirate decoders constitutes one of the few cases in which the criteria of the courts are openly contrary, and for a long time, to what the Prosecutor's Office defends. The criterion of the Provincial Court of Madrid has been established for several years: in October 2019, the sectoral board of magistrates of the criminal sections established in a clear manner that "the conduct consisting of broadcasting football matches in public establishments without authorization must be subsumed in article 286.4 of the Penal Code". That is, a minor crime and not a serious one against intellectual property.

A position that collides head-on with what has been defended by the Prosecutor's Office for more than five years. In its circular 8/2015 published at the end of that year, the Public Ministry, then headed by Consuelo Madrigal, explained that the recent reform of the Penal Code also protected sports broadcasts under the umbrella of intellectual property: "It will allow such services to be protected, although neither the recording nor transmission were intended to be an intellectual work, since those deserve protection autonomously and regardless of their content; thus, for example, the retransmission of a sporting event, a contest, a debate...", he said the Prosecutor's Office six years ago.

The difference is important. A minor crime against consumers of article 268.4 of the Penal Code carries, at most, a fine of up to 12 months of quota, which can only translate into an entry into prison if it is not paid. A crime against intellectual property of article 270.1 of the same Law carries sentences of up to four years in prison and double the amount of fines. In the case of this Vallecas brewery, in addition, the judges take into account that the damage to La Liga was only one month, the only thing that the National Police agents could prove.