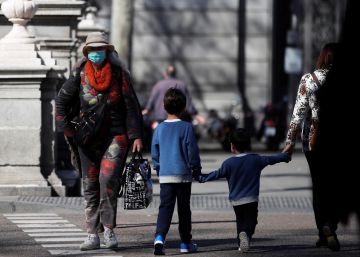 The state of alarm, the prohibition of moving on the street and the fear of contagion installed in many families has triggered the legal consultations of separated mothers and fathers with children on how they should manage the visitation regime for minors. Is what is established in the agreement maintained even if it is difficult to apply? What if one of the two parents has a risky profession? Is it legal to go outside to deliver the children to the ex-partner? According to family lawyers, the current situation raises a series of legal questions that do not always have a clear answer. In fact, as some of them claim, it would be convenient for the competent authority (the family councils or the Ministry of Justice, they suggest) to publish some type of guide or protocol that would solve some basic questions that many fathers and mothers are already raising.

Is the visiting regime maintained?

Rosa López, a member of ABA Lawyers, explains that as long as there is no judicial resolution that modifies what is included in the regulatory agreement or sentence that establishes the terms of the separation, “these must be complied with in their strict terms.” Not obsante, beyond legalisms, the lawyer recommends to apply in any case “common sense and the interest of the minor and those around us”. In other words, if there is a situation of risk or exceptional that advises not to apply what is contained in said documents, parents must agree on the best solution. An opinion shared by Delia Rodríguez, managing partner of the Vestalia Asociados law firm. “Except for new events, the agreement is still in force. There is nothing to suggest that what is contained in the agreement or in the judgment is suspended.”

Can parents go outside to deliver the children?

Once the previous premise has been established, the question raised by many parents is whether they can go down to the street to hand the children over to their ex-partner or, if they work, to leave them the relative who will take care of them normally. Delia Rodríguez believes yes. Article 7 (1) e) of the Royal Decree of the state of alarm determines that, among the people who can circulate along the roads for public use, are those who are dedicated to the “assistance and care of the elderly, minors, dependents, people with disabilities or especially vulnerable people. ” In any case, as she herself clarifies, she concludes this conclusion by making an “expansive interpretation” of the precept. “These transfers are necessary to guarantee the care of children and to comply with a current judicial resolution,” he reflects; “In any case, an official statement that reassures families and clarifies this is missing.”

Rosa López, for her part, understands that this situation could fit into article 7.1.d) of the royal decree, when it refers to the “return to the place of habitual residence”. Although, again, the text literal might raise some objection.

It does not matter whether the parents live in different provinces or at a considerable distance, about 40 or 50 kilometers. The transfer, until there is a closure of provincial borders, in principle, should be carried out.

How to justify it to the police?

Here, the legal vacuum is total. In any case, Rodríguez recommends, when you go out into the street to deliver your children to the ex-partner, take a copy of the regulatory agreement or sentence containing the measures, as well as the family book, with you. “It is the best way to demonstrate that you have taken to the streets with a reason protected by the norm. The family book allows to prove that you have minors in your charge,” he explains.

Can a parent refuse to release the children?

Family realities are diverse and not always easy to handle, especially after a situation as conflictive as a separation. For this reason, Mónica Ruiz, also a member of ABA Abogados, advises parents “not to adopt unilateral decisions to suspend the visitation regime or even the shared custody regime.” Minors, he explains, even in a situation as difficult as the state of alarm, “have the right to continue to maintain relationships with both parents and to receive their affection.”

What should one parent do if the other makes the unilateral decision not to release the children? The lawyer recommends going to the procedure set out in article 158 of the Civil Code, which regulates the procedure through which a judge can dictate the measures he deems appropriate to avoid causing harm to a minor. Through this mechanism, “and in the absence of an agreement, the measures to be exercised can be established immediately if the one established in an agreement or judicial resolution could be impossible to comply with. Ruiz.

Delia Rodríguez, for her part, understands that there are cases of force majeure in which common sense and the best interests of children must be applied more than ever. “But this is where the problems come from, because the casuistry is infinite.” And he gives as an example, a parent who does not want to give the other to their common children because they have a risky profession or live with someone who is infected with the coronavirus. In any case, he warns that these are exceptional situations and that whoever makes such a decision “must justify it tomorrow before a judge.”

Is it a crime to violate the visiting regime?

Since 2015 it has not been a crime to violate the visitation regime. However, a unilateral decision in this regard may have civil consequences in the form of a review of the measures against the person who has made that determination “if it is shown that it was adopted in an irrational or unjustified manner,” says Rodríguez.

The lawyers agree that the agreement between parents and common sense is the best solution in these cases, always guided by the best interests of the minor. “Any pact reached during the state of alarm does not bind a posteriori. That is, it does not generate its own acts or condition the resolution of future conflicts, because it is an exceptional period with unusual circumstances that will disappear when this crisis ends”, Mónica Ruiz clarifies.

“Let common sense prevail,” asks Rodríguez, who also recalls that the duties of information and communication of the little ones with the parents with whom they are not physically “absolutely remain the same.” In fact, he insists that it is mandatory to give details about the ex-partner’s health and even facilitate calls “that give children a sense of calm and security.”