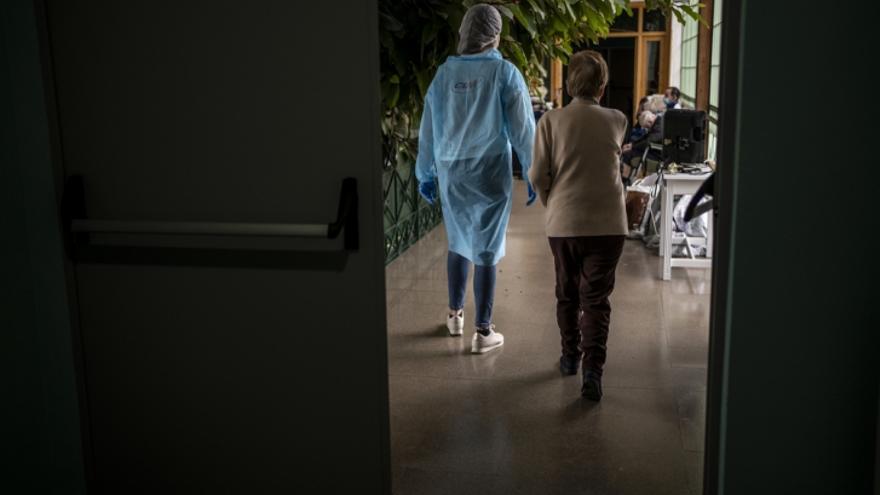 Doctors Without Borders (MSF) presented a report on Tuesday analyzing the situation of nursing homes in Spain after having been providing its health and logistical support in some 500 throughout the country. The organization began to intervene on March 19, that is, when the first wave of COVID-19 began, after having made itself publicly available to the authorities. They began in Catalonia, which was where they had the greatest presence (they supported 200 residences), but they extended to the rest of the State (in Castilla y León they collaborated in 114 centers and in Madrid, in 79), concluding the operation on 31 December. may.

What they detected during that time, which they now expose in a document, are “serious problems both in the residence management model” and in “coordination” between administrations and companies. The report pointed out the “structural deficit of resources and health supervision” of the residences and that there was “no contingency plan” in the residences that “for the most part, did not have health care resources.” The result was “the abandonment of the most vulnerable people, our elders” and “the lack of protection of the personnel who cared for them”, in the words of MSF. The Ministry of Health has not come to give official figures on how many people died in these types of centers last spring. An internal document based on what the communities provided spoke of more than 27,000, due to coronavirus and for other reasonsAlthough the government itself questioned whether the numbers were correct due to the inconsistency of the information presented and of the methodology.

MSF’s report is titled Little, late and bad: the unacceptable helplessness of the elderly in residences during COVID-19 in Spain. Their health teams, they explain, focused during these months on “alleviating the burden” of a staff that they define as “overwhelmed, disoriented, uninformed and devoid of protective materials” in these half a thousand centers. What they did was support to separate patients according to whether they were positive or not; the design of materials, circuits and protocols; training for the protection and control of infections; and training programs. They also carried out dialogue with the administrations, with the Ministry of Health and with the communities. The residences had “a structural deficit of resources and health supervision and no contingency plan. This combination made it impossible to respond to the epidemic,” they insist as the first problem.

Among other serious issues, they also observed in a systemic way the “denial of referrals to hospital services.” “Between the end of March and the beginning of April, hundreds of residents were denied their request to access emergency services and hospital admissions, according to autonomous communities and days of evolution of the epidemic. With no alternative, the residences were forced to stay housed positive patients with a very serious prognosis, “they write. Regarding this, “the reality that the MSF teams observed is that health care was left in the hands of the staff of the residences, who are in no way equipped.” This is described as a possible “negligence” or “omission of the duty to help”. As an example they give what Luisa, a social worker from a residence that MSF teams visited up to four times due to high mortality, relates, although they do not specify in which autonomous community: “You called the referral hospital and they said: ‘I’m sorry, Today we can only admit one person from residences, you choose. ‘Even so, the ambulance did not come to pick them up and they died within a few hours or days. ”

The main objective of the report, according to MSF spokespersons to elDiario.es, is that in a second wave, which is already beginning to reach some residences, the same mistakes are not made. For this reason, they directly point to several measures that are not yet in general operation: contingency plans for early warning; provision of financial, human and material resources; coordination of responses with health and assistance services; increased capacity for infection prevention and control; and training and supply of personnel in the use of PPE, which during this spring “in addition to being late, were insufficient.”

Lack of isolation and quarantine protocols

MSF also denounces that the “lack of anticipation and contingency plans” was aggravated because the response depended “on a multiplicity of interlocutors: departments of Social and Health Services, Provincial Councils, Town Halls, Primary Care services, Public Health services , boards of foundations and management of private centers and religious centers “.

There was also “little room for maneuver to implement isolation, quarantine and distance measures”, identifying “two major difficulties in executing sectorization and isolation measures: inadequate infrastructure and spaces, and high occupancy.” As an example, another testimony of one of the MSF medical officers who worked in centers in Catalonia is included: “There is no type of residence designed in terms of infection prevention. We have not found a residence the same as another. They are all different in With regard to access, the distribution of rooms and common areas, kitchen and laundry services, changing rooms, natural ventilation circuits, access to outdoor areas … In each center, we we have faced a puzzle to advise and implement the most appropriate zoning and circulation measures, and on many occasions we have had to choose the lesser evil to come up with something functional. ”

There were also no protocols for palliative and end-of-life care, or psychosocial care for residents and staff. “Strong isolation measures were implemented for residents, sometimes indiscriminately, and farewells, visits or mobility within the residences were restricted or denied. This had serious physical and psychosocial consequences for the elderly, who, in addition to becoming ill or being see other residents get sick, they did not have emotional support, “abound. Facing a new wave, they warn about the “need to establish a balance between isolation, quarantine and coexistence”: “Those responsible for these centers must ensure that physical isolation does not isolate residents socially and is prioritized at all times their physical and mental health. ”

They advocate because the next time they bet on a “balance between isolation, quarantine and coexistence.” “Family visits and farewells should be allowed in the final moments, always with the appropriate protection measures. For this, it is essential that the residences have sufficient personal protective equipment, so that the elderly do not have such hard times again. away from yours, “they recommend. In addition, “the residences cannot be so saturated especially in the most critical periods, so that a” zoning “can be carried out.