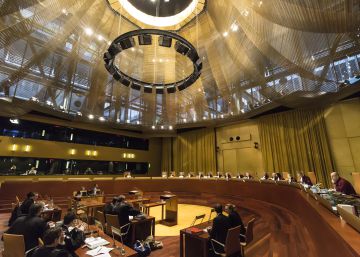 A small throttle stroke at the beginning, a dry braking and a brief stop. Then, possibly, another acceleration, a long wait and, finally, the outcome. This is the roadmap they draw on Stop IRPH – direct emanation of the Stop Clause Floor association – to those who have a mortgage with this benchmarkafter Tuesday the EU Advocate General, Maciej Spuznar, will issue his opinion about this issue, partly favorable to users.

After this previous and non-binding act, the experts anticipate that it will be necessary to wait until the first quarter of next year for the European Court of Justice (CJEU) to issue the sentence in which it will establish whether the clause in which the IRPH is set as Index to determine the variable interest rate of a mortgage is or is not excluded from the application of the Directive on abusive clauses in contracts concluded with consumers. 10% of the mortgages signed in Spain are referenced to the IRPH, an index that, according to the entities affected, increases the fees by about 300 euros per month with respect to the most used, the Euribor.

If the CJEU ruling accepted the conclusions of the General Counsel, some of the contractual clauses for which IRPH is adopted instead of another index could be declared abusive by the Spanish courts. However, it is also possible that Luxembourg rejects them, so, before launching a lawsuit, the Stop IRPH coordinator, Israel Orozco, advises waiting for his pronouncement.

Even so, there is a first step that whoever has signed a real estate credit contract linked to IRPH can take "to save time", in Orozco's words: submit a claim to the bank that granted the loan. "As with the ground clause, you must first try the friendly way," he says. In this document (you can download the model developed by Stop IRPH here)In addition to the user's data, an exposition of the reasons for the claim and the request that the IRPH be replaced by the Euribor will appear. The entity will also be asked to calculate the amount charged so far for having applied the IRPH instead of the Euribor, and that it be returned to the consumer, "as well as the corresponding legal interests."

Similarly to what is established in the Royal Decree of urgent measures for consumer protection in terms of land clauses, the entity will be agreed three months to answer this claim, of which the user will prepare two copies: one will deliver it to the bank and the other will be dated and sealed, which he will keep. "Normally, the entity dismisses the request or does not give any response, which is the same," Orozco explains. The platform coordinator then suggests doing nothing, until the CJEU issues its sentence, predictably before April 2020.

If the judges conform to Spuznar's considerations, clients may file a lawsuit. “It is very likely that this is the case,” says the communication director of the law firm Reclama Por Mí, Javier López, “since the Court usually decides in the same sense as the General Counsel and the principles evoked in this case are the same that were already used in the cause of the ground clauses ”.

For the user it would begin then, however, a long wait. "The collapse in the courts by the ground clauses and the other controversies with the banks make us foresee that, from the moment the lawsuit is filed, the sentence may take about two years, ”Orozco explains. Therefore, López insists on the importance of moving forward and submitting the extrajudicial claim.

The judicial process will begin with a Court of first instance, with possible subsequent appeals to the Provincial Court and, in extreme cases, to the Supreme Court.

So far, in litigation already begun in the absence of the CJEU ruling, the courts have sometimes ruled in favor of users and others against. Therefore, until there is a ruling from the European court, Orozco advises against taking legal action. In any case, it suggests not accepting the proposal that some banks are making to customers who have signed a loan with the IRPH, and that consists of moving to the Euribor, yes, but giving up claiming the difference paid so far.

And, when the time comes to file a lawsuit, he recommends trusting lawyers who, like the lawyers who collaborate with their association, “do not charge a percentage of the bank's refund but only the judicial costs to which the party is sentenced loser, and offer free legal assistance for those who cannot afford it. ”

Lopez stresses that those affected by this clause are around one million, of which hundreds of thousands would be able to file a lawsuit, since the possibility of recovering “about 20,000 euros if the clause was declared abusive, or even more than 100,000 euros if the IRPH itself was declared null and could not be substituted with another index, it is an opportunity that few would let go ”, in his opinion.

His office, one of the many that they took advantage of the wave of lawsuits for the ground clauses and other complaints against the banking entities, does not ask for any compensation to study the case and file the extrajudicial claim. When filing the lawsuit, however, it charges the user 100 euros "to advance part of the expenses involved in the judicial process," López adds, and, if he wins the trial, the judicial costs to which the entity is condemned. As for the percentage of the money returned by the bank, the fees "will depend on the case and whether the sentence is more or less favorable and how the resolutions progress; it is not a fixed criterion," concludes López.