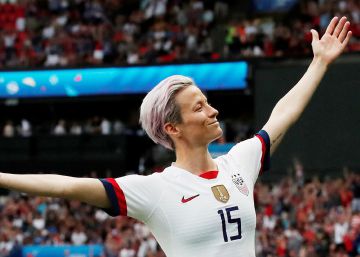 Megan Rapinoe is a Californian, footballer and top scorer of the United States team, who today (21.00, Goal) faces England in the semifinals of the World Cup. For years he stands out for his political and social activism. She is one of the main representatives in the fight for the rights of North American athletes. Rapinoe is among the leaders in the demand of US internationals against her federation, which she accuses of discriminating against the men's team, in a country where the women's team has the best track record on the planet. Due to its possible consequences, the process has the sport on fire. Her name has acquired a gigantic magnitude after the criticisms she has received, via Twitter, of course, from Donald Trump, who has described it as disrespectful to the motherland, the flag and the White House.

Rapinoe had previously stated that he would not go to the White House if the United States won the World Cup. One day before the quarter-final against France, he reiterated his position. Nor did he show signs of intimidation due to the commotion: he scored the two goals of the victory. Megan Rapinoe considers that his visibility as a figure of sport also brings him a social responsibility. Married to Sue Bird, a four-time Olympic champion with the United States basketball team, she is one of the most well-known voices in the defense of the rights of the LGBT community. On numerous occasions, he has stated that the policies of the Trump administration are distinguished by the setback in the field of equality and the fight against racial discrimination. And he will do everything possible to denounce them.

His case has an appreciable pedagogical value, because it refers to the old debate about the position that athletes should occupy in the political arena. Rapinoe maintains that his status as an athlete, and a known athlete, does not limit any of his rights as a citizen and that, as such, he expresses his opinions freely. If his relevant status as a footballer allows him to access a wider universe, it is better to take advantage of it. Trump represents the classic model. On the one hand, in his capacity as president of the United States, he rises as the voice of authority in patriotic matters. On the other hand, it reduces the field of athletes to that of entertainers. "Play and shut up" is your currency.

Trump has the highest executive power in the United States, but that does not make him the arbiter of patriotism or reason. As a politician he has made more than debatable decisions. As a citizen, it usually produces embarrassment. During the electoral campaign a video was broadcast in which he boasted of grabbing the women "for the pussy". He recently rejected an accusation of rape because, among other reasons, he came from a woman who was not his type. For Megan Rapinoe, the president of the United States is a nefarious person who deserves all his rejection.

The classic model that Trump defends is distinguished by its hypocrisy. Those who deplore the sports-political relationship do not usually have the slightest hesitation to fill the boxes of politicians, to celebrate their champions when they wave the national flags, to take advantage of the revenue that means to be photographed with idols and, if necessary, to recruit them. for your partisan interests. They like domesticated athletes, those who graciously accept their status as neutral social examples. They feared, feared and feared the rebels, the Muhamad Ali, Tommie Smith, John Carlos, Colin Kaepernik or Megan Rapinoe, until the story makes its verdict and makes them heroes. Then the supposed detractors of the political-sport relationship forget their prejudices and place themselves at the head of the demonstration.

Change in soccer rules: they tweak the criteria of what will and will not be hand