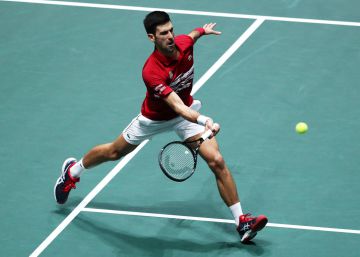 While the tournament staff took off their legañas, because the previous day had forced the last night, Novak Djokovic made his long start at the Magic Box to intervene in the new Davis Cup. Nole had not been in the competition for two years, when he participated in the triumph of his country against Spain in the series played in Belgrade. And his return could not be more comfortable. The Serbian resolved his duel against the Japanese Nishioka with the expected superiority (6-1 and 6-2), and Krajinovic's subsequent victories against Sugita (6-2 and 6-4), and the pair consisting of Tipsarevic and Troicki (7-6 and 7-6 to McLachlan and Uchiyama) established a convincing 3-0 that reflected the candidacy for the title of a selection with very good wicks.

"I am very happy for our victory, both Krajinovic and I played well and that is important," said the current world number two, which did leave a message with a certain aroma of criticism of the new format of the competition. "I think the sacrifice that we have to do many players, and many players have complained, is that now we do not have the opportunity to play at home. And I miss playing for Serbia in Serbia, "Nole acknowledged.

Another of the big claims of the tournament, the British Andy Murray, also uncovered his racket on Wednesday in the bowels of the San Fermin enclosure. Of course, its premiere was much more complicated than I would have thought. The British tennis player had to raise a set against before taking the game that faced the Dutch Griekspoor (6-7, 6-4 and 7-6) in a match that. It was not the only encounter that was forced to play Murray, since the defeat of Evans against Haase (6-3, 6-7 and 4-6) led him to battle alongside Skupski against the Koolhof-Rojer couple. The second point was achieved by the British (2-1), who at the same time certified the elimination of the Netherlands, which fell on the opening day with Kazakhstan (2-1).

He did not do well on Wednesday's day to Argentina, which greatly compromised his presence in the quarterfinals after falling decisively against Germany (3-0). To the initial defeat of Pella against Kohlscreiber (6-1, 3-6 and 4-6), Schwartzman's unexpected fall (3-6 and 6-7) was added with Struff. Not even the doubles gave some air to the albicelestes, who fell into an eternal tie break (20-18) at the end of the third set (7-6, 6-7 and 6-7).