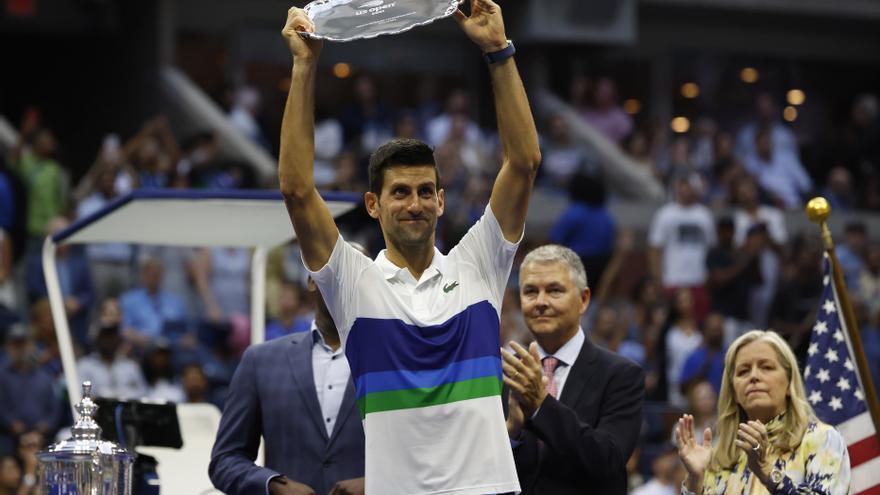 Serbian Novak Djokovic, first favorite, who lost this Sunday the final of the United States Open by 4-6, 4-6 and 4-6 against Russian Daniil Medvedev, second seeded, recognized that defeat was going to be very difficult to assimilate for all that was at stake, to become the third player to complete the Grand Slam cycle.

“It is very hard to assume, with very mixed emotions for everything that was at stake, but at the same time at the end of the day you are a professional and you understand that you can win games and lose them,” said Djokovic at a press conference after concluding the match. “Despite the defeat, I will never forget the way the fans supported me. so that I could achieve victory and they were the ones who kept up the fight and touched my heart. ”

Djokovic, what was looking to join the legendaries, the American Don Budge and the Australian Rod Laver, twice, the last in 1969, who got the full Grand Slam cycleHe said that he reached the final with all the elements to win, but in the end on the track the best was Medvedev.

“He deserved the victory, he played great tennis, he did everything well on the court and he is a great champion,” Djokovic admitted. “He came out with a great winning mentality that he showed in every point we played, with a perfect strategy and execution, while my legs didn’t give to answer him, even if I tried and gave my best.”

He further acknowledged that his serve was not good either and against a rival like Medvedev, who remains safe and powerful from the back of the track, he left him without options.

“I think it was one of those games in which the rival has everything in his favor, both with his game and mentally, as he showed in the third set, when he started it overwhelming with points that he won very easily, because my serve it was not good, “Djokovic said. “Although I had already gone through two sets down, as in the final in Paris, against Stefanos Tsitsipas, this time my feelings on the track were not the sameI didn’t even have a chance to turn the game around. ”

But Djokovic insisted that all the credit goes to Medvedev to whom he congratulated for the winning mentality that he presented, how he approached the game and without making any kind of concessions.

“Without a doubt he was the best player on the court in all aspects”, underlined the world number one. “It is true that I did not have my best performance, but I repeat, at the end of the day it is a sport in which sometimes you win and other times you lose, this one touched me the defeat, which is undoubtedly very hard, and Medvedev made it brilliant.”

As for how the defeat could affect him going forward, he said he did not expect it to have any repercussions.

“I will continue to fight to get more Grand Slam, represent my country and see how the new generation is increasingly integrated into the sport of tennis,” said Djokovic. “What is clear is that world tennis is in good hands with the arrival of new talentsAlthough we are still veterans we can offer an orderly transition because I think we can still offer good things on and off the track. ”

Djokovic said that everyone’s ultimate goal is for the sport of tennis to attract more fans across the world and thought they were on the right track.

“Sport is alive more than ever, with clear opportunities for young values ​​to develop, while at the high level there is no problem, but he considered that we must do more collectively to overcome aspects that must be improved,” said Djokovic.

The world’s number one winner this year at the Australian Open, Roland Garros and Wimbledon, acknowledged that it had been a very demanding season for six months in which he also had to face the Tokyo 2020 Olympic competition, in addition to playing with his country’s Davis Cup team.

“All things could come together in this match, but having won three Grand Slam is very important and of which I am very proud, even if in the end I could not get the Grand Slam title, “said Djokovic.” My team also did a great job.

He also recalled that in tennis you must quickly turn the page if you want to advance and more after having given everything during the last two weeks both physically and emotionally, although the end had not been the desired one.

“New things will come, challenges, and above all learning from defeats like the one I suffered this Sunday,” said Djokovic. “The message to get out is that I must learn and return to the competition stronger than ever, stay in the fight, motivated, feel love for the sport, enjoy on the track and relieved that the fight for a great goal has already come to an end “. understand that staying motivated”.