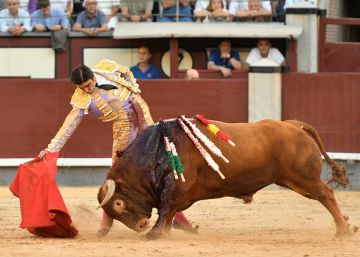 He was in the ring on the fifth of the afternoon, a dumbfounded specimen with the iron of Núñez del Cuvillo, while part of the lines shouted and protested requesting the return of the animal. The reason? His - seemingly - very little force. Arms raised, green handkerchiefs in the air and the feeling that, both the bull and the hypothetical trasteo to perform by his matador, were doomed to oblivion.

Missing the hard singing so that Portuguese, which was the name of the horn, returned back to the pens, but the president decided to keep him in the ring. He passed the third of flags, and Miguel Ángel Perera took the crutch and the simulated rapier and went to the center of the ring to quote the bull with his right hand. And there was that of Cuvillo, with an unexpected gallop.

Everyone thought that mobility was nothing more than a mirage, but no. As a good modern bull, Portuguese He pulled out and held on. Nobilísimo, of great fixedness, class, humiliation and travel, was the animal dreamed for the bullfighter.

For the bullfighter and the current public, ignorant of what a brave bull is or should be. Because yes, of course Portuguese it rammed with superior quality, but what about the caste? and the demand? and the fierceness? His behavior, cloyingly obedient, was more like a pet than a bull.

Miguel Angel Perera: back thrust, fall and pierced (silence); prick, lunge slightly back and crossed _aviso_ and a hairlessness (silence); prick and metisaca in the soft ones (back to the ring).

Las Ventas bullring. Sunday, September 29. 3rd of the Autumn Fair. Full apparent (23,624 spectators and full of "no tickets", according to the company).

So, Perera, who had been silenced in his first two shifts, found himself with the ideal opportunity to change the fate of his afternoon. And he achieve it. Had he killed the first one, he would have cut both ears, marching on his shoulders through the big door. However, after a lesson in modern cleansing, his hand went out and he clicked on the soft ones. Divine justice.

The Extremaduran, who took advantage of the fixity and mobility of his "opponent", gave him distance and cited from afar, something unusual in his particular bullfighting commuter. And he tempered, and commanded, and linked, and lowered his hand, yes, but almost always online and unloading luck. I do not care; the public, triumphant, quickly became inflamed, even getting to his feet. Oh, Madrid.

Well Perera walked all afternoon with the cape, both veronica, as in a quite for personal gaoneras or in a beautiful Galician for chicuelinas. And really good were two juniors of his gang. Javier Ambel, with the flags, and José Chacón, in the brief, shone in the second third of the third of the afternoon, which took the currency of Victoriano del Río and looked like a lapdog because of his unbearable nobility, laziness and soberness.

Neat was with Perera in a task as long as lack of emotion. The same as before the first, by Juan Pedro Domecq, of similar similarity.

In the chiqueros, as the first envelope I waited Morning, an imposing cinqueño belonging to the cattle ranch of José Vázquez. And, things of destiny, although he did not do it in fifth place, he finally jumped into the ring. He did so to replace the invalid Victoriano sixth, which corresponded to Paco Ureña.

With a strong ovation the winner of San Isidro was received, who returned to Las Ventas three and a half months after opening the big door. On foot, this time Ureña left, who cut off a second ear, a Cuvillo bull just about everything. His work, very measured and topped with a big lunge, had details of great taste, bullfighting and purity.

As the beginning. Three passes to those who followed another few by low pregnant with art. One of the contempt was monumental. In front, embedded, he fought with temperance and left a change of hand to idle that made the square creak. Then, before going for the sword, standing together, very crossed and looking at the laying, an embroidered chest pass.

And the Murcia could do little more, that after showing his most apathetic and mechanical version in front of Juan Pedro's very quiet room, he had no choice but to chase down José Vázquez's cracked envelope, which also defended himself by throwing defeats with his face loose. Destiny and (bad) fortune.