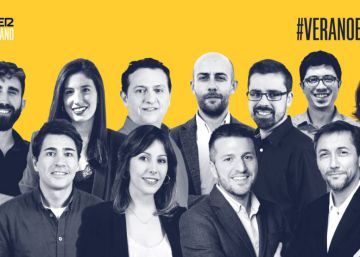 The SER chain has already prepared its programming for the summer. From July 15, the station will transform some of its most classic spaces or change its presenters during the holiday season and will have several news and returns. In total, 27 spaces will entertain listeners during July and August with a program that aims to be "more diverse and innovative" than ever, according to the chain itself.

SER's reference programs are maintained throughout the summer, but with other names in front. Since July 2, journalist Aimar Bretos has been in charge of the first section of the morning Day by day (So ​​far presented by Pepa Bueno and that from the next season will be directed by Àngels Barceló, which in turn leaves Bueno Hour 25). The second section will feature Javier Ruiz from next day 15, replacing Toni Garrido. Ruiz returned to the SER last May as head of Economy after the closing of the news programs in Cuatro, where he presented the desktop edition.

News Hour 14 Y Hour 25 will be presented in summer by Antonio Martín and Pablo Morán, respectively. On weekends it's time for To live that is two days, with Lourdes Lancho at the front and Carousel, with the exfutbolista Álvaro Benito at the controls. And in the early hours, Mara Torres will leave the witness to Adriana Mourelos in The lighthouse, Yago de Vega will be in The spar and Julia Molina will accompany Aitor Albizua in First of all.

Women with boots on, with Ángeles Caso, will remember the great traveling women of the past and connect them with those of the present as Mary Kingsley, Lady Hester Stanhope, Isabel Barreto, Sara la Goda, Catherine de Eraus, Alexandra David-Néel and Amelia Earhart. The world of television will continue to be disembowelled Mariola Cubells on Saturdays in And you, what are you looking at?. Cubells will invite creators, artists and technicians in each program to analyze everything that surrounds the series and television programs.

Nieves Concostrina offers again this summer in Any time past was previous, his look on history. The history en route, directed and presented by David Botello and Esther Sánchez, will visit the most important places and the history of European cultural itineraries in Spain. By the hand of Antonio Martínez Asensio comes this summer season One book, one hour, which will review the great classics of literature with the reading of some of its essential extracts. With Sonia Ballesteros, in Radio Paradiso, the listeners will make a trip in the summers of the last decades. For her part, Marta Nebot will open necessary debates in a hooligan format and with much laughter in Treading puddles. It happened one night collection It is a special summer session that proposes an overview around the great classics of cinema, recovering the best reports broadcast from the program The cinema in SER.

The SER also offers a wide range of programs where music is the protagonist. Sound Sofa, with Alfonso Cardenal, will travel throughout the summer the history behind some of the most important bands and artists of twentieth century music. The lighthouse of a summer night, directed by Iñaki de la Torre, will tell how music, of any era and style, reflects many of the themes that the program has shared with listeners. Mariela Rubio and Rafa Bernardo open the opera also in summer with Play opera and Rafa Fuentes returns one more year with a classic on the summer grill of SER: Jazztamos here.

Humor is another of the strong bets in summer at the station. In All over the radio, Roberto Sánchez, together with the humorist Pilar de Francisco, will try to give a different meaning to the pieces with which each afternoon the puzzle of All for the Radio. In The modern language, Quequé wants to test its audience as it deals with the generational differences that separate it from its millennial partner, Valeria Ros. Every week, in the summer edition of The nights of Ortega, Marco Antonio Aguirre will interview an "outstanding human being of our country." Nobody knows anything, with Buenafuente and Berto, does not close for vacations. As of July 15, on Fridays after The spar, the SER assures laughter to the listeners with three uninterrupted hours of humor with The nights of Ortega, Nobody knows anything, Comedy perpetua (with Antonio Castelo), All over the radio Y Yes yes or no (Jorge Ponce, and Bob Pop).

Secondary roads, with reporters Bru Rovira and Valentina Rojo, will give prominence to the less listened voices of the Spanish social reality. In the beginning, Toña Medina and Ángeles Oliva will make a sound radiography of the childhood of relevant characters. Conchi Cejudo will bring a new installment of Buried lives, which recovers the life and death of people killed during the Civil War and the Franco regime. The Podium Collection offers two non-fiction documentaries this summer: Olafo Y White noise. With Black and criminal the date with the fear of the hand of Mona Leon Siminiani returns, in which the listeners will be able to listen to the fifth season of this podcast.