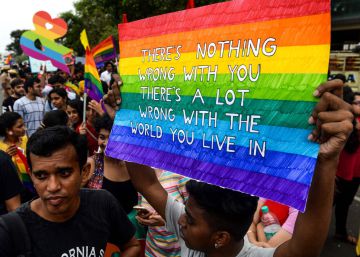 A few days ago, commemorating the LGTBIQA + pride day and the 50 years of the Stonewall altercations that marked the beginning of these celebrations, three important British institutions, the Institute of Physics, the Royal Astronomical Society and the Royal Society of Chemistry presented a joint report (Exploring the workplace for LGBT + physical scientists), where people were interviewed in the basic sciences about their situation and what it implied in the performance of their profession.

The report reveals that 28% of LGTBIQA + people in the world of physical sciences in the United Kingdom have considered at some point in their scientific careers to leave their work because of the discriminatory environment they experienced because of their affective or sexual condition. The percentage increases to 50% in the case of trans people.

The fact that almost everyone has felt hostility makes us indignant and must move to action, as I commented in a seminar on diverse and inclusive science organized by the Society of Spanish Scientists in the United Kingdom (CERU / SRUK) on June 6. astrophysicist and disseminator Alfredo Carpineti, founder of the association Pride in STEM and promoter since 2018 of the celebration, on July 5, of the LGTBIQA + pride day in the disciplines of science, technology, mathematics and ingerniería: #LGBTSTEMDay.

However, if we ask in any research center, laboratory, technology company or university if there is any discrimination against the affective-sexual diversity, everyone would say no, that the opposite is true, that being a lesbian, homosexual, bisexual, transsexual or Non-conforming or creative gender has nothing to do with performance in scientific or technological work, nor for these reasons is excluded or minorized any person.

What happens then? For those of us who live our non-heterosexual reality, however, the reality is obvious: discrimination exists and many choose to adopt a normality that does not seem conflictive. If you are lucky, this will facilitate a more or less relaxed career in the world of science. Whenever, of course, do not touch, for your work, have to move to countries in which LGTBIQA + people are discriminated, where you have to consider going back to the closet, forgetting your partner or becoming that stereotyped scientist, with a point 'geek' but without 'mariconás', which looks good in any place by lgtbiófobo whatsoever.

Various studies, such as Queer in STEM initiated in 2013, which conducted surveys of scientific personnel from various areas asking them about their personal situation and their perception in the research or work center, show that the most egalitarian scientific areas in gender are usually more inclusive also in other aspects such as diversity sexual. More masculinised areas, on the other hand, are less inclusive.

The report of the American Physics Society of the United States LGBT Environment in Physics, published in 2016, showed how social norms in the US actually establish discrimination. More than 40% of the people surveyed agreed with the following statement: "Employees are expected not to act too gay." The aforementioned British report updates the data in a European context. There are still no analogous studies in Spain, but we can make a reasonable adaptation. Even more negative, because the LGTBIQA + reality in Spanish science is almost completely invisible.

In the 2016 American Physics Society report, more than 40% agreed with the following: "Employees are not expected to act too gay"

In Spain, in a personal analysis that I did in 2018, in consultation with the 75 scientific societies that make up the Confederation of Scientific Societies of Spain (COSCE), I can see that none of them has constituted a study group, nor undertaken specific actions, referring to the collective LGTBIQA +. There is no research that analyzes whether the associated people live in situations of inequality, nor has there been an inclusive campaign in these years.

In other countries, however, it is clear that all scientific societies have been working on these issues for years. In the United States and the United Kingdom, specific actions are organized: Pride months, meetings of scientists and scientists LGTBIQA +, and preparation of documents such as LGBT + Inclusivity Guide in Physics and Astronomy elaborated in 2018 by the American Astronomical Society.

However, the situation has changed this spring, when we formed an association that, like others existing throughout the world, bears the hallmark of diversity: PRISM, Association for the Affective-Sexual and Gender Diversity in Science, Technology and Innovation. Presented on Friday June 28 in Barcelona and on July 4 in MadridPRISMA not only wants to increase the visibility of LGTBIQA + people in scientific fields, but also to contribute new models of science that make it more inclusive, with broad perspectives and with a clear vocation of activism for science and against pseudosciences.

We find alarming recent news about the support of various instances to conversion therapies, a practice denounced by all the scientific authorities as an unscientific and dangerous activity, with consequences sometimes devastating for the families involved; or phenomena such as the transbobic bus of fundamentalist associations, which invoked science to confuse messages about sex and gender, especially sensitive in one sector, that of transsexuality, which has been pathologized until a little over a year ago by WHO .

In a few years in which science has understood that achieving a more egalitarian society is also their struggle (ours), PRISMA poses a more diverse science and encourages proposing references, something that remains fundamental, as I commented a few days ago in an interview at SINC the math Marina Logares. In the manifesto that marks the official presentation of PRISMA, this need is specified, as well as that of initiating and promoting research that allows the creation of more inclusive and diverse study and work spaces.

When the environment is inclusive and diverse, a higher quality science is produced. This was shown in a joint publication of the journals Nature Y Scientific American in September 2014 in the case of ethnic diversity, and it has been proven in other areas: the impact of science that plants wide and diverse networks is measured in various investigations. And in a way, although the science was equally good or bad, the trip would have been worthwhile too.

It is something that we now begin to understand as something evident in the case of men and women in science. Going a little further to accept affective diversities seems a logical step.

Javier Armentia He is an astrophysicist and disseminator of science, a member of the PRISMA association. Since 1993 he is director of the Planetarium of Pamplona.