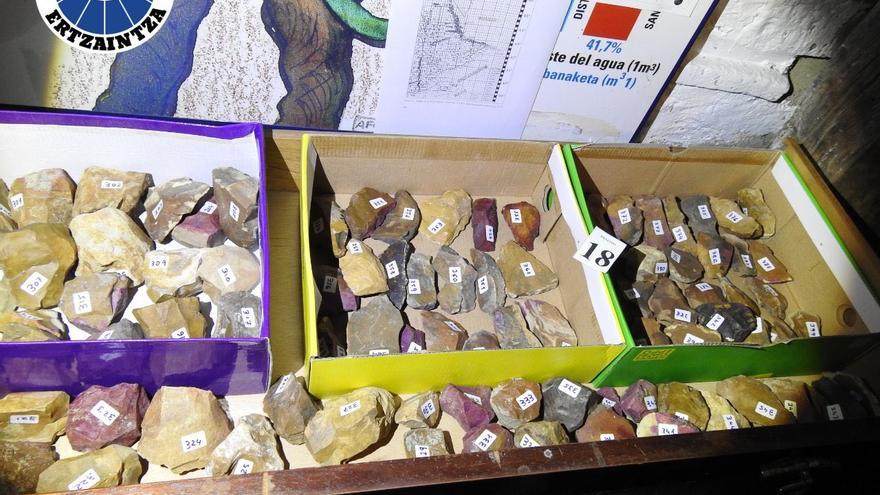 The Ertzaintza, within the framework of an operation against the archaeological looting of the Basque Cultural Heritage, has recovered more than 20,000 pieces obtained illegally and has proceeded to bring to justice one detainee and three investigated, accused of being part of a criminal group dedicated to the continued looting of caves and deposits in Álava, mainly, but also in other neighboring provinces such as Navarra or Cantabria.

All the intervened material, multiple elements and tools of flint, bone remains, ceramic and metal fragments, have been transferred to the Archaeological Museum of Araba for cataloging and study, as reported by the Basque Department of Security and collected by Europa Press.

The operation, the first of these characteristics carried out by the Ertzaintza and one of the most important at the State level, has been led and coordinated by specialized agents of the Central Section of the Autonomous Police, with the participation of agents of the Territorial Investigation Service. de Araba (SICTA), Citizen Protection of the Vitoria police station and the Navarra Provincial Police, also counting on the technical support of archaeologists from the Museums and Archeology Service of the Araba Provincial Council.

The investigation has been directed by the Court of Instruction number 4 of Vitoria-Gasteiz, which decreed the secrecy of summary of the proceedings.

The case was opened last June, after a meeting at the Asparrena Town Hall, which was attended by representatives of the town councils of the Llanada Alavesa, the Provincial Council of Álava, archaeologists working in the area and agents of the Ertzaintza.

At that meeting, the "serious problem" of damage and removal of historical remains that was being detected in various Alava deposits, especially in the Asparrena and Agurain demarcations, was discussed. After that meeting, the Provincial Council filed several complaints for archaeological plunder.

Due to the complexity and seriousness of the events, the complaints were made by agents specialized in the investigation of crimes against Cultural Heritage belonging to the Central Section of the Ertzaintza, specifically the Environment and Urban Planning Section and the Heritage Section .

The police section came to suspect that the alleged perpetrators of the crime were members of a criminal group whose purpose was the continued looting of caves, human settlements and sites already declared protected by the Basque Government or the location of unpublished sites.

Regarding their 'modus operandi', the members of the group previously documented themselves to select their objectives and then they traveled to those caves and sites to illegally seize all the archaeological remains they found.

To do this, they carried out clandestine tastings without scientific methodology, causing irreversible damage in archaeological contexts and collected all the remains that they could locate in their speleological incursions through the interior of caves.

The investigations also revealed that these people had been carrying out these illegal behaviors, at least, since 2010, and that their components published some videos of their incursions on the Internet. The investigators were able to determine that the detained person was the main depository of the looted objects, accumulating an important private collection at his home in Agurain. In addition, this person would have offered his collection in exchange for financial compensation, which would reveal a profit motive.

Faced with this situation, the Central Section of the Ertzaintza planned the "Ondare" operation, proceeding to arrest a man last Thursday, the 10th, in Agurain and to investigate three other men, accused of the same crime, two in the same crime. Alava town and the third in the Navarrese municipality of Ziordia.

In addition, in compliance with the order of entry and home search issued by the Investigating Court, the agents also proceeded to search the detainee's home in Agurain, where they located a kind of private "museum" with display cabinets and exhibitors containing more than 20,000 pieces, including prehistoric flint tools, human and animal skeletal remains, ceramic fragments and various metallic objects such as nails or horseshoes.

To get an idea of ​​the importance of the operation, according to sources consulted at the University of the Basque Country, due to their high volume, the occupied flint elements could constitute the most important prehistoric lithic collection of all those known in Álava to date. In the registry, maps and notebooks were also occupied with annotations of the allegedly looted places, speleology equipment, computer material, etc.

All the members of the criminal group were brought to justice and the pieces were transferred to the Archeology Museum of Araba, where technicians from the DFA Museum and Archeology Service will proceed to catalog and study them for the preparation of the corresponding expert report.

From the Ertzaintza it has been recalled that the Basque Cultural Heritage Law prohibits any archaeological intervention without authorization from the Provincial Council, as well as the use of metal detectors in sites, for which it is requested that, upon the slightest suspicion, the 112 any of these situations.

He has also highlighted that in the event of the accidental discovery of archaeological remains by an individual, they should not be collected, but must be immediately informed to the town hall or the Provincial Council, so that the remains can be collected properly.