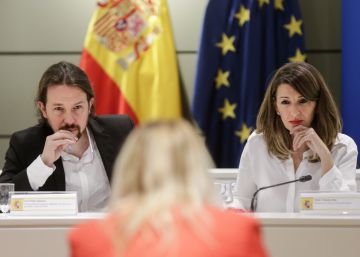 The agricultural sector is on a war footing and the situation is still not channeled. Nor does it seem that he will do it, at least in the short term. In fact, this Friday the Ministry of Labor, led by Yolanda Díaz, called the agricultural organizations (Asaja, COAG and UPA) to a meeting with the unions in the sector. An appointment also attended by Vice President Pablo Iglesias. But this Thursday afternoon, with all its representatives displaced in the capital, there was a turnaround and they canceled that invitation to the three organizations. “We are perplexed. We expect some explanation from the ministry and that the table be convened with everyone,” explained Miguel Blanco, general secretary of COAG.

The forms in the call did not sit well with the agrarian organizations, since it was done, according to negotiating sources, speaking directly with members of the organizations of Extremadura and Andalusia. “We do not understand how a call can be made in this way. If what they intended was to treat the general situation of the sector and analyze our general problems, we have to call the organizations at the national level, “Lorenzo Ramos, general secretary of UPA has defended. Labor sources say that the meeting has never been officially confirmed, although leaders of COAG, UPA and Asaja explain that they had agreed to the Appointment with the department.

The discomfort generated in the agrarian organizations is also caused by the lack of explanations for their final call to the appointment. “We were not given any reason for our recall. It seems they are improvising [el Ministerio de Trabajo y la vicepresidencia social]. We are very upset because I don’t think we deserve this deal and we don’t know why this has happened, “Blanco explained. The meeting they were invited to continued continued, but only with the agrarian unions.

Likewise, as sources of agricultural organizations explain, there are already other dialogue tables to deal with issues such as PER (rural employment plan), in which all parties are present: “It is a legally constituted table, but it is being bridged with this other meeting in which there are also not all parties, “Blanco insisted.

To try to redirect the situation, from Work they are already processing a new call for next week at the request of the agrarian organizations. In principle, sources familiar with the negotiation point out, it is being considered next Tuesday afternoon, although there is still no official date.

The meeting, therefore, went ahead with Labor and the social vice presidency with the agrarian unions. The job holder is especially responsible for impact in the field of the rise in the minimum wage (SMI) although there is also a possible reduction in the number of steps needed to access the aid of the PER. Díaz said Thursday that the appointment was to hear “what are the needs” of the sector, know “how to help the most affected in the field in situations that are difficult” and collect “measures that can be assessed,” he reports Servimedia

This disagreement in the meeting with the agricultural unions has ended up affecting the usual meeting of the social dialogue that the social agents maintain to address the repeal of the labor reform, reports Manuel V. Gomez. That meeting, held every Friday, was held at the same time as the other date. This, sources of this negotiation indicate, has caused the Secretary of State for Employment, Joaquín Pérez Rey, has risen to be present at the meeting with the agricultural unions. Another of the representatives at the ministry table would have also left.

Finally, this has led to the suspension of the social dialogue meeting. Union sources have confirmed that the absence of the secretary of state has been the trigger for such suspension. In addition, the employers CEOE and Cepyme had already come to the meeting with a strong discomfort for the exclusion of Asaja – associated with both confederations – of the agrarian event. However, several sources of the social agents point out that the negotiations will continue next Friday at the same point that has stopped this week.