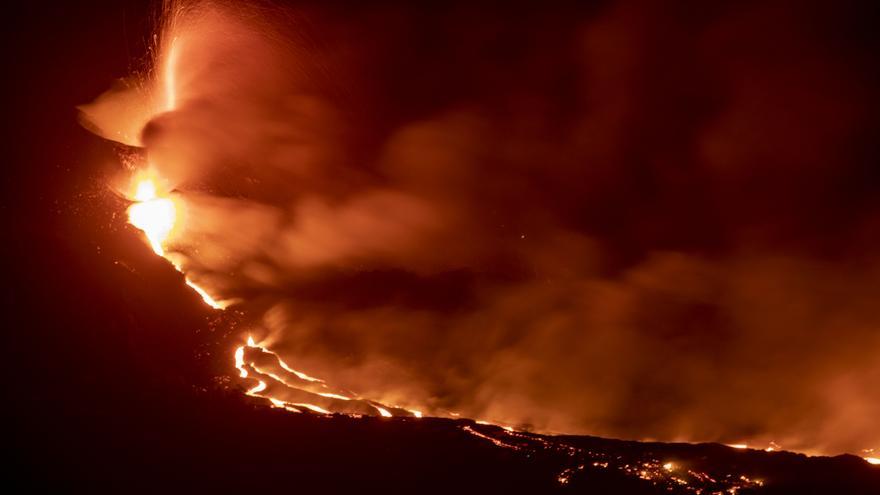 The number of buildings destroyed by the lava of the new La Palma volcano since the beginning of its eruption on September 19 rises to 946, in addition to another 128 possibly affected, according to the latest update of the European Copernicus terrestrial monitoring satellite system.

This means that in 24 hours constructions have increased by 66, mostly houses, but also implement rooms, warehouses and other facilities, destroyed by the advance of the wash.

Too the area covered by lava continues to increase, which according to updated data at dawn this Sunday are 397.5 hectares, as well as the extent of the ashes, up to 4,819 hectares.

The number of kilometers of roads affected amounts to 33.2, of which 30.7 have been destroyed by the passage of lava.

The casting magmatic material that emerged this Friday from the two new lava-emitting centers that opened about 600 meters from the main cone of the volcano of Cumbre Vieja, on La Palma, has made contact with the first of the lava flows that formed this volcanic eruption.

Carmen López, head of Volcanic Surveillance of the National Geographic Institute, and Miguel Ángel Morcuende, technical director of the Canary Islands Volcanic Risk Prevention Plan, Pevolca, explained the evolution of the volcanic eruption, which has already affected 1,005 buildings, of which 885 have been destroyed and 105 are damaged or at risk of being destroyed.

Morcuende has pointed out that the eruption has left 28.3 kilometers of road unusable and 201 people, of the more than 5,500 evacuated, are housed in a hotel in Fuencaliente while the rest have done so in the homes of friends or relatives.

Regarding the progress of the new casting, Carmen López has said that it has gone in parallel to that of the original casting with which she has already made lateral contact although it is not known with precision if it will continue the same route.

This primal laundry is not the one that has reached the sea and the one that has, maintains a constant flow, he explained. He has pointed out that in There are several active centers in the main cone and two in the northwest of it, and it is not ruled out that new sources of volcanic material will be produced.

Every day we continue to sample every day the front of the lava flows to obtain information about the eruption #La Palma #EruptionLaPalma #LaPalmaeruption pic.twitter.com/O5w0kkclp2

López added that the fissure eruption continues to show strombolian mechanism, with simultaneous explosive and effusive phases. He explained that the strip created by the lava that has reached the sea is at a distance greater than 475 meters from the coastline, reaching a depth of 30 meters while the surface covered by the lava delta is 27.7 hectares.

López has pointed out that the marine plume, composed of water vapor and hydrochloric acid, constituted by the thermal contrast between the lava and the sea, only has an impact on the contact area, although he has warned that the Nearby towns should be informed about changes in the wind.

He has also indicated that the extensive fumarolic field on the north-northwest flank remains active, has indicated that it cannot be ruled out that a new emitting center has been produced inside the cone and has specified that an eruptive process can show episodes of increase and decrease in strombolian activity, as well as pulses with phreatomagmatic activity.

Regarding the ash cloud and sulfur dioxide, the IGN technique has indicated that, according to the wind, it is It can move towards the south of the island, so the most affected area would be the south-southwest part with the possibility of the arrival of fine ash to El Hierro.

The meteorological conditions are unfavorable for air quality, said the expert, who specified that the measurements made show an improvement in the values ​​in Tazacorte, Los Llanos de Aridane and El Paso.

However, he has pointed out that the process of saharan dust intrusion that is registered in the islands these last days complicates the situation because it mixes with the particles coming from the eruption.

The technical director of Pevolca has indicated that the entire population has been misled that it was and before any change that takes place a communication will be made by public address in these nuclei.

He explained that the meteorological conditions that occurred last night and that led to a worsening air quality They can be repeated again, so it has asked the population to be attentive to the information that reaches them through official channels.

The president of the Government, Pedro Sanchez, He will travel to La Palma this Sunday, October 3, to monitor the effects caused by the volcano’s eruption, as reported by La Moncloa.

After meeting at 11 a.m. (local time) with the Steering Committee of the Canary Islands Volcanic Emergency Plan (PEVOLCA), Sánchez will appear around 12.00 before the media in the Salazar Palace.

Subsequently, the President of the Government will go to the hotel where some of the displaced are staying.

The President of the Executive already met with the PEVOLCA Steering Committee on September 19 in La Palma. Sánchez visited the island after postponing his trip to New York, to speak at the 76th session of the United Nations General Assembly.

The Ministry of Ecological Transition, Fight against Climate Change and Territorial Planning of the Government of the Canary Islands, through the General Water Directorate, and in collaboration with the Insular Water Council of La Palma and the Ministry for Ecological Transition, work together on an emergency solution to ensure maintenance irrigation of the banana plantations affected as a result of the losses caused in the distribution and irrigation network by the volcanic eruption on the island of La Palma.

To do this, they will install two portable desalination plants in the Puerto Naos area. The start-up of these plants will take into account the different factors that condition this type of operation, such as, in this case, the transfer to Puerto Naos, the water quality at the intake point, and the subsequent transfer to the network. irrigation.

According to the forecasts of the General Water Directorate of the Canarian Government, this operation may be up and running in the coming weeks, once the portable desalination plants reach Puerto Naos. The estimate of the Canarian Executive is that the facilities make their arrival on the island of La Palma this Tuesday.

“It is mandatory at this point to acknowledge and thank the involvement and commitment of all those companies and institutions involved to provide a prompt solution to the inconveniences found “, assured José Antonio Valbuena, counselor of the area.

For its part, the Ministry for Ecological Transition confirms the transfer of a tanker from the peninsula that will make it possible to substantially increase the flow of water for irrigation. This action has been coordinated by the Ministry after an emergency meeting held by the different institutions involved with the Secretary of State for the Environment last Thursday.

At this point, the general director of Waters of the Government of the Canary Islands, Víctor Navarro, highlighted the coordination and effort made by both the State and the Cabildo de La Palma and its Insular Water Council to find a solution in the shortest possible time.

“We are fully aware of the drama that La Palma tree society is suffering and that is why we want to transmit a message of hope and understanding with the measures that will be carried out to try to alleviate this situation, “added Navarro.

These are two of the first emergency measures that will be implemented and that will be complemented with new actions that will take place in the coming days. Among them, the transfer of irrigation water and supply from other areas of the island up to the affected areas, as well as the closure of the insular ring.

Earthquakes on the island

Seismicity continues to be located, mainly, in the same areas as in previous days, which correspond to the area where the seismicity of this volcanic crisis began to be located. depths between 10 and 15 km. In addition, earthquakes are recorded at depths greater than 20 km. In the last 24 hours, dozens of earthquakes have been located, the largest of them of magnitude 3.6, which has been felt with intensity III-IV. There may be more earthquakes felt by the population that can cause small landslides in sloping areas. In some seismic stations it is even possible to record the tremor associated with the lava delta.

The deformations show at stations far from the eruptive center a slight downward trend in the vertical component and in the surrounding stations, stability, and also some pulses related to the eruptive dynamics of this volcano.

The SO2 emissions associated with the volcanic plume continue to register relatively high values ​​and in line with the process, reaching values ​​of 2,330 tons per day. The diffuse emission of carbon dioxide associated withs 220 km2 of the Cumbre Vieja volcanic ridgeOutside the volcano, it has reached values ​​of 1,870 tons per day. During yesterday the SO2 values ​​at the Tazacorte, Los Llanos and El Paso stations were gradually reduced, to the current values ​​that are below 20 micrograms / m3. In the rest of the island’s stations, the values ​​continue to be low.

Regarding particles smaller than 10 microns, we are measuring high values ​​in all of the island’s stations, yesterday that the daily threshold was exceeded at the stations of The plains; Las Balsas, in Los Sauces, El Pilar and La Grama, in Santa Cruz de La PalmaThe Los Llanos station being the one with the highest daily average. At this time there is an intrusion of Saharan dust that adds to the values ​​of the particles of the eruption.