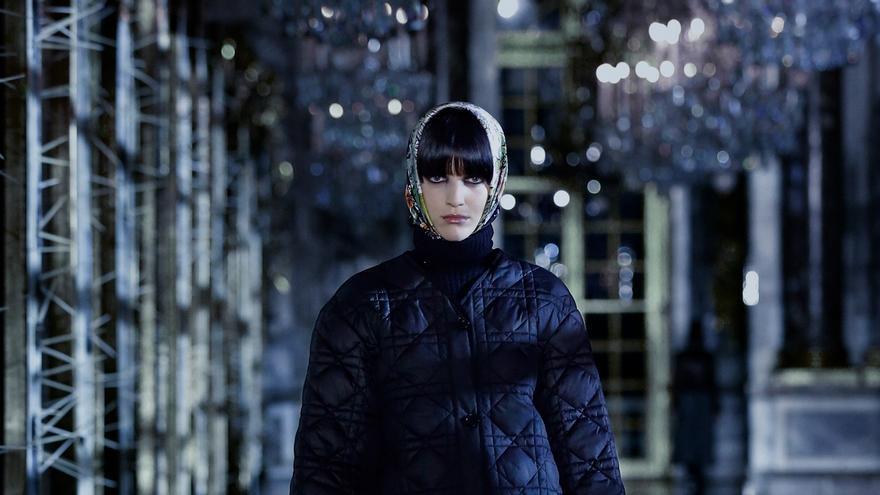 Paris, Mar 8 (EFE) .- Dior turned the Palace of Versailles on Monday into the scene of its autumn-winter 2021/2022 collection, transforming its famous hall of mirrors into a catwalk in which it reinvented the military uniform and showed the darker side of fairy tale dresses.

“These fantastic worlds are in no way a method of evasion, but rather serve to question, reject and go beyond stereotypes,” the firm said in a statement.

Its designer, the Italian Maria Grazia Chiuri, consciously chose this Monday, March 8, International Women’s Day, to celebrate her parade, and launch from it a new feminist claim.

On this occasion there were no placards or vindictive slogans by Chiuri, who said she was inspired by “the dark background and complex female characters of the first fairy tales”, combining the delicacy of English lace with tight silhouettes at the waist and military boots. , in a mixture of sweetness and rebellion.

Chiuri also took as a starting point the version of the story “Little Red Riding Hood” created by the British writer Angela Carter, “a feminine magic, reinvented, a subtle path towards a new consciousness”.

Thus, Dior’s Little Red Riding Hood does not hide behind a hood, but wears a pleated dress to the feet with a train and a heart-shaped neckline, and runs through the dark palace gardens without being afraid of the forest or the night.

The pleated dresses, a design revisited by Chiuri in each collection in that line of princess dresses that have conquered the red carpets, also appeared in pale pink and emerald green.

It was the most colorful note of a parade marked by black and lead gray, which combined with white cotton blouses served to renew the military uniform in a female version.

A mini dungaree with blouse and military boots, a straight and embroidered shirt with a triangular midi skirt, or a tailored suit with a miniskirt and hood to renew the office look.

In her quest to create a basic wardrobe, Chiuri has taken up work overalls in recent years, which she has managed to turn into a trend, and military aesthetics, with a bohemian and seventies touch but without neglecting the femininity of Dior from the 50s.

Thus, a set of masculine trousers and white shirt is worn with a shearling jacket, leather pilot hat and briefcase, while the classic “Bar” jacket, created by Dior in 1947, is combined with a pleated miniskirt or in a more mature version, with a voluminous skirt to the feet.

The Italian introduced several outfits that seemed to be inspired by the wardrobe of Elizabeth II of England, with the padded jackets, the mid-calf skirts and the headscarves that the monarch wore on her visits to the field, as has recently been recalled in the series “The Crown”.

The video created for the presentation reinforced the aura of mystery that distilled a collection baptized as “Disturbing Beauty” and that took place on the penultimate day of Paris Fashion Week, held this year digitally due to the pandemic.

Only the light of the moon seemed to illuminate the room as it was reflected in the crystals of the lamps, while the models paraded with a firm step and a dance group danced trying to avoid blocks of spikes installed on the mirrors.

An obvious metaphor by Chiuri about the dangerous and arduous task of accepting himself trying to fit into the beauty canons imposed on women.