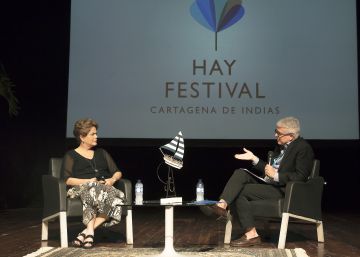 Dilma Rousseff She is convinced that inequality is the great question of our times. The first president of Brazil elected at the polls and dismissed by the Congress of his country in 2016, says the wave of conservative governments in Latin America is cutting the rights of women and minorities. In that context, he argues, "the big mistake for the left and the progressives is to believe that there is a neoliberal consensus that has to be followed."

Combative and passionate, the successor of Lula da Silva, reelected and ceased in an episode with wounds that remain open, he put in the pocket of the public of the Hay Festival, which ended up taking selfies with Brazilian politics after one of the most anticipated conversations of the cultural event held annually in Cartagena de Indias, the walled city of the Colombian Caribbean.

"The world has never had so much accumulated wealth and so much accumulated poverty," Rousseff assured Javier Moreno, director of EL PAÍS AMÉRICA, Friday at the Convention Center on the Bay of Souls. "We live perhaps the most complex stage, in which the economy assumed all the values ​​and projects of neoliberalism," he said, pointing to the "brutal increase in inequalities," even in developed countries, as the biggest challenge on the left. "It is the great cognitive capture of our time," he emphasized.

“The left must be interested in the facts that neoliberalism imposes on society,” he pointed out when he tried to force the alleged consensus around an ideology that reduces the role of the State. To overcome extreme poverty, quality education, health and services that are under attack with current conservative governments are needed. "Neoliberalism has opened the way for right-wing populism," said Rousseff, a figure claimed by Democracy in danger, the acclaimed Netflix documentary which chronicles his impeachment process.

Dilma, as everyone calls a woman in Brazil in his youth he was arrested and tortured by the dictatorship, he conceded that there is also left-wing populism, and that in other times Latin America has had a right that was neither fascist nor neo-fascist as, he argued, is the case of the Government of Jair Bolsonaro. He accused that alliance that includes market sectors, the questioned Justice Minister Sergio Moro -which was before the judge who persecuted Lula-, the military or large media corporations, to sell the sovereignty of the Latin American giant and deliver the Amazon to mining exploration. For those sectors that believe in "cultural Marxism," communism inflicted on feminist movements and cultural and political activities.

Can the organized left in parties pick up the growing discomfort in the Latin American streets? Does a left that is not feminist, or does not defend the environment, have a future? "The extreme right in Brazil is at another stage," Rousseff said, arguing that the Workers Party, to which she and Lula belong, has been a champion of the struggles of women and minorities, as well as the defense of the Amazon and the reduction of deforestation. The president also said that the left, in addition to the political parties, groups the social movements that are under attack today. "The left never made politics without considering the importance of those who have nothing."

The crossroads that overwhelm the left also apply to social democracy as to the Latin American center, defended by dodging full self-criticism. When Moreno pointed out that Venezuela has become a weapon to stir fears, and part of the Latin American left fails to distance itself clearly from the regime of Nicolás Maduro, Rousseff resisted attacking Chavism fully. "I would not support, I would denounce the military intervention in Venezuela," he replied in that counterpoint about a process that, he considers, is gestated at power poles outside the region. "What is in question in Venezuela is Venezuelan oil," he said.

Another idol of the Latin American progress broke into the exchange. Moreno invoked a phrase by José Pepe Mújica: "You have to learn from the mistakes made and start over." With a remarkable mental rapidity, Rousseff complemented it by remembering that the phrase of the Uruguayan former president continues to say that "there are no definitive defeats or definitive victories."