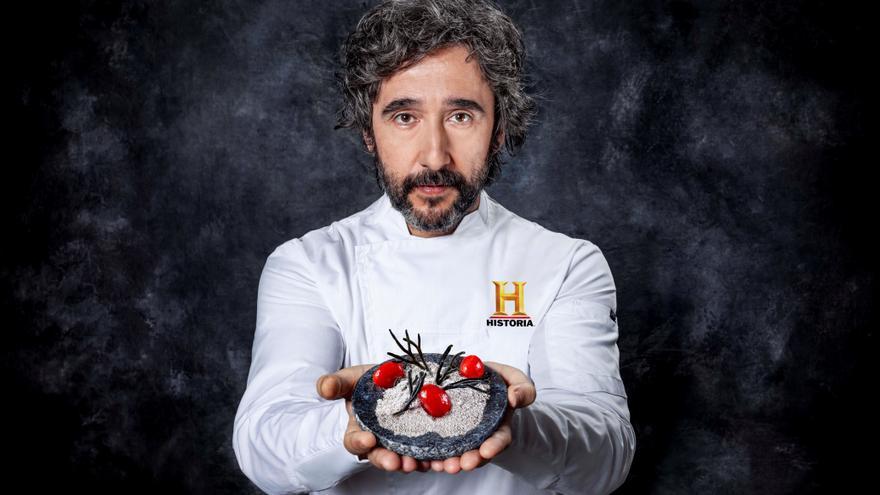 Madrid, Mar 25 (EFE) .- Diego Guerrero, with two Michelin stars at DSTAgE (Madrid), has recreated “The Last Supper” “more symbolic and conceptual” for Canal Historia, a documentary that celebrates nine editions in which prominent chefs They have covered that last meeting between Jesus and his disciples and which opens this Friday at 10:00 pm.

For the chef from Vitoria, the main challenge was to find what he could contribute after eight previous programs about a dinner “of which everything is known” and, in his documentation process, he verified that “nobody cared if what they ate was tasty or no or who cooked, because the essence is in the symbols and metaphors, “he says in an interview with Efe.

That is why he begins it with the kiss of Judas, turning the salt that the traitorous apostle spilled on the table into a rock of Himalayan salt that must be “kissed” to eat a shrimp from Motril (Granada). “Kiss, salt and betrayal,” he sums up.

Symbolism that also includes its lamb dish, made up of a skin in the shape of a communion host – based on obulato and reduced lamb juices – that accompanies a bite of its meat. “He talks about the most important milestone of that dinner, the one that continues to be repeated today in the Eucharist, which is communion,” he details.

Guerrero also gives historical context to that last supper with old bread – aged through different techniques of fermentation and inoculation of a fungus – that evokes unleavened unleavened unleavened, which according to Jewish tradition should be eaten at Passover. On a slice, arrange an anchovy due to the importance of salting at the time.

And he alludes to the Romans with his garum tomato. “I wanted to relate the social and political context in the menu and until now no one had spoken about the Romans, whom I symbolize with the garum, one of the oldest dressings, based on fish fermented in amphorae,” he says.

Smoked eel, documented as part of that last supper, with crispy roast chicken skin to reflect “the environment of simplicity” that accompanied the meeting, and bread with carob ganache and crunchy barley -which emulate a crown of thorns on the plate- They complete the menu designed by Diego Guerrero, who claims to be a believer: “In my own way; I believe in God, but it is difficult for me in the Church.”

Guerrero had already been proposed by Canal Historia to take care of this dinner in a previous edition, but he was unable to. Now he takes up the witness of chefs like David Muñoz, Paco Roncero, Ramón Freixa, Roberto Ruiz, David García, Fernando Canales, Mario Sandoval, Quique Dacosta, Ángel León, Francis Paniego and María Marte, who since 2012 have offered their vision of the most famous dinner.

The fake lamb skin, one of the most representative dishes of this symbolic Last Supper, will go to the DSTAgE menu, which reopened in July after the forced closure by the covid.

“I cannot complain because we are open, but it is being very hard. Holding out is a tremendous effort, but we have assimilated that we have to survive, open every week and overcome the problems that you can solve”, says who prefers to keep one ” very positive attitude “despite everything.

It also maintains open DSPEAK -which it took away the last name ‘easy’ (easy) due to the pandemic difficulties for the hospitality industry- and its R&D and events premises DSPOT, which recently opened in a new location, but has not yet been able to recover the DPICKLE Room cocktail bar.