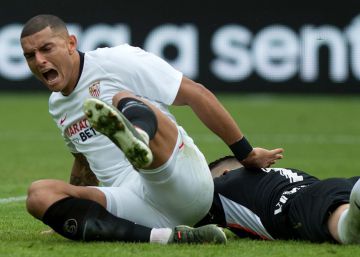 “What I like most about Diego Carlos is that he really wants to learn. It has adapted wonderfully to what we want. ” The words of Julen Lopetegui, coach of Seville, reveal the attitude with which the Brazilian central undertakes every day of work in the Andalusian team, third classified in LaLiga. The new Seville designed by Monchi on his return to the entity he has one of his angular pieces in defense. Before Leganés, last Sunday, Diego Carlos made the winning goal and it set a splendid performance. It also resulted in a very special communion with the stands that reminded of the sevillism with centrals such as Javi Navarro and Pablo Alfaro. Also a few years ago with Paco Gallego, international defender who played in Sevilla and Barcelona.

Diego Carlos, born in Brazil and 26 years old, emigrated young to European football. The defender came to the Estoril, of the Second Portuguese, in 2014. He was then assigned to the subsidiary of Porto. "He knew Diego Carlos from his time in Porto B," said Lopetegui, who made him train on some occasions with the first Portuguese team. Diego Carlos returned to Estoril and in 2016 he was signed by Nantes, French. There he settled down playing 108 games in three seasons. The gala league is one of the favorite fishing grounds of Monchi, who already tried the signing of Diego Carlos for Rome.

When the sports director returned to Seville with full powers, he did not hesitate to pay 15 million euros to Nantes for the defense. He now has a clause of 75 and a contract until 2024. He has played 15 LaLiga matches and two in Europe, with one goal scored. It is a fixture for Lopetegui and forms a very safe couple with Koundé. "Diego Carlos catches my attention how quickly he has adapted to the city and the character of our club," says Pablo Blanco, coordinator of the lower ranks of Seville and defense of the first team for 13 seasons. “He is a very powerful player. A modern center because it also has an acceptable exit of the ball, with a good hit. The last such good emergence of a central in our team was that of Lenglet, ”adds Blanco. The coach finds some similarities in Diego Carlos with Pablo Alfaro and Javi Navarro, but he quickly skips a name. "For me he plays as Paco Gallego, our captain in the late 70's. That jump, that aerial game and that power at the crossroads …", concludes Blanco.

"He's stronger than vinegar," Nolito jokes when asked about the Brazilian. Its physical molding, however, is not a product of weight work. In an interview with the club's media, the defense said that the gym only visited him for stretching exercises. "It's a matter of genetics," said the player himself.

The adaptation of Diego Carlos has been very good for Sevilla. He is loved in the locker room and only feared when he claims the bets won from his teammates in football-tennis matches, the true passion of many of the Sevilla squad players with which they end the training. Few things alter the mood of the Brazilian. If anything, the memory of Emiliano Sala, his friend and partner in Nantes and died in a plane crash last February.

The new Barça opens with victory against the champion CSKA