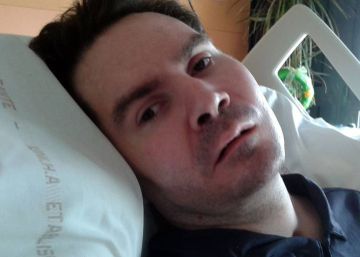 Vincent Lambert already rests in peace. The 42-year-old Frenchman, quadriplegic and in a vegetative state since he suffered a traffic accident in 2008, has died today at 8.24, nine days after the hospital in Reims where he was admitted disconnected him from the machines that kept him alive , as confirmed by EL PAÍS a nephew of Lambert. Lambert had become the symbol in France of the debate on the right to a dignified death, because his case caused a long and hard judicial battle that divided his family and it has made the entire French society reflect on the laws around the end of life and euthanasia. On one side were his parents, traditionalist Catholics who opposed what they called "disguised euthanasia" and who tried, through all possible legal means, to prevent their disconnection until almost the last moment. And on the other, his wife, Rachel Lambert, and most of his family, who argued that Vincent would not have wanted to continue living in the conditions he did for more than a decade. The problem is that Lambert did not leave his wishes in writing in a living will, which marked the complex process that, with his death, now comes to an end.

Euthanasia is not legal in France. But the possibility of letting a person die in an irrecoverable state is provided by the Leonetti Law -In the name of the deputy who drafted it- of 2005. This regulation establishes that medical care "should not be prolonged with unreasonable obstinacy" and that, at the moment they appear "useless, disproportionate or without any other effect than the artificial maintenance of life, may be suspended or not be undertaken. " The law was updated in 2016 to include a "deep and continuous sedation" so that the patient does not suffer until his death occurs.

The difficult case Lambert has reopened the debate on the suitability of the norm Is the Leonetti law enough? For the Government of Emmanuel Macron, it seems that yes. According to the Minister of Justice, Nicole Belloubet, the regulations are "very balanced and very sensitive".

However, not all, even within Macron's party, La Republica en Marcha (LREM), agree. The pro-government deputy and professor of medicine Jean-Louis Touraine considers that the current law is too vague when it comes to establishing what constitutes an "unreasonable obstinacy". He warns that "only a clarification of the law will make it possible to avoid situations of impasse" such as that suffered by Lambert.

Added to this, add other critics, the lack of guarantees that the wishes of the patient will be followed. The final decision on whether to stop the care of the patient or not is in the hands of the doctors who serve him, who should consult their immediate relatives if, as happened with Lambert, there is a vital testament that explains their wishes. But there is no defined hierarchy to decide, in that case, who within the family has the main voice. Extreme that would have avoided the Lambert case, which was reconnected twice, in 2013 and last May 20, after his parents resorted to justice the decision of doctors to stop their care despite having the approval of the wife.

François Lambert, Vincent's nephew and one of the greatest advocates of a dignified death for his uncle, has also criticized the excessive time it can take a patient to die by this law, since it leaves in the hands of doctors that the end protocol of life extend only a few days or up to two weeks, to avoid being accused of euthanasia. "It would not be a bad thing if the law authorized that the process be faster and that there would be a protocol that would also be" unified "throughout the country and focused on" protecting "the patient, says the nephew, who decided Study law in the wake of your uncle's case.

What if euthanasia is legalized? This is what associations like the Association for the Right to Dignify Dignity (ADMD). "We must get out of hypocrisy and allow a person to leave in a few minutes and without suffering, not wait days and days, which is a suffering for the patient and their families," denounced its president, Jean-Luc Romero, in reference how long it took for Lambert to die, which he described as "a slow euthanasia."

Touraine is another firm defender of euthanasia, in whose favor wrote at the end of last year a tribune in Le Monde that another 155 legislators signed. The deputy promotes a law of euthanasia for two years, however, the Government has not included in the reform of the bioethics law that is preparing. And this despite the fact that, according to the polls, France seems ready for a law to legalize it. According to a March survey, 96% of the French are favorable to some form of euthanasia, compared to only 4% who strongly oppose it. The vast majority (60%) considered that the possibility of euthanasia should be limited to cases of "severe and incurable suffering", although a not insignificant 36% is favorable even to euthanasia without conditions.