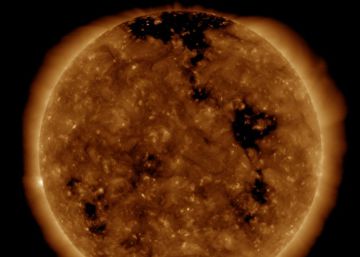 Nearly one million people were left without power for nine hours on September 29 on the Canary Island of Tenerife. There is still no explanation of what happened to cause such a blackout. As said those days the director of Operation of Red Eléctrica de España (REE) in the Canary Islands, Eduardo Prieto, “a fortuitous failure like this is not enough to throw away the supply (…) and we think that there must be other triggers” . A team of scientists now proposes an element that could be decisive: a geomagnetic storm caused by solar activity.

“In the geomagnetic observatory of Güímar, in Tenerife, the magnetic field on land was disturbed from two days before,” explains Cid

“If you are looking for an external cause, here is one,” summarizes Consuelo Cid, head of the National Space Meteorology Service. Cid and his group from the University of Alcalá have analyzed the records of those days and believe that two solar phenomena that, together, overloaded the vulnerable island facilities, could coincide. When they set out to study the data, they found a clearly anomalous situation in the space environment: the satellites measure a sharp increase in solar wind on those days and that disturbance is also collected on the ground. “In the geomagnetic observatory of Güímar, in Tenerife, the magnetic field on land was disturbed from two days before,” explains Cid. On the Sun, as you can see in the image, there was a coronal hole near the equator, a phenomenon that can be a source of rapid solar wind currents that sometimes have the potential to produce geomagnetic storms. “The fluctuations measured by Güímar are due to the rapid current of the coronal hole, that is undeniable, but it is very likely that right in front of that coronal hole, guiding that shock that appears on the 27th, there is also an ejection of coronal mass”, explains the physics. And he summarizes: “That would make the sum of two dangerous events cause a bigger one.”

On the 27th, the first disturbance is observed in the records and from there a not very serious, but constant fluctuation is generated, which is recorded for two days, until the blackout, in that Güímar observatory, which is less than 30 kilometers away of the substation that failed Granadilla de Abona. “That fluctuation was due to the safe solar wind,” says this expert in space meteorology, who presented these results at a congress of specialists, the European Space Weather Week (PDF). Now, Cid and his group are waiting for new measurements to confirm that next to the rapid current of the coronal hole that solar ejection occurred that multiplied the magnetic pressure on Earth. All the instrumentation of a GOES satellite, operated by the US National Oceanic and Atmospheric Administration, was out of service at that time due to saturation caused by solar wind.

As the expert explains, this solar phenomenon was noticed throughout the planet, but the hypothesis that the blackout of Tenerife had been caused by this activity is explained by the closed-loop configuration of the electrical infrastructure of the island, which would make it especially vulnerable. “The situation in Tenerife is different and the consequences depend on technology; that electric field may not have consequences, but it depends on where you are. That disturbance will make the grounding of the ground, which is a conductor, instead to disperse generate a circuit that turns on itself by putting more current into it. In more branched networks, the induced currents can disperse and not cause damage, “says Cid, who made his hypothesis known in the radio program Coffee break.

Consulted by this newspaper, Red Eléctrica de España (REE) considers this explanation unlikely, although they have not studied it. “All known incidents related to solar storms have occurred at much higher latitudes and in countries with very extensive and poorly meshed transport networks, since the greatest effect of solar storms in areas near the poles is joined together with the existence of rings large electrical network that causes strong surges that can cause the equipment of the transport network to fail. Neither of these two circumstances occurs in the Canary Islands, “says REE Operation Director Tomás Domínguez.

“Although less frequent, the combination of solar events seems a more than credible hypothesis to be taken into account,” says del Toro

“However, we will always be attentive to any additional information that may appear and that may contribute to explain some of the events that occurred in the Tenerife incident,” Dominguez adds. On the causes of this blackout, REE insists that “there is currently a open procedure and until it is finished it will be difficult to know exactly what has happened. “

Cid agrees that geomagnetic storms are more likely to affect higher latitudes, but says it is not the first time that they encounter similar phenomena far from the poles, such as an incident occurred in Vietnam in 1972. In addition, the chief scientist of the National Space Meteorology Service insists that it is possible that the island’s electrical infrastructure, in an isolated loop-shaped closed circuit, made her especially vulnerable to this event.

“Although less frequent, the combination of the solar events of which they recorded constancy with the configuration of the electrical network on the island seems a more than credible hypothesis to be taken into account,” says solar physicist José Carlos del Toro, of the Institute of Astrophysics of Andalusia (CSIC). “The information on the poster seems incontestable and the explanation plausible sea” says del Toro, who is not a specialist in space meteorology but in solar physics, and who considers Consuelo Cid “our highest authority on the subject in Spain.” “In the absence of other reasons of a technical nature, the solar origin could be behind the phenomenon,” adds del Toro, who leads an instrument of the Solar Orbiter (European Space Agency), which will be launched next February and will allow ” learn more about the solar origin of the phenomena we measure in the interplanetary environment and, in particular, in the vicinity of the Earth, “he explains. “Events such as that, if the hypothesis of Cid and his collaborators is true, took place on the island of Tenerife,” adds del Toro.