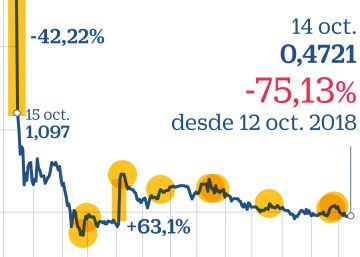 A relevant event sent to the CNMV at 1:56 p.m. on a day like today, October 15, but last year, Dia's story changed. In it, the supermarket group detailed that it had undertaken a “review process” of its financial statements that affected, on the one hand, the estimates of results for the end of the year, and on the other, the 2017 accounts, with a patrimonial decrease of 53 million in Spain.

A profit warning that sank the action 40% that day and that led to a catharsis that keeps the company in the most delicate moment in its history. The consequences on the business are known: Dia closed 2018 with losses of 352 million that made it enter due to dissolution, and that increased to 418 million in the first half of 2019; sales have plummeted, the number of stores has been reduced by 600 and the stock has lost 75% of the value, punishing thousands of investors. In between, an ERE to 1,600 workers, three CEOs and a shareholder conflict that ended with Letterone taking control after a bid at 0.67 euros per share, and which allowed the recapitalization of the company after a negotiation to the limit with the banks.

But that relevant fact also uncovered a modus operandi installed for years in its financial management. Both the company and its auditor, KPMG, spoke in the 2018 accounts of “irregular accounting practices, carried out by certain employees and senior executives of Spain and Brazil, circumventing the internal controls established by the group”, in order to “ artificially increase the commercial margin ”.

Estimates swollen in the commercial discounts to be received from suppliers, or invoices registered in a timely manner or irregularly, were some of those practices, hidden from shareholders, auditor and the board, which also reached their Brazilian business, as a forensic report commissioned to EY and whose existence advanced CincoDías.

It revealed the existence of emails among those investigated that would reveal the intention of their senders to deliberately hide information, as well as that there were no unregistered cash outflows. On the radar of this process were former CEO Ricardo Currás and Antonio Coto. The first was the head of the company's management for seven years, until August 2018, just before the earthquake that hit the company in October. The second was for several years responsible for the business in Brazil and Argentina. Freddy Wu also left the company for seven years as CEO of Dia in Brazil, and Amando Sánchez, corporate director and head of the company's financial field during the Currás stage.

Dia's previous board of directors, with Borja de la Cierva as CEO, took the case to the Anti-Corruption Prosecutor's Office last February, providing the EY forensic report and its conclusions.

This opened the judicial aspect of the Dia crisis that the current board of the company, already controlled by Letterone, has neither had nor intends to stop. The company is still waiting to hear the conclusions of the anti-corruption prosecution, which has not yet notified any progress in its investigation since Dia transferred the EY report. The sources consulted explain that the times are adjusted to what happens in causes of this nature.

Of all this process, and according to the findings that result from the prosecutor's investigation, criminal consequences could be triggered. Something for which time must still pass, the one that Letterone has not lost to make a blur and a new account with respect to the previous management team.
The bicefalia formed by Stephan Ducharme, as chairman of the council and strong man of the fund founded by Russian tycoon Mijail Fridman, and CEO Karl-Heinz Holland, have turned the board of directors, which only Jaime García Legaz has survived , and to the Dia steering committee, which a year after the beginning of its crisis has a strong German accent.

Executives such as Faustino Domínguez, executive director of the business in Spain; Miguel Ángel Iglesias, former legal director; Alfonso Torres, appointed commercial director in December 2018; María Miralles, former director of transformation, or Damián Dircie, appointed last January as CEO in Argentina, are some of the figures that have left the company since Fridman's men took control of the company. Of the steering committee prior to the Letterone bid, only Enrique Weickert, chief financial officer, Pedro Barsanti, IT manager, both incorporated by the previous board, survive; and Alejandro Grande, director of human resources of the group. All of them are in charge of checking if Dia can have a second chance.