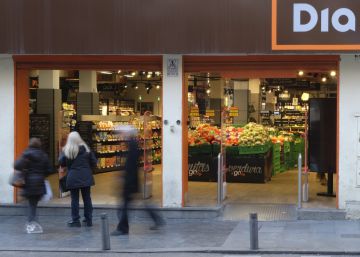 Dia's shares bounced more than 17% in the early stages of this Thursday's session after increasing LetterOne, a company controlled by Russian investor Mikhail Fridman, its participation from 69.8% to 74.82%, once Completion of the capital increase of 605 million euros.

Specifically, the titles of the supermarket chain began the session with an increase of 3.3% that minutes later, at 9.23 hours, expanded to 17.90%, to be exchanged at a price of 0.16 euros.

The supermarket chain Dia has completed 100% and closed with "success" the capital increase of 605 million euros. Specifically, a total of 1,384.7 million new shares have been subscribed, representing a total of 74,054% of the second tranche of the capital increase, which were addressed to minority shareholders, for an amount of 138.4 million euros.

Also, during the discretionary adjudication period that the company authorized for the rest of the shares and which was aimed at institutional investors, a total of 485.1 million new shares have been subscribed, representing 25.9% of the total amount of the second section, for an amount of 48.5 million euros.

In this way, LetterOne subscribed all those new shares, insofar as they were not subscribed during this discretionary adjudication period.

Thus, the company of Fridman has subscribed a total of 4,562.2 million new shares, representing 75.4% of the amount of the operation, with a value of 456.2 million euros. As a consequence, LetterOne has gone from controlling 69.8% of the company to the current 74.8%.

The firm has stated that this fact shows "investor support for the company as well as its growth plans, highlighting market confidence in its future." In this way, the teaching will focus "exclusively on the challenge of business change".