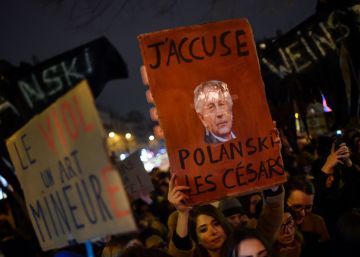 For a moment, it seemed that tear gas was going to reach the red carpet. In fact, he brushed it, although by the time the great stars invited to the 45th Caesar ceremony began to arrive, the main awards of French cinema had already dissolved. Those who had not dispersed were the hundreds of feminists who protested Friday night around the Parisian Sala Pleyel against director Roman Polanski. Neither did the indignation disappear – neither inside nor outside the venue of the ceremony – that surrounded the entire gala for the record nominations for the film. The officer and the spy from the Franco-Polish filmmaker despite the new accusations of rape against him, which has led critics to describe the annual Parisian party as “the César of shame.” “There are 12 moments where we are going to have a problem tonight,” the presenter of the gala, the humorist Florence Forestier, told the beginning of the ceremony, referring to the 12 statuettes to which Polanski’s film aspired. Finally, there were only three, although two of the César were taken directly by the absent director, for best adapted screenplay and best director. However, the main award of the gala, César for best film, went to his great rival, The Miserables from Ladj Ly, which was also done with the maximum number of statuettes, four (with the audience prize, revelation and assembly actor), of the night.

Even so, Forestier was not wrong in his predictions. Not even the announcement of the Franco-Polish filmmaker that he would not attend the gala – second hours later by the entire team of The officer and the spy– He calmed down. The tension was palpable in the room, full of artists who in recent weeks have openly expressed their irritation with the Film Academy, although finally they did not take advantage of the speeches of the ceremony to denounce it. In any case, it wasn’t just for Polanski. This is in the end only a symptom, they consider, of a much broader problem of French cinema: opacity in management and lack of parity and diversity in the direction and membership of the Academy that governs them, which lead to situations like the rain of nominations to Polanski or that, in its 45 years of history, only one woman, Tonie Marshall, has taken César in the prestigious category to the best director. And that was 20 years ago. I could have changed the story tonight if I had won Céline Sciamma for Portrait of a woman on fire, but we will have to wait another year.

In an attempt to calm the spirits, the Academy, whose leadership resigned less than two weeks ago collectively before the inability to stop the crisis, had made, on the eve of the gala, some gestures. Beyond having a woman as the main presenter, she also announced the interim appointment, until new more egalitarian statutes are approved in the coming months leading to a more diverse directive, to another woman at the head of the César Academy, the producer Margaret Menegoz. As icing, another woman, actress Sandrine Kiberlain, presided over the gala.

Neither Forestier nor Kiberlain hid the difficulty of presenting a ceremony surrounded by so much pressure and discomfort and with the name of Polanski – who avoided quoting, referring to him as Popol, among others – and sexual abuse in the cinema hanging around the whole ceremony. In the initial minutes, Forestier already launched the “elephants” of the gala: he made subtle but sufficiently obvious jokes about diversity (or its absence), about the lack of nominated women, He talked about “predators, sorry, producers” in the world of cinema and “sexually” harassed one of the dancers before sending him behind the scenes with the promise that “he will prepare some contracts.”

“Welcome to the last one, I say the 45th Caesar ceremony,” he continued through the laughter and smiles, more than one tense, of the audience. Kiberlain corrected it slightly later by describing this gala as “the last ceremony of the Caesars of one era and the beginning of another” after a year “symbolic of the word released from those brave voices that have risen and will do that, I hope, never suffer the intolerable, ”he added in reference to complaints made by actresses such as Adèle Haenel, which has become one of the faces of Me too French after accusing director Christophe Ruggia of having sexually abused her as a teenager. Losing Caesar to the best actress, finally awarded to Anaïs Demoustier (Alice’s advice) made one of the most political speeches of the night probably lost. On the eve of the gala, Haenel had declared The New York Times that “to distinguish Polanski is to spit in the face of all the victims. It means: “It is not so serious to rape women.” The actress left the room after knowing that Polanski was named best director. It was not the only one: at least a dozen guests left at that time to follow the most controversial César gala in their history. The host of the gala refused according to journalists to take the final photo and, on her Instagram account, she declared herself “disgusted.” On the street, protesters were again crying out against “the Caesar of shame.”