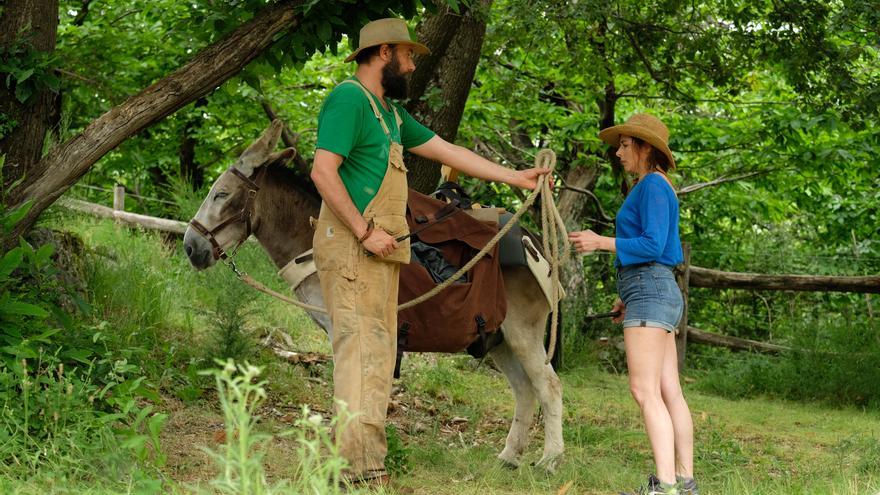 Madrid, Jan 14 (EFE) .- Despite Filomena and the tremendous cold wave that has frozen expectations in movie theaters, five “brave” premiere this Friday: a romantic story of twilight loves, a French comedy, a immigration drama and two German animated films for children, both highly recommended.

Paul Morrison directs Dave Johns (“Me, Daniel Blake”) and Alison Steadman (“Pride and Prejudice”) in this romantic drama that tells a love story between a couple of a certain age who meet while both walk their respective dogs. .

Throughout “23 walks” to their pets through the streets of London, Dave (Dave Johns) and Fern (Alison Steadman) are telling their lives until a romance blooms between the two; but neither has been entirely honest with the other and when their secrets surface in the middle of the plot they compromise their future together.

“BEYOND WORDS”: THE SECTION BETWEEN INTEGRATION AND ROOTS

This co-production between Poland and the Netherlands shot in black and white addresses both ends of the immigration spectrum: those who cannot hide it because their physical appearance gives them away and those who do not look like it and refuse to be considered as such.

Directed by the Polish Urszula Antoniak, “Beyond Words”, or “Beyond Words”, as it has been titled in Spanish, tells the story of Michael (Jakub Gierszal), a Polish immigrant who has succeeded as a lawyer and is already considers German, and how a small incident causes his comfortable and successful life to shake.

IN “VACATION WITH YOU … AND YOUR WOMAN”, THE PSYCHOLOGIST IS A DONKEY

“Holidays with you …. and your wife” is a French comedy that takes advantage of a desperate trip undertaken by the teacher Antoinette (Laure Calamy), in love with the father of a student who has left her lying at the last minute on a promised vacation .

Directed by Caroline Vignal, the comedy, selected for the 2020 Cannes Film Festival, becomes reflective without losing its sense of humor when the protagonist is forced to confess her most intimate thoughts to the donkey assigned to her in her week of walks through the mount, following the routes of Les Cévennes, the same ones that a disgruntled Robert Louis Stevenson traveled.

From Germany comes this cartoon fable for slightly older children, “Fritzi: A Revolutionary Tale”, based on the book by Hanna Schott (“Fritzi war dabei: Eine Wendewundergeschichte”) which tells the story of Fritzi, a fourth grader in the city of Leipzig, in East Germany, during the summer of 1989.

The girl offers to take care of her best friend’s dog, Sophie, during the summer, but September arrives and discovers that Sophie and her family have fled to the West through Hungary.

With a sense of pedagogy, this film directed by Ralf Kukula and Matthias Bruhn introduces new generations to the complex political and historical events that led to German reunification.

“THE ELFKINS”, GERMAN ELF WITH A LOT TO TEACH

Also from Germany, and directed by Ute von Münchow-Pohl, comes this children’s animation film that reveals the story of the Elfkins, gnomes who for more than 200 years have lived underground to avoid outside contact and any interaction with beings humans, whom they consider ungrateful and bad.

But one day, Helvi, Kipp and Butz (the Elfkins) decide to come to the surface of the earth and, after many adventures, one of them, Helvi, befriends Theo, a slightly grumpy pastry chef who will remind him her and all the other gnomes her true purpose in life: to help others.

Emilia Pardo Bazán was already an ‘influencer’ a century ago