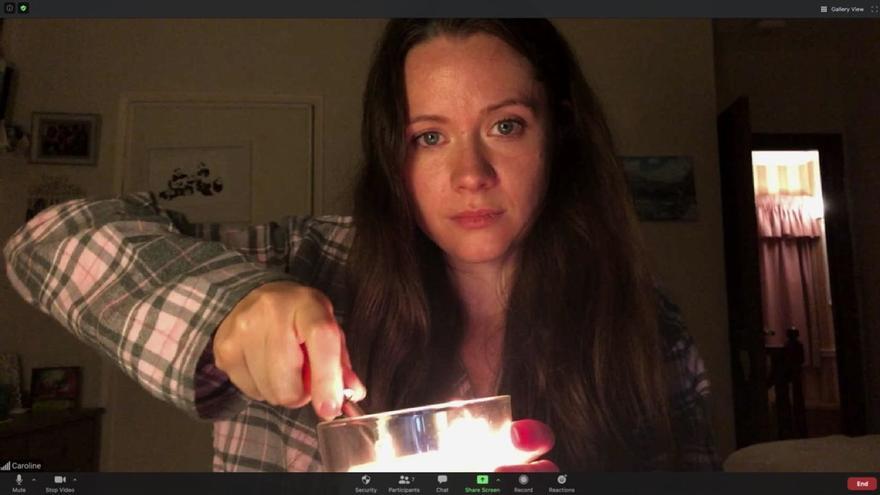 The creators of filmic intrigues and terrors have always been attentive to technological developments, as they are opportunities for the reconfiguration of old scares that can be presented in novel-looking situations. The irruption of the mobile phones generated the corresponding thrillers and terrors like Cellullar, Phone or the trilogy Lost call. And the rise of communications on-line it has favored new narrative games.

In our century, and in the heat of pop sensations like Blaird’s Witch Project, horror films presented as found-footage fictions have proliferated (found footage). The increasing importance of telematic communications has prompted a new materialization of this type of proposal: films where the cinematographic screen takes the form of a personal computer desktop screen. HostFor example, he presented a séance (which, obviously, is twisted) in the form of a videoconference in supposed real time.

The films that work on this artifice, a kind of epistolary novel for our times of remote and immediate communication, have been labeled as screenlife films or destktop films. More than one clever creative has seen the possibility of giving another twist to the cost cutting of digital horror cinema low-cost. Director and producer Timur Bekmambetov (Guardians of the night, SE busca) has produced two of the biggest hits of this trend: the supernatural horror film Removed and the thriller Searching.

Although we can find much more distant precedents, such as the fantasy of near futures Thomas is in love (2000) or the terror in old video chats that recounted The Collingswood Story (2002), perhaps the first two films limited to computer screens that had a strong impact on the mainstream premiered in 2014. Levan Gabriadze signed the aforementioned Removed, a fiction of vengeful spirits versed in the field of telecommunications that became one of the great economic successes of the production company Blumhouse (Insidious, Paranormal activity). And Nacho Vigalondo wrote and directed the thriller neo-Hitchcockian of fatal fans and hackers Open windows.

Vigalondo signed a narrative and aesthetic game that begins with echoes of the voyeuristic Brian de Palma of Double body or Femme fatale, finds its denouement in an escalation of action and script twists, and ends with a certain poetics of the digital image that explores the calm after the storm. A follower of a movie star is tempted by a telephone voice to punish her for giving her an alleged sit-in at a promotional event. The antihero protagonist tries to transcend his nature as a supposed puppet of an invisible criminal.

Vigalondo incorporated some interesting brushstrokes on the dark side of the fandom within this thriller much freer than his approach could announce. The proliferation of electronic eyes, adding computers, mobile phones and other cameras, multiplies the possibilities of choosing points of view through montage. The authors of RemovedInstead, they opted for greater self-restraint in their tale of the supernatural revenge of an angry spirit. The desktop of a personal computer is the place through which we witness the misadventures of a group of friends who are communicating through social networks and videoconferencing … when a new profile begins to haunt them.

Bekmambetov, producer of Removed, has also directed Profile– A screen thriller inspired by the true story of journalist Anna Erelle. Erelle assumed a false identity on social media to contact Islamic State recruiters and discover their modus operandi. To enhance the uncertainty and add emotion, the director and his team added a few doses of doubts (romantic?) And professional recklessness in the conduct of their fictionalized protagonist. The main duo offered a solid acting work that helps to maintain tension and abstract from the usual implausibilities in the representation of the journalistic profession.

The experience of confinement and the health emergency derived from the outbreak of covid-19 has stimulated new creators to bet on screen terror. Filmmakers such as the Argentine Max Coronel or the British Rob Savage had the astuteness to prepare urgent, timely or opportunistic feature films, which joined the screenlife films with the pandemic outbreak. In both cases, the repertoire of clichés of the terror of spirits and demons cornered any comment or reflection on a present of isolation and social distances.

Savage achieved a rather limited and naive, but potentially sympathetic result. its Host carries the spiritistic games usual in commercial terror and scare-centric from demons, ghosts and stays to virtual meetings organized through Zoom. The commitment to narration in supposed real time entails an extreme temporal concentration of events (the film only lasts 56 minutes). This agitation perhaps favors that part of the audience is carried away by an accelerated greatests hits of the shock.

To a large extent, Savage refrained from offering a portrait of the confinement present. Cultivate more the manners joke, such as when a séance is interrupted because the medium receives an online purchase, than the brushstroke of comment or reflection. On Host, confinement is basically a set that is made explicit through the appearance of a pair of masks and some (fleeting) allusion to pandemic loneliness and its consequent sadness.

Argentine production The dark part coincides in these approach. It threatens to propose a possible allegory about discouragement or depressions derived from social distance, but ends up explaining a story of demonic presences that colonize the spirit of psyches in a vulnerable situation: overcome your sadness or you will be possessed. The little skill shown by some interpreters suggests that the play has a rather amateur origin, and horror fans will not find scenes suggestively disturbing either.

Now the terror of screens begins to be sufficiently established. And the filmmakers see in it the possibility of parodying their clichés. The recent Untitled horror film is a horror comedy about actors working on a television series under threat of cancellation. As a hobby and exploration of job opportunities, they begin to shoot a scary movie in their respective homes and with their mobile phones.

In the terrifying aspect, the work seems only suitable for stalwarts and comparatists: no special care is detected in the visual staging of scenes already seen in other films. Interestingly, the proposal can be more attractive as a humorous look at the lives, hobbies and egos of Hollywood actors, provided its limited (extremely limited?) Nature of joking between friends is assumed.

Meanwhile, the director of Host He has already returned to the genre that he helped popularize: he presented his next feature film, Dashcam, in the last and recent edition of the Sitges International Fantastic Film Festival. Strangely, another filmmaker with a past in pandemic terror has just released a movie with the eponymous title. Christopher Nilsson had signed Unsubscribe, a half-length trolling film designed to be a number one box office absurdity at the closing of cinemas in the United States. His next movie starts out as thriller of screens but ends up opening the field of possible images to build an express journalistic investigation intrigue around a political assassination.

The Dashcam de Nilsson tries to honor referents of conspiracy fiction such as Impact. Its protagonist is a journalist dissatisfied with developing technical tasks that meets the story of his life: an involuntary leak gives him access to various audiovisual, sound and photographic recordings that compromise the official version of the death of a prosecutor. Unfortunately, and as usually happens in screenlife films, you end up tightening the rope of verisimilitude too much and opting for lazy screenwriter shortcuts.

Nilsson’s film shares weak points with other similar proposals, such as the difficulty of achieving satisfactory outcomes. The audiovisual that starts from found footage can facilitate the immersion of the viewer with images that look more raw that try to seem fragments of reality. At the same time, some recurring problems stand out precisely in the field of verisimilitude. Inertia typical of the terrifying genre, such as the tendency of the victim-characters to make very wrong decisions, can squeak more easily. Perhaps because they do not appear involved (either due to the nature of the genre, due to economic precariousness, or both factors) with the set work of a conventional cinematographic world. And perhaps also because the nakedness of the desktop films makes it easy for us not to compare the characters with those we saw in other movies, but with ourselves.