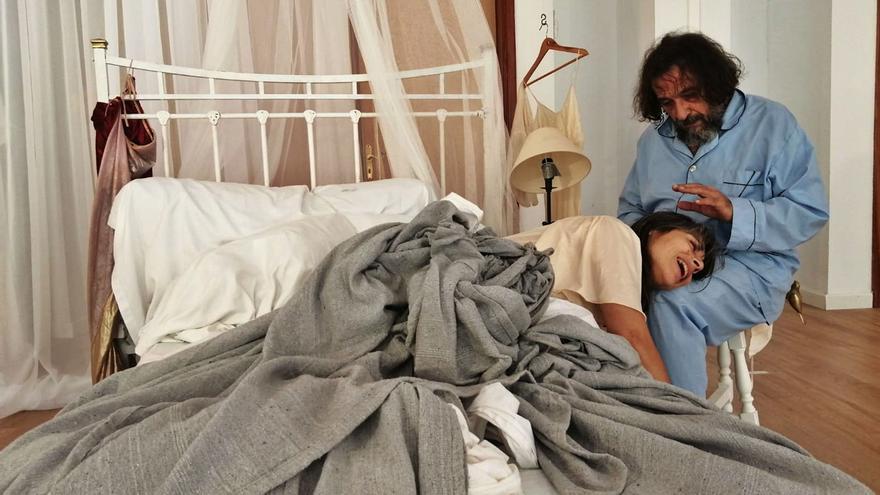 “I propose that all leisure and culture be turned into them”, wrote these days the Catalan novelist Miqui Otero in a reflection entitled The party of the third age. “For once, let the fun be exclusively yours; that the world was theirs, that is why they built it ”. And this is the plot of the show The Dream and the Wake, which makes up the stage debut of the newly created company Atlante Cultura & Teatro, founded in Gran Canaria last February 2020 by the Argentine theater entrepreneur, producer, actor and teacher Miguel. Ángel Maciel, former member of the Canarian theater company La República, and the teacher and actress Griselda Ponce, conceived as a theatrical project that combines her artistic proposal with a vocation of social commitment.

Under the direction of the Buenos Aires actress and director Marina Wainer, El Sueño y la vigilia raises the curtain on April 9 with a unique performance, as its absolute premiere, at the Guiniguada Theater. The work adapts the text of the Argentine playwright Juan Carlos Gené, founder of the Latin American Center for Theatrical Creation and Research, to illuminate a series of reflections in the gloom of social dialogue that gravitate to old age and youth, death and life, loneliness and love, the transcendent and the eternal, and sexuality in old age.

“I think we all agree that the elderly sector has been especially punished during this pandemic, but it was already a sector that was a bit forgotten, in general, within the framework of society. And I would say that this trend has been reflected in the theater, where there are a large number of texts linked to youth and different strata of society, but where very few directly address issues around the elderly ”, points out Maciel .

“In this sense, we believed that it was an argument that needed to be brought to the theater and, furthermore, Juan Carlos Genet’s text on this issue exudes a beauty that deserved to be on stage in the Canary Islands”, adds the director.

Actress Griselda Ponce in the skin of a retired vedette in an asylum.

The same creators of Atlante Cultura & Teatro, Maciel and Ponce, embody the leading couple of the show, where they play two famous retired artists in a first-rate nursing home. “The plot presents the reunion of an antagonistic couple: one with a totally vital attitude towards life and the other completely defeated and waiting for their time to come”, Maciel advances.

“The message that the work finally transmits is that you have to live life until the last second, in all aspects of life and with all the vitality that we have, without ceasing to make a project or stop thinking about the possibility of doing it. just because you’re an older person ”, he adds. However, the director and actor emphasizes that “this show is not exclusive for the elderly and, precisely, it is also a good message for the youngest, because age is a mental attitude that is far beyond the document: today in day you retire and you are still relatively young, and at the same time, you can be an old man of 30 years ”.

Regarding their multi-tasking as producers, adapters and interpreters, Ponce affirms that “yes, we are involved in all the scrubbing”, he laughs. “And the truth is that we do a good tandem on stage because I always say that it shows a lot on stage when a cast gets along or not,” he says. “I think what is going to become clear is that the cast has a very good relationship and that we are very enthusiastic about the project.”

Likewise, El Sueño y la Vigilia inaugurates the line of social commitment that underpins the Atlante Cultura & Teatro project. “What I like to highlight about this new path that we are embarking on is that our objective, not only for this show, but for the entire repertoire developed by the company, is that what we do is not merely a show, but rather that our bet passes for offering a social contribution around different themes ”, says Maciel. In this sense, this first theatrical production is covered with a parallel program that includes a workshop on breathing and postural repositioning for the elderly, and a round table at the end of the performance. But its commitment is also formative and includes workshops with different interpreters of national and international renown to “collaborate in the training of performing arts professionals on our island.”

Along these lines, since its creation in February 2020, a month before the coronavirus quarantine, the company promoted the production of the Workshops of Excellence with the participation of the English actor and director specializing in Shakespeare Will Keen for the professional sector of the Performing Arts, among others.

Once his theatrical activity resumed, Ponce, who started in the theater in Argentina in 1976 and has developed his career as a theatrical entrepreneur in Gran Canaria since 1997, maintains that the theater circuit in the Canary Islands is in very good health. “I think that luckily, and contrary to what we hear many times, the Canarian theater is in good health in the order that we have great creators, wonderful technicians and very good Canarian dramaturgy, as well as good directors and companies that every time they position more, both at the Canarian and national level ”, affirms Maciel.

The actor Miguel Ángel Maciel in a scene from ‘The dream and the vigil’.

“I always play with the idea that the insular situation, which we often see as a real disadvantage – we do not have the possibility of uploading all the merchandise to a van to do a tour and that differentiates us – is also a a circumstance that forces us to feed ourselves and that makes the sector grow “, he adds, since he claims that” yes, as always, we will continue to need the obligation of the government, which is to support culture. ”

“Unfortunately, in the islands we still cannot do season or we do not have the habit of doing it, with which we are doing isolated functions, with better or worse luck, so we will depend on the greatest possible support from the government, because the companies are already making the greatest possible effort ”, he concludes.

All in all, the horizon that is drawn for Atlante Cultura & Teatro from its debut in the Guiniguada is promising: on April 24 they begin a small tour of The Dream and the Wake in Lanzarote, followed by a stop on the 14th of May in the municipality of Telde, to which are added conversations with different municipalities and future dates in the new theater circuit promoted by the Government of the Canary Islands.

The premiere of El Sueño y la Vigilia will be accompanied by complementary cultural activities, such as a free creative breathing workshop, to be held on Wednesday, April 7, at 3:00 p.m., at the Guiniguada Theater, led by Marina Wainer; and a round table, which will take place on Friday, April 9 in the same venue at the end of the performance, which will be attended by the sociologist and sex educator Raquel López and the psychologist Alejandro Croissier to discuss the issues raised by the play. | NN