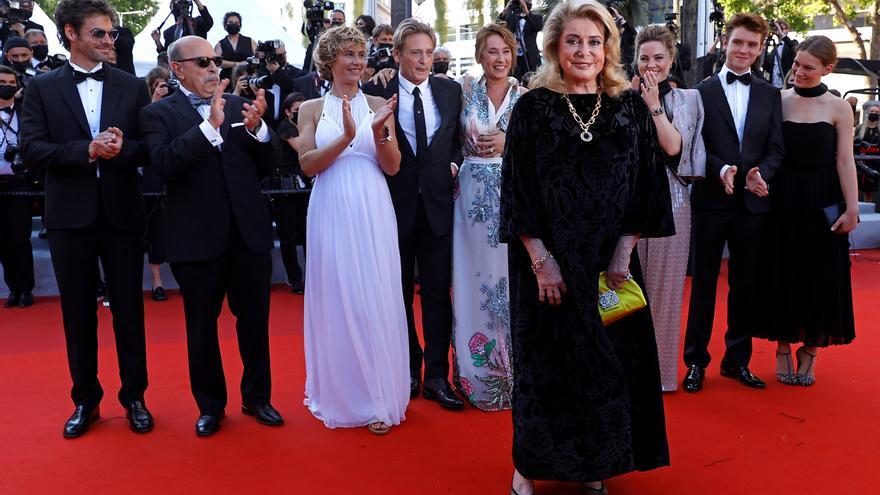 Cannes (France), Jul 10 (EFE) .- The public was waiting for her and she did not disappoint. The French actress Catherine Deneuve had this Saturday at the Cannes Film Festival her great public return a year after having suffered a stroke for which she had to be hospitalized.

The 77-year-old interpreter walked the red carpet as the star of “De son vivant”, a drama by French Emmanuelle Bercot that premieres out of competition and whose filming had to be interrupted for months due to that incident.

“I’m very well,” he said upon arrival at the Palace of Festivals, pointing to his official television channel that he was excited that theaters have been able to reopen in France and that the contest, canceled last year due to the pandemic, was have celebrated.

With her hair down, a black dress and a large golden chain around her neck, Deneuve arrived accompanied by the rest of the protagonists, including Cécile de France and Benoît Magimel.

The actress, received with an ovation in the screening room, is a regular at Cannes, which she first attended in 1964 with Jacques Demy’s “The Umbrellas of Cherbourg”, which won the Palme d’Or.

“Deneuve represents France for me. She is one of the best actresses in the world and one of the freest, bravest and funniest women I know,” said singer and former French first lady Carla Bruni.

“De son vivant” starred this Saturday in a gala screening attended, as usual, by the team from other films in the contest or in the Directors ‘Fortnight and in the Critics’ Week, its parallel and independent sections.

The French Marion Cotillard, who opened Cannes on the 6th with “Annette”, by Leos Carax, monopolized the flashes as producer of the documentary “Bigger than us”, premiered within the Special Sessions and with the focus on the new generation of activists against climate change or other causes.

Adèle Exarchopoulos, who plays a stewardess in “Rien à foutre”, by Emmanuel Marre and Julie Lecoustre, selected by the Week, was another protagonist of the afternoon, as was the Spanish actress Paz Vega.

There was also the French actress and singer Vanessa Paradis, star of “Cette musique ne joue pour personne”, directed by her husband, Samuel Benchetrit, and screened out of competition, in the new Cannes Première section.

That same film was also attended by Valeria Bruni-Tedeschi, Carla’s sister, and who is in Cannes twice this year, also opting for the Palme d’Or for “La fracture”, by Catherine Corsini.