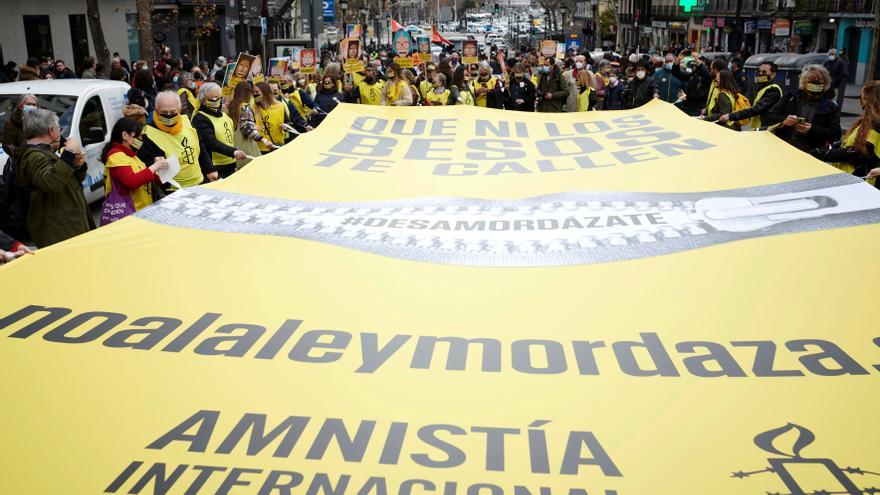 In Madrid, hundreds of demonstrators have claimed this Sunday morning that the reform of the Citizen Security Law, known as the Gag Law, is not "lukewarm" and that it guarantees the free exercise of fundamental rights, because they do not want "or Gag Law, or make-up gag", as was read on the banner that led the march.

"They call it democracy and it is not, a dictatorship is what it is", or "freedom of expression and demonstration" are some of the slogans that the demonstrators have chanted, while they went to Puerta del Sol from Atocha, where they started the protest.

The paper meets on Tuesday

These demonstrations take place two days before the parliamentary paper in charge of modifying the Citizen Security Law resumes its work next Tuesday, with the debate on the most controversial changes, such as hot returns or the use of anti-riot material.

The citizen platform No Somos Delito, together with groups, organizations and social movements, demands with these mobilizations that the reform of the Gag Law is not "a makeup of the current law".

In statements to journalists, the representative of Amnesty International Carlos Escaño recalled that the majority of Congress promised at the time "to reverse the setback in rights and freedoms" caused by the law. However, what is now being debated in the Chamber are nothing more than "small changes" and "insufficient", which is why the conveners of 130 demonstrations in 25 Spanish cities want to remind the parliamentary groups that "they are not aligning themselves with the international human rights standards," Escaño stressed.

Meanwhile, Javier García Raboso, from Greenpeace, has insisted on the need to repeal a law that "should never have seen the light of day" and achieve a new norm that "really guarantees the rights and freedoms of a mature democracy." "We advocate complete repeal, because the current reform proposal is extremely lukewarm."