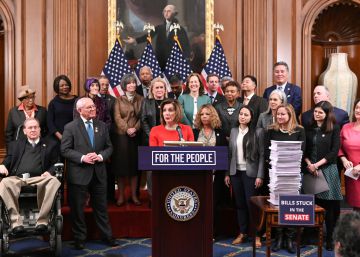 The vote last Wednesday in favor of the dismissal of Donald Trump It was neither a surprise nor a turning point. We knew for weeks that the House of Representatives would vote in favor of impeachment We also know, with the certainty that something in politics can be known, that the Republican-controlled Senate will not condemn Trump or expel him from office; You may not even pretend to look at the evidence. So it would be easy to be skeptical about all this.

But that is not the feeling he has given. For me, and certainly for millions of compatriots, Wednesday was a very emotional day, a day of despair and hope at the same time. The reasons for despair are obvious. We could easily lose everything that the United States supposedly represents. The place where freedom was born could well be a few months after abandoning all its ideals.

But there were also reasons for hope. It turns out that the enemies of freedom are as shameless and corrupt in the United States as in other countries, from Hungary to Turkey, in which democracy has in fact collapsed. But the defenders of American democracy seem more united and determined than their counterparts in other countries. The big question is whether that difference – that true American exceptionality – will be enough to save us.

The enemies of freedom in the US are as corrupt as in other countries, from Hungary to Turkey

Let's go back a little and ask ourselves what have we learned about the United States in the last three years. There has never been any doubt that Trump would abuse his power; From the beginning, he telegraphed his contempt for the law system, his eagerness to exploit the position for his personal benefit. However, for a while, it was possible to imagine that at least part of his party would defend democratic principles. But it was not like that. What we have seen since Wednesday is a parade of sycophants that compared their leader with Jesus Christ while spitting discredited conspiracy theories coming directly from the Kremlin. And while they did, the object of their adoration gave an endless and disjointed speech, typical of a third-world dictator and full of lies, which oscillated between grandiosity and self-pity, with complaints interspersed about the number of times you have to press the button of the cistern.

Republicans, in other words, are irredeemable; They have become another authoritarian party, enshrined at the beginning of the leader. And like other similar parties in other countries, the US Republican Party tries to rig the future elections by manipulating electoral districts and suppressing voters, creating permanent control of power.

But although Trump's supporters resemble their counterparts in failed democracies, opposition members do not resemble anything. One of the depressing aspects of the rise of authoritarian parties such as the Hungarian Fidesz and the Polish Law and Justice has been the ineffectiveness of the opposition, disjointed, disorganized and unable to present a real challenge even against unpopular autocrats who consolidated their power. However, trumpism has faced from the beginning a determined, unity and effective opposition, which has been reflected both in the mass demonstrations and in the electoral victories of the Democrats. In 2017 there were only 15 Democratic governors, compared to 35 Republicans; today, the difference is 24 to 26. And last year, of course, the Democrats won a sweeping victory in the House of Representatives elections, which is what made the hearing possible and the vote in favor of impeachment.

Republicans try to rig the election with the manipulation of constituencies

Many of the new Democratic congressmen represent districts of Republican tendency, and some observers hoped that a significant number of them would desert on Wednesday. Conversely, The match remained almost completely united. True, so did his rivals; but while the Republicans sounded, well, unhinged in their defense of Trump, the Democrats seemed sober and serious, determined to fulfill their constitutional duty even if it involved political risks.

Now none of this necessarily means that democracy will survive. Although they have lost elections, Republicans have been consolidating their control over the courts and other national institutions. The Democratic leaders of Congress have been unexpectedly, even surprisingly, impressive; the Democratic presidential camp, not so much.

And the unity of purpose we saw on Wednesday may not be sustained next November. If the Democrats choose a progressive candidate, such as Elizabeth Warren or Bernie Sanders, will the rich Democrats decide that defending democracy is less important than low taxes for them? If the party names a moderate as Joe Biden, will some Sanders defenders express their frustration as they did in 2016, staying at home or voting for a third party candidate? Given what we play, I would like to rule out these concerns, but I don't get it.

If we add to that the degree to which next year's elections will be rigged in favor of Trump, both by suppressing voters and by the bias introduced by the Electoral College, and the even greater bias created by a Senate map that gives to small, mainly conservative states, as much representation as to progressive states with much more population, it is perfectly possible that trumpism will triumph in spite of everything.

However, what we learned on Wednesday is that those who define the United States by its ideals, not by the dominance of an ethnic group, will not give up easily. The bad news is that our villains are as villains as everyone else's. The good news is that our good ones seem unusually determined to do the right thing.