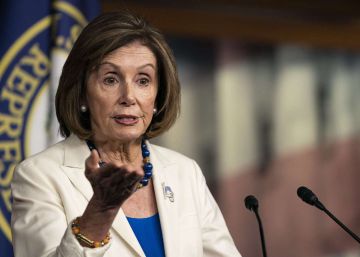 The withdrawal of the US Paris Agreement, that Donald Trump started processing at the beginning of the month and will last almost a year, supposes a hard blow for that pact. But, on the one hand, no other country has started the same path. And, as the Minister for Ecological Transition recalled on Tuesday, Teresa RiberaTrump does not even have the support of the "whole of his society." There are many states, mayors and companies within your country that remain committed to the climate pact. In addition, the Democrats give clear signs of wanting to be inside the Paris Agreement.

The commitment of the Democrats is such that, according to La Moncloa sources, veteran politician Nancy Pelosi, president of the US House of Representatives and third authority of this country, will attend the Madrid meeting. In addition, more members of the United States Congress are expected to participate, which will intervene during the summit, which starts on December 2 and ends on 13 if negotiations go well.

At this international event, which is held under the umbrella of the UN and that was originally planned to take place in Chile, a significant number of heads of state are expected to attend. The complete list is still closing, but the forecast is that a broad representation of leaders from European countries will arrive. And also of the new European Commission, which takes possession on December 1, with its president, Ursula von der Leyen, at the head, according to the government sources consulted.

The end of the Madrid summit will coincide with the European Council in which, in principle, it is expected that the Twenty-eight will approve the goal of the end of greenhouse gas emissions in the EU by 2050. That agreement It was tried to close in June, but it failed because of the opposition of some countries, led by Poland. And the Twenty-eight were set for this December.

But one of the most impactful visits will be that of Pelosi because he will arrive in Spain during a few days of high tension in the United States for the open process against Trump in Congress for a possible impeachment or impeachment of the president. There is no official calendar for this procedure, but, if the informal one is met, the Madrid summit will take place during the days when the case is discussed in the Justice Committee of the House of Representatives, after a final vote in plenary .

The representation of the US delegation by Pelosi constitutes an important political message. The veteran Californian Democrat is a heavyweight of the Democratic Party and a scourge for the Trump presidency, to which has folded his arm in important matters as the battle for the financing of the wall on the Mexican border or has put in the eaves with him impeachment, in addition to his acquaintance ability to drive him out of his mind.

Trump has broken the commitments of the United States with the Paris Agreement, but the fracture is not effective until November of next year, according to the rules of the pact itself, which leaves the final lock just after the presidential elections. That is, a Trump defeat at the polls could change the strategy of the most powerful country in the world, as the Democrats make it clear that they do want to keep the United States at the head of this battle. In fact, a Democrat, Barack Obama, was one of the main architects of the Paris Agreement, which closed in 2015, his last year in office.