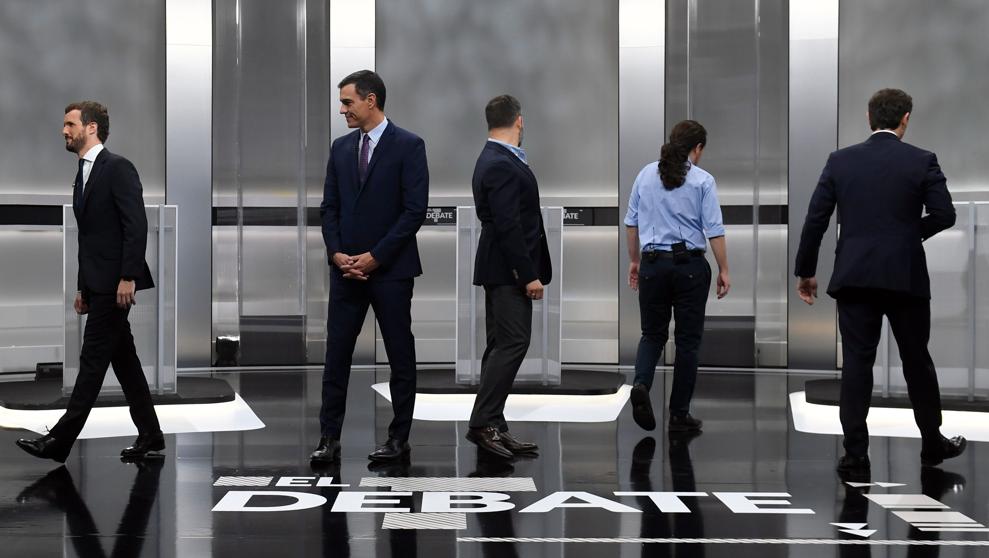 Only two boyfriends were missing, some trunks under his feet and seven sisters. Five were. Five are. Three, four will remain. So the end of the world (as we had known it) was this? Not an alien invasion, not a Tanhausser Gate on fire, not a zombie epidemic? The end times were Five Brothers-in-law standing on the screen of your TV? Overtake that, Stephen King.

And you didn't want to vote but you must go. Again. Something similar to when, as a child, you didn't want to go to class because there was an exam and it was obvious that you would suspend it. And your mother forced you. They were coercive mothers. Some, much. They did not bring you fresh cokes or condoms at the concentrations, but at the slightest opportunity they threw you sneakers, sayings and heteropatriarchal frustration without any protocol. And yes, it forced you to go to that exam and you were still knowing that nothing good was going to come out of there. Just something bad and poor, very poor. The absolute disaster. If doing something you will be worse, why do it? But let's vote, let's vote in these elections. Others more. Elections that don't cool like that party you know you don't have to go to and you go. Like the ex you don't have to phone and phone. Like that nth gin and tonic you don't have to ask and ask. We are not talking about temptation, but about immolation. Something that will make you feel bad. Of something terrible. The horror, yes, the horror. Democracy as a form of torture. If they don't know what to invent anymore.

Of the five (Altito, Barbitas, Cobble, Pigtails Y Brutus) Three did not want elections ten days ago and now there are four who would sacrifice anything – especially their advisors – to avoid them. Only Brutus wants democracy. Brutus is not even believed to have been given a second chance. Fortunately in the next candidate debate, Ursa-Vox He demonstrated the level of training he represents. You watched and listened and remembered old series of the Earth's alien conquest and – to refresh your memory – you set out to watch Superman 2 to reassure you by seeing how they end up Ursa, No N and the general Zod. If there are four out of five candidates who would do anything to bring time back to September, June, April, why do we find our finger by pressing the red button? Cobblestone does nothing looked like president of government, Barbitas could shave every morning, Altito had not met Ivan
Round, and Coletas had an imberbe friend with whom to storm the skies. If most of the population does not want to vote because voting is to suspend the exam and the bad guys win (that is, almost anyone), why should we vote? Because we have no idea what it means worse in the direction of something as complex as a society, a community, a plurinational country (oops, what I said). Imagine sinking into a pool and thinking that, when you reach the bottom, you will give yourself a boost up and you can finally breathe. Now imagine that the pool has no bottom. Already…? Well, a country, in its fall, never has a bottom. Catalunya, either.

In the nonsense of the campaign we have had, of course, everything and with new characters. The
Gang
Scooby Doo at Congress, so naughty they, with that particular sense of humor that consists of laughing at the things that make others serious, but don't think of joking about a butifarrada Vegan or the menstrual cup. Or the negative selection reaching the commands as verified in the declaration of some CDR in the Audience. Gandalf Y Lisa, For the love of God, Gandalf and Lisa … Lisa remembers one of those multi-instrumentalists who had Prince in his band of the eighties, and Gandalf … I don't see Gandalf due to the lack of response from the forest of ents, saying "Quins collons!". How about a very good nod to the Belgian and British comics with a view to the Euroorders? How are you Gargamel Y Wally… It’s cool that character out of Matrix entering and leaving reality and of Vic as the candidate of PP by Barcelona. A princess brothers Grimm speaking in a superb Catalan and sowing doubts in you tie and tough CDR with coverage TV3: two burning combs of container and foaming thugs on lords in suits that have been lost in the transshipment. We also met the puppy Luke and the smell of milk (something that porn always stole from us). From teddy bear gifts to Elvis in 57 nothing had looked the same. I am looking forward to the DVD meetings of the orange advisors with Adoquín, a brother-in-law whom one foresaw and with a sense of disproportion. That moment when his advisors bring him a ham t-shirt, a piece of cement or a puppy. Does the end of the world have to bring this feeling to astracanada? There was nothing better? Really? The aforementioned negative selection makes you wonder if the need for transparency and harassment in networks is not the worst thing that has happened to this society since the decision of Fred Trump and Mary Anne MacLeod To have a fourth child. Bringing people so clumsy and untalented to top lists, preside over institutions and manage your life leads us to think that perhaps an intelligent politician and (a little) distracted with the return of money knows how to carry your own better than a sectarian, a gray suit or A puppy that smells like milk. Longing for professional and corrupt politicians, Rajoy how Churchill and register in Gipuzkoa and vote for the Lord who still looks like your sister's husband and not a brother-in-law. If we add to that our differential nihilism of P-3 and weekend, buffet type free of ideologies, flaws and boring booze, we have a tremendous menu with a difficult and heavy digestion, which we will not be able to avoid suffering. Spain ungovernable, inconsequential Catalonia, Barcelona crippled