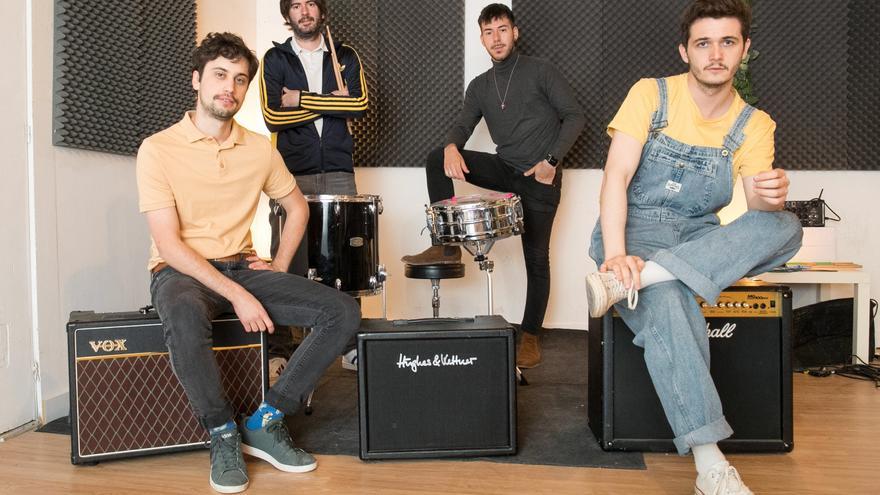 Zaragoza, May 2 (EFE) .- The Zaragoza group Delacueva has recently released its first album and, according to the group’s leader, Manuel de la Cueva, in an interview with Efe, its current objective is to make itself known in Spain, but when they manage to consolidate at the national level, “the next step is Latin America.”

It was after winning the Ambar Z Music contest in 2018 that the Zaragoza City Council offered them the possibility of recording this album at the Audiovisual Laboratory of the Zaragoza History Center.

An album that was ready to be presented in March 2020, but due to the covid-19 pandemic they had to change their strategy and during these months they have released some singles until the recent release of the full album.

“Delacueva” is an album that mixes different musical genres, ranging from pop to funk through Latin rhythms and with nods to the English language.

This mix of genres is given, according to Pérez, by the different influences and tastes of each of the components and by the idea of ​​finding “their own style” that defines them. “In the end it is what costs more in a group,” he adds.

Regarding the lyrics of the songs, De la Cueva explains that it is the last thing he always writes, because it is the most complicated for him and he seeks inspiration in reading.

This first album is inspired by the stories of Julio Cortázar. De la Cueva confesses that he was reading the book “Historias de cronopios y de famas” while he was composing the songs for this first album, and from there he got some ideas.

Choosing between the songs on this first album is difficult for them but Gastelumendi is clear about it since for him “I will love” is his favorite; although, as he says, at the narrative level it is the one that contains the least text and at the harmonic level it only has two chords.

“It seems to me that it is taking something that is super powerful out of simplicity,” adds Gastelumendi.

The song that took the longest to make was “Winter in the Bahamas”, since, according to the people of Zaragoza, it was a very long process and at first they composed this song in English. “Bahamas has been eight songs,” adds Simon.

When creating this first album, Pérez says that after a year working on it, it was in the last few months that it suffered “a total turnaround”.

Other artists from Zaragoza have collaborated in “Delacueva”, such as Erin Memento, with whom they interpret “Miente”, and Matafuego Club in “I would like to bite you”.

It was in an interview with Jordi Évole that the director of the Center for the Coordination of Health Alerts and Emergencies of the Ministry of Health, Fernando Simón, made reference to this group from Zaragoza in which one of the components, Pedro, is his nephew.

“It was a boom in followers,” says Simón. “It is appreciated, he extended a hand to us and is reflected in listeners and followers”, which has helped them to take the step to get to know them more nationally.

Pérez confesses that for some members of the group this fact was also a surprise, since, except for Manuel de la Cueva, none of them knew about this family relationship until the television program was broadcast.

Although the presentation of the album will start in Zaragoza on May 17, at the Teatro Principal, they already have closed concerts in other Spanish cities such as Huesca, Madrid, Valladolid, Salamanca, Logroño or Valencia.