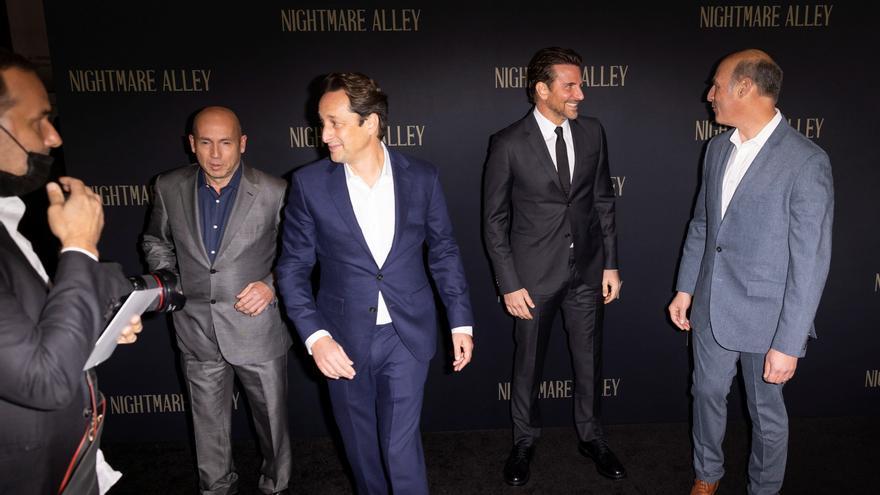 It has taken almost two years to complete, but Guillermo del Toro's new project, 'Nightmare Alley', was finally presented this Wednesday for the first time to the public at its absolute premiere in New York, which was attended not only by the Mexican filmmaker, but by some of the leading actors, including Bradley Cooper. The event, held in the Alice Tully Auditorium of the iconic Lincoln Center, was the first opportunity to see the long-awaited headband before it hits theaters on December 17, but only a lucky few made it, including Cooper's famous model and ex-partner, Irina Shayk.

Del toroDressed in a classic tuxedo, he barely had a chance to speak to the press, suffering from knee pain, and walked briefly on the black, not red, carpet. Black, perhaps, as a nod to the feature film genre, a psychological thriller inspired by the 'film noir' so popular in Hollywood between the 20s and 50s, and to which the director wanted to pay tribute with an extremely careful classic aesthetic.

"We need more films of this genre," actor David Strathairn, known for his work in the Oscar-winning 'Nomadland' (2020) or Steven Spielberg's 'Lincoln' (2012), told EFE. "More films that provide an extraordinary visual experience, that transport you to another place, but at the same time cling to the humanity of people," said Starthairn, who admitted that working with Del Toro on the film it was "a pleasure, to put it mildly."

The feature film, like many others, was affected by the coronavirus pandemic, and its filming had to be suspended For six months, something that Del Toro has told specialized media allowed him to delve deeper into the concept of the film. 'Nightmare Alley', an adaptation of a novel of the same name written in 1946 by William Lindsay Greshan, is somewhat different from the tapes that the Mexican filmmaker is accustomed to, without the fantastic beasts or the magical elements that star in some of his most celebrated creations, such as 'The shape of water' (2017) or 'Pan's labyrinth' (2006). But he does delve into the world of clairvoyance in his plot, in which the central character, Stanton Carlisle (Bradley Cooper), an ambitious showman who strikes up a friendship with a clairvoyant -Cate blanchett- discovers his talent for dupe, which leads him to travel to New York with the aim of emptying the pockets of the wealthiest in the city. Besides Cooper and BlanchettDel Toro has featured an illustrious cast of actors in the film, including Rooney Mara, Toni Collette, Willem Dafoe, Richard Jenkins, Tim Blake Nelson and Holt McCallany.

Despite being the world premiere, neither the veteran Blanchett and Collette nor the young Mara, whose name already sounds like one of the main candidates to win the Oscar for best actress in March 2022, and neither did Dafoe. The actors who were there lavished praises to Del Toro, to your imagination and your originality. "He is unique, a director who has a particular vision, with his own style and who has his own way of approaching the process. And that is the reason why his films have no equal," explained Holt McCallany, another. of the actors who participates in 'Nightmare Alley' and who said that he agreed to be part of the project "immediately".

McCallany also opined that this film is different from the rest of Del Toro's feature films because "it depends a lot on the performance of the actors and the script." "The cinematography is beautiful, but it is a film that would not have performed well had it not been for the extraordinary actors, led by Bradley Cooper and Cate Blanchett, who are probably one of the best actors working in the world of cinema today, "he settled.