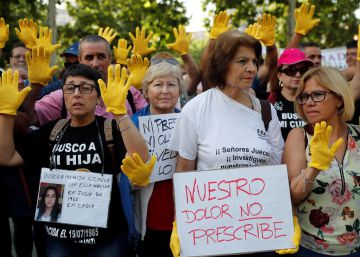 The court of the Provincial Court of Madrid has postponed this Friday for the second time the trial for the theft of the son of Adelina Ibáñez for the absence of Joaquín Botija Botija, andl gynecologist of the Santa Cristina Clinic accused of the baby subtraction in 1975, which alleges "medical problems." Ibáñez denounced the disappearance of his son as soon as he was born, in October 1975, and in 2013 he took the case to court. The complainant toHe also accused the Nun Sister Maria, who died that same year, of abducting her little one for having been the result of "sin." The baby was born out of wedlock.

The doctor's defense, which faces eight years in jail, has argued that his client "is undergoing treatment for which he cannot postpone the sessions." "It's a matter of life or death," he added. However, neither the defense, nor the court, nor the coroner himself knows the pathology suffered by the accused. "It is to preserve the protection of my client's data, your honor," said the lawyer. Given these allegations, the president of the court commented: "What the defense has done is unpresentable."

Adelina gave birth to her son Bruno on October 27, 1975 at the Santa Cristina Hospital in Madrid. FShe was assisted by the nun María Gómez Valbuena, known as Sr. María. After giving birth, they told him that he had died, and they showed him a baby that she claims was a doll. He asked to be approached and prevented. "When he was born, I touched his back and his head. I didn't hear him cry Because I'm deaf But I touched him and they told me that what I had had was placenta previa and that is why they anesthetized me. Who is anesthetized with a child already between the legs?", he said at the exit of the view.

The coroner in charge of analyzing the defendant's medical documentation has stressed that it consists of "intelligible" and "fuzzy" parties. And that in the documents coming from the Onco-hematological section of the Hospital de la Paz, the last name of the accused is barely distinguished. "This is not a medical report," he said. Guillermo Peña, lawyer of the private prosecution, regrets the "dilatory maneuver" of the accused. "We only hope that the trial will be held. After 44 years, nobody knows how to explain where Adelina's son is."

A few minutes from the view, Ibáñez, who has attended in a wheelchair, commented to his daughter: "If you let me talk, I would tell you if that man is sick … [pointing to the oxygen bottle that brings] and I'm also in a wheelchair. But here I am. "

Who has attended the trial is José Zamarriego, director of the Santa Cristina clinic, also charged in the case of the theft of the daughters of Betegón purification, not yet judged. Upon leaving the audience, a group of about 20 people from the Association of Seville Stolen Babies and SOS Stolen Babies They have booed him for several minutes. At the shout of "Where are our children?", The protesters have rebuked him and demanded that he take responsibility.

Minutes later Ibanez appeared, with oxygen connected and walking. "It is up to Santa Cristina to look for my Bruno. To look for him by land, sea and air. Because I can no longer," he said, with a deep breath and his eyes on the interlocutor. "I have never been anonymous. I have history. The day I gave birth called me Adelina, my son weighed three kilos and 200 grams and my son named him Victor Manuel. Who gives that name to my son? Was everything prepared for him? "

Botija, 74, will be the second doctor tried in Spain for a case of stolen babies after process to doctor Eduardo Vela, who was acquitted for the prescription of the crime despite the fact that the Madrid Court considered him responsible for the abduction of Inés Madrigal in 1969. Shortly after, Madrigal herself informed the Prosecutor's Office that she had found her biological family thanks to a bank of DNA and that it had told him that it had been voluntarily given for adoption.