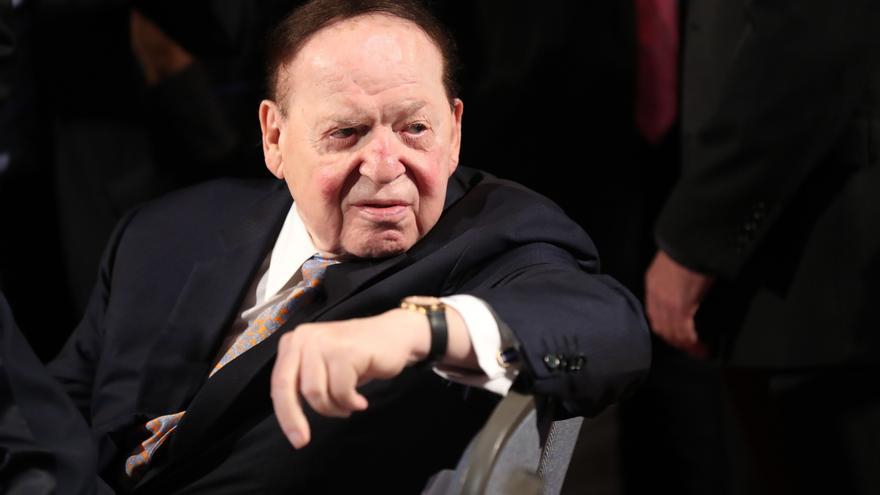 An old man with sunglasses in the middle of a clearing in Alcorcón. If any Spaniard remembers Sheldon Adelson, that is probably the image in his head, that of the promoter of Eurovegas. That of an American millionaire surrounded by very smiling politicians, inspecting land to build in Madrid a replica of the city where he made his fortune with casinos. Sheldon Adelson, who died today at the age of 87, never built Eurovegas, but he has been one of the fundamental figures in understanding the Republican Party that has ruled the United States for much of the past decades.

During the last Republican primaries in 2016, the different candidates were parading by your Las Vegas casino to seek your blessing. They did not do it to enjoy their hotel, which is a miniature copy of Venice with gondolas and canals, but because they knew that in the previous elections more than 75 million euros had been spent in supporting the Republican candidates. Trump was not his first choice then, but he ended up being your main funder with more than 20 million euros. He rewarded him with a privileged seat in his inauguration and with something else.

The day the US inaugurated its embassy in Jerusalem, the millionaire was sitting in the front row a few meters from Prime Minister Netanyahu. Trump had broken the decades-long consensus on US foreign policy and moved the embassy to the holy city, thereby recognizing Israeli sovereignty and enraging the Palestinians. Adelson, who was Jewish and very attached to Israel, had even volunteered to pay part of the expenses out of pocket. Two years later was bought what had been the ambassador’s residence in Tel Aviv.

Although his contempt for the Palestinians was known (“an invented town “) It is still striking that the son of a very humble immigrant spent so much money promoting the careers of some of the most conservative politicians in the United States. Adelson himself has explained that he grew up in a deeply democratic family and that he himself was, but that changed horse sensing a “visceral anti-Israel movement” in the party. Others believe, however, that his ideological shift had more to do with the journey from a Boston taxi driver’s one-room home, where he was born, to his fortune current value of 30,000 million euros.

Some of his big fights with the Democratic Party have had to do precisely with his business practices, in particular his hatred of unions. He has fought them in court to prevent them from even manifesting on the sidewalk in front of their hotels. In the year 2008 declared that Islamic fundamentalist terrorism was the biggest threat to the country … along with a bill that wanted to make it easier for workers to join a union. His obsession with the matter has reached such heights that, when a Las Vegas synagogue hosted an act that could not be held in its casino due to a union boycott, it withdrew him to the temple a donation of more than 200,000 euros to which he had committed himself.

The failure of his Spanish adventure, Eurovegas, also had something of that. Adelson wanted tailored benefits to circumvent labor and urban legislation, pay less taxes and even be able to skip the anti-smoking law and that you could smoke inside your casino. The Rajoy government refused to some of these perks and to Adelson’s demand that the state compensate him if a new executive or the courts curtailed those privileges in the future. Adelson then retired, looking for other places to do business. The pandemic had hit him financially in recent months, but he was already beginning to recover when the cancer ended his life. Both Israel and the Republican Party are left without some of their best supporters.