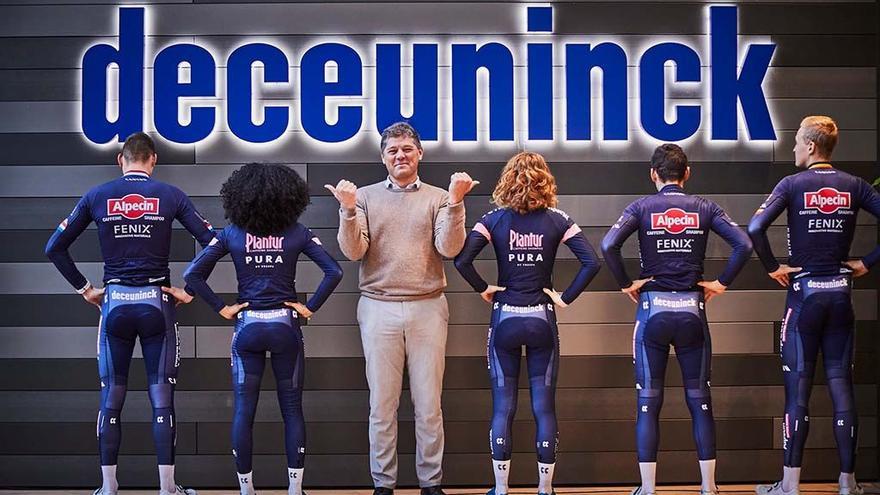 The news, a real bomb in the world of cycling, especially in the sensitive and passionate Belgian professional environment, jumped on Wednesday. Deceuninck, the manufacturer of PVC windows, announced a contract for sponsorship with the team Alpecin-Fenix, whose biggest star is the Dutch Mathieu Van der Poel.

The event would not have any major packaging if it were not for the fact that Deceuninck had been the main sponsor of the team for the last three years, which from 2022 will be called Quick Step-Alpha Vinyl. And because in professional cycling the transfer of sponsors is not very well seen, even less, it is worth insisting, in Belgium, where cycling and its teams are a matter of State.

It is not the first time that something like this has happened, even in the country itself, although the connotations are now different. Much remembered is the case of the pharmaceutical Omega Pharma. This Belgian company, absorbed in 2014 by the multinational Perrigo, was introduced to cycling sponsorship in 2005, through the team Lotto, one of the classics of Belgium.

In the following six years, he lent his name to this team with different trademarks of his products (Predictor, Davitamon and Silence) and later as Omega Pharma. Until in 2012 it was announced that the pharmaceutical company was leaving the Lotto sponsorship to sign a new three-year agreement with Quick Step, its staunch rival for two decades, causing a commotion in the cycling world.

Deceuninck’s case is noticeably different. The window company appeared at the end of 2018, at the last minute, to save Quick Step from Patrick Lefevere, perhaps the most iconic manager in world cycling. The squad had lost sponsors in previous years, amid a global crisis for teams, and threatened to lower the blind if a new company did not come to the rescue.

Lefevere reached a good agreement with Deceuninck and although he was losing references in this triennium (Viviani, Terpstra, Jungels, Gaviria, Mas, Gilbert…) maintained a strength that allowed it to continue being during the three courses the team with the most professional victories of the entire peloton, with quite a difference over the rest, specialized as it is in sprints and classics.

It has been months since Deceuninck resigned to continue as nominal sponsor of the Belgian team and seemed to be heading his way out of professional cycling. And then came the news of their agreement with Alpecin-Fenix ​​to have their brand appear on the culotte for the next four years, a longer deal than he had signed with Lefevere in 2018.

The evolution of the Alpecin

The Alpecin-Fenix ​​was until recently a rather small team, second row, but the emergence of Van der Poel in road cycling has given him a place among the most thriving squads in the world. He’s in the second division, yes, but just because you want, given that the convoluted UCI regulations allow you to freely choose the races you want to run if you are the best team in the category at the end of the course. And he has been doing it for two years with great sufficiency.

With Van der Poel himself as a stiletto (22 wins in the last three seasons) and the support of the sprinters Tim merlier and Jasper philipsen (18 wins between them this course) has become the great local rival of Deceuninck, displacing Lotto, a squad in the doldrums in recent years due to drastic budget reductions.

What explains this change of side of Deceuninck? “Our investment is now lower, but the space in the shorts was also available in the Quick Step. What happens is that, as a modern company, we want to participate in women’s cycling. We talk to them, but Patrick is Patrick … “, explained the CEO of the company, Francis Van Eeckhout, to the Belgian newspaper Nieuwsblad.

Patrick is Patrick … The Deceuninck executive refers to Lefevere’s refusal to make the leap to women’s cycling that has already been done by several of the main teams in the world peloton, such as himself Movistar, in addition to Jumbo, Bike Exchange, DSM, FDJ and Trek.

“Form a women’s team? I am not a social club“replied the Quick Step manager when asked a few months ago about this possibility, in a statement that, of course, raised blisters.” We will do it when there are enough good riders in Belgium, unfortunately now there are not. I don’t have the experience, the time, the money and the desire to invest if I don’t know where I’m going to end up, “he added.

This frontal rejection to bet on a female squad ended up deciding the balance of Deceuninck, who opted to break ties with Lefevere despite the fact that he had such media figures to sell his brand as the double and current world champion, Julian Alaphilippe, the last winner of the Tour of Flanders, Kasper asgreen, and the one who is the biggest fledgling star of the world peloton, Remco Evenepoel.

Everything is said, the Alpecin-Fenix ​​does not have a women’s road team at the moment, but it already has women in its cyclo-cross and mountain bike squads, given that it is a multidisciplinary squad, and its medium-term plans will soon give way. the jump to the highway. “Supporting young talents and promoting women’s cycling are two values ​​that we both cherish,” said the Deceuninck executive after announcing the agreement. Meanwhile, Lefevere, from home, disagrees. He misses it.