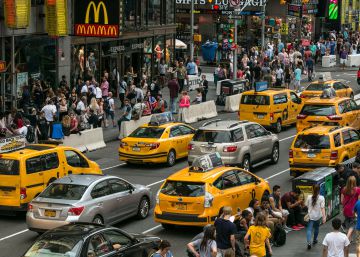 Mohammad Mahbu wants back the life he had in Bangladesh. The taxi driver makes his way with agility among the traffic that congestes the avenues of New York. He does it with the experience of taking two decades behind the wheel. But his dream was trapped five years ago in a traffic jam he sees no way out. He owes $ 650,000 for a medallion, the permit that entitles you to operate a yellow taxi. More and more people like him have the burden they endure.

It is estimated that in New York there are about 6,000 independent taxi drivers like Mahbu with a medallion. The average debt is half a million dollars. Some 950 have already declared bankruptcy. These permits reached be considered a more profitable investment than a flat in Manhattan. "He was an official with a big dream," he recalls during a protest on the steps of the City Hall, recalling his life in Bangladesh. "Now I am a beggar."

Work as many hours as you can to stay afloat, such as Hakan Humusoglu or Vinod Malhotra. They comment that it is very difficult to reach the end of the month having to pay the letters of the loans. Anxiety is evident when they talk about their financial future. "Everything that goes through its tachymeters," says Bhairavi Desai of the New York Taxi Workers Alliance, "goes straight to pay debts, to the car and to insurance."

At the epicenter of the crisis are the predatory practices followed by the entities that provided them with loans and intermediaries. The New York Times published in May an investigation that revealed how the city and regulators were complicit in allowing the value of the medallions at auctions. For one of these permits, almost one million were paid in 2014.

That was before alternative services like Uber changed the rules of the game and flooded the streets with their black cars. The city approved these permits and benefited from their sale. Mahbu could have auctioned his own, but it wouldn't solve a third of the problem. With luck I would transfer it for $ 175,000. It is the price that was paid 15 years ago.

Many of these taxi drivers live in Queens and the Bronx, neighborhoods represented by the progressive Alexandria Ocasio-Cortez. During a congressional hearing he charged against the predatory practices that led thousands of taxi drivers to ruin. "They are ordinary people," he said, "most immigrants trying to start a life." He described the behavior of criminal lenders and defended the rescue of those affected. "Regulators knew it," he says, "the city knew it."

Nicolae Hent, another taxi driver, hopes that this crisis will force the city to "solve the problem they have created." He owes $ 120,000. Although he is not seen as desperate as other colleagues, he knew Nicanor Ochisor, one of the taxi drivers who killed himself. They say that everything was going well until the emergence of Uber. From that moment, says Mouhamadou Aliyu, the business "became more difficult every day."

It was the death of Douglas Schifter that began to highlight the emotional and financial difficulties of taxi professionals. It happened in February 2018. He killed himself at the gates of the City Hall. In a note on social networks, he explained that the streets of New York are plagued by drivers "desperate to feed their families" and accused Uber of forcing them to operate at low cost. "I will not be a slave who works by calderilla."

"They are paving the streets with their blood, their sweat and their tears," Desai insists. The Taxi and Limousine Commission, the agency that regulates the business, denies any fault. "The main responsible parties are banks and credit unions," they insist. But the agency did nothing to prevent the speculative bubble. Between 2002 and 2013, with Michael Bloomberg as mayor, 1,260 permits were auctioned. The maximum price paid was $ 524,000.

With Bill de Blasio, 200 permits were offered in 2014. The highest was paid at $ 965,000. The pressure is increasing for the Democratic governor. He has just presented a series of recommendations to begin to stop abuses in the industry and alleviate the financial situation of those affected. But it fell short. Councilman Mark Levine now leads a legislative initiative to rescue those affected by these abuses.

The idea is that the city acquires the loans at a discount to be able to refinance them in better conditions, "we have a moral debt to these drivers who have suffered the consequences of a crisis that we have helped create." The mayor rejects the idea of ​​rescue and estimates that a direct financial intervention will cost the city 13,000 million.

De Blasio canceled the sales of medallions with the irruption of Uber. Not a single auction was held since the price crash began in 2015. “We have tried many things to help taxi drivers,” he says, citing the limit that was imposed last year on cars that can operate under the new platforms and the minimum guaranteed salary for drivers.

"You have to be realistic," De Blasio insists, "we don't have that money." The New York Taxi Workers Alliance rates the ransom figure as exaggerated and cuts it to between 1,800 and 2,700 million. "He is not sorry to say that it is impossible," Levine disagrees, pointing to everything that was done during the financial crisis, when the float was thrown at the big banks. "Drivers have the right to live with dignity and a future without poverty," says Desai,