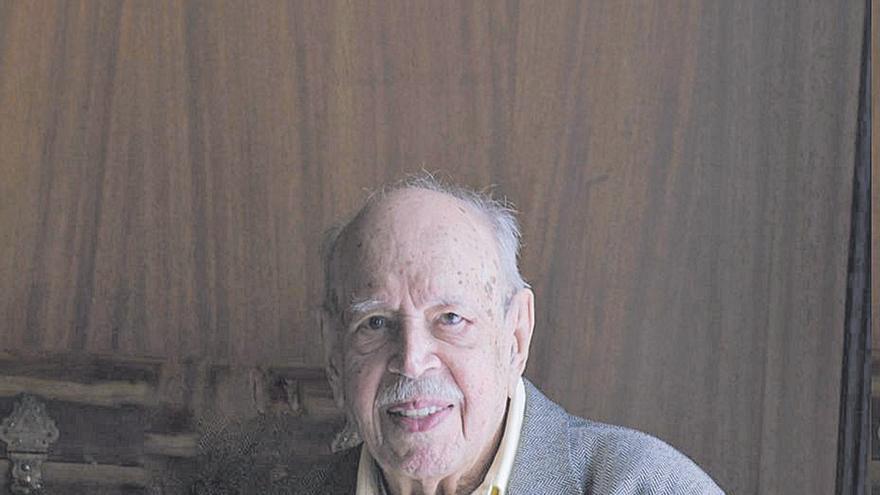 And it is that a while of chatting with Don Paco means discovering a particular way of facing life. Enjoy it day by day. Without fear of what may happen. “My future is tomorrow, with my age I no longer have a future and that is why I only think about living up to the day and in the best way I can,” says García, even more emphatic in a somewhat more detailed argument. “Do you want me to stay at home, sitting and prostrate, until my time comes? I am not one of those people. As long as I have rope I will continue, and when I run out, well it’s over … But not sitting down, ”he points out firmly.

Don Paco has precisely one of the great detractors of this philosophy of life in his own family. A very opposite view not without a certain logic, since Francisco suffered a heart attack just a few months ago. But he turns a deaf ear. In a figurative way … and not so figuratively: “I have a lot of ears, but little hearing, in telephone interviews I don’t find out anything.” In the face to face it is already different. “I thank the cardiologist who intervened because thanks to him I am here, but I am not going to stay still. My daughter says, ‘What if you have a heart attack while you’re swimming?’ Well, it gave me and I died, that’s it; You have to die of something, ”says García with a great deal of sarcasm. The same happens with the Covid-19 vaccine. “They don’t want me to wear it, but don’t I do it every year against the flu?”

That familiar tug of war had its penultimate episode just a little over a week ago. The day Don Paco set the national records at the Acidalio Lorenzo Pool. “When I went swimming in this last competition I had to do it secretly from the family. I left the house without saying anything to them ”, he relates as if it were a childish mischief. The why, with his explanation, seems irrefutable: “If I tell you before I get a fever with which I cannot go swimming.” Of course, García admits that later, “when they found out from the newspaper, they got angry.” “My daughter didn’t even speak to me,” she acknowledges.

It is precisely because of his daughters, “who married two chicharreros”, that Don Paco arrived in Tenerife “22 years ago”, when he became a widower. “Later, when they opened the pool at El Polvorín de Taco, which is close to home,” began his stronger relationship with the pool. “Although since I can remember I remember being soaked every day in Las Canteras, since I grew up just a few meters away, in La Isleta,” he recalls. “Then, a colleague suggested that I join his team, he convinced me and got me into this role,” he comments on what a fundamental turn has meant for him in recent years. “This is life for me and what sustains me; the best exercise for my age because my legs no longer work well; and so is the fantastic camaraderie that exists in the group ”, García acknowledges.

Asked if he feels like a super man or something similar, Don Paco denies on the fly. “I’m just a man who doesn’t want to die sitting down,” he flatly states. Maybe an example for some? “That maybe yes, but not for young people, who ignore it, but rather for retirees. That they do not remain prostrate at home waiting for the time to come. You have to continue living life and entertain yourself with what you like … until the rope runs out ”, he repeats as an idea etched into his daily way of being.

Nor does Don Paco know how to specify the secrets to have reached this age and also to do so in an enviable state. “What do I know? Perhaps it is something genetic, since I had a paternal uncle who died at 95, while my mother did at 93 ”, he explains. Decades ago, Francisco’s youth is not that he has been very calm. “I was a smith, then I went to Brazil and worked as a toolmaker, I also worked as an adjusting mechanic, and as an accountant,” recalls García, who also reveals that he had made his first steps in the world of the basket. “I was one of the pioneers of basketball in the Canary Islands back in the 40s; I played for San Pedro and Victoria, and I even remember having come to Tenerife to play some games ”, he recalls about that time.

Now, his routine is not that it has much of particular. The days that he trains in the pool he gets up “at 8” and the first thing he does is “eat a fruit smoothie and then a cup of milk with cereals.” “I have lunch as normal, and what is true is that I eat little dinner,” he adds, while the rest of the day he tries to “be entertained with the computer.” “I have always been very restless and before I was dedicated to crafts and a lot of other things, but now my legs do not help me to stand so many hours,” he concludes. This is how Don Paco will continue until life allows it. Life and the pandemic. “Because of him I can only go to training three days a week, and besides, I was thinking of going to Japan [en relación a los Juegos Olímpicos], but with all this … ”, he adds ironically, another of the motors that makes his“ rope, although it is already quite rumbriente, it still turns ”.

Barcelona – Seville I Copa del Rey: Rakitic: “Our illusion is tremendous; for Bara it is an obligation”